Coronary artery disease (CAD), whose clinical manifestations are angina pectoris, acute myocardial infarction (AMI), sudden death, or ischemic cardiomyopathy, is the leading cause of death in Brazil, according to the Information Technology Department of the Brazilian Public Health Care System (DATASUS)[1].

Ischemic cardiomyopathy is responsible for approximately 60% of the etiology of patients with heart failure (HF)[2], who may present variable degree of ventricular dysfunction.

When we evaluate the possibilities of treatment of these patients, they range from the prevention of reversible factors, such as CAD and hyperthyroidism, to clinical treatment that includes pharmacological and non-pharmacological strategies, cardiac resynchronization therapy and cardiac defibrillator implantation, and in the final stage of HF, the use of circulatory assistance devices as a bridge to heart transplantation (HTx) or as target therapy[3], all of these when optimized can preserve the quality of life and survival of these patients.

Other patients benefit from conventional surgical treatment aimed at myocardial revascularization (MR), isolated and/or concomitant with the treatment of dilation of the left ventricular cavity, secondary to the formation of areas of akinesia or aneurysm[4], as well as to the treatment of mitral regurgitation, resulting from ventricular remodeling due to chronic ischemia.

The surgical ventricular reconstruction (SVR) is a procedure used to treat advanced HF caused by systolic dysfunction and ventricular dilatation after AMI. It aims to reduce the volume and restore the ventricular shape of the heart[3].

SVR can be performed with different techniques; the indication and use of each one is based on the degree of deformity that the ventricular anatomy presents, as described by DiDonato[4]. Among the techniques described, we can cite the classic linear suture described in 1958 by Cooley[5], the geometric reconstruction techniques described by Jatene[6], the Dor’s technique[7], performed by reconstruction with the insertion of a patch in the left ventricle, and other similar techniques described in 1989 by Cooley[8] and/or in 1994 by Michelborough[9], all with positive results in both evolution and survival rates[6-8,10], as well as recent, multicenter studies, such as the RESTORE group[11] and the Surgical Treatment for Ischemic Heart Failure (STICH) trial[12-14].

When the possibilities of conventional clinical and surgical treatment are exhausted, and in view of the perpetuation of the HF, the possibility of treatment with transplantation is opened. This is considered the gold standard therapy for patients in terminal HF, however, there is a disproportion between donor supply and recipient demand. Data from the Brazilian Organ Transplantation Association (ABTO)[5] for the year 2016 showed that 357 HTx were performed in Brazil, but the estimated annual need for HTx was 1636.

To describe the outcome of left ventricular reconstruction surgery in candidates for HTx.

The studied population consisted of patients with ischemic cardiomyopathy and left ventricular aneurysm, who were followed up at the Heart Failure, Ventricular Dysfunction and Cardiac Transplant outpatient clinic of the Dante Pazzanese Institute of Cardiology from January 2010 to December 2016.

Thirty-four subjects who had been contraindicated to conventional surgical treatment were evaluated by the Cardiac Transplantation group, who, at a multiprofessional meeting, indicated the treatment of SVR, with or without MR and mitral valve intervention.

The surgical treatment of ventricular reconstruction was performed through:

- Endoaneurysmorrhaphy technique described by Dor[7], in which a patch is inserted inside the left ventricle on the contractile muscle, excluding all akinetic areas and reconstructing the ventricular cavity as it was before AMI, in addition to MR of all diseased coronary arteries.

Concomitantly and complementing the treatment of SVR, patients were or were not submitted to MR and valvar mitral intervention.

Data were evaluated by the Statistical Package for the Social Sciences (SPSS) software, version 19. The categorical variables were presented in percentage. General survival and according surgical technique were determined by the Kaplan-Meier curve and a difference test between the log-rank curves was performed. For analysis of the quantitative variables, a univariate Cox regression model was applied. For functional classification (FC) analysis, a McNemar test was used to evaluate the improvement or worsening of it. Significance value of P≤0.05 was established.

This study was approved by the Ethics and Research Commission (CEP) of the Dante Pazzanese Institute of Cardiology with CAAE 65671917.1.0000.5462 and protocol number in CEP 4738.

Table 1 shows the baseline characteristics of the 34 patients who composed the study.

The Jatene’s technique was used in 12 patients (35.29%). All of them were revascularized (100%) and in two (16.6%) patients there was mitral valve intervention, a plasty repair and a valve replacement.

When analyzing the Kaplan-Meier survival curve according to the surgical technique employed (Figure 1), no significant difference was observed, P≥0.5. 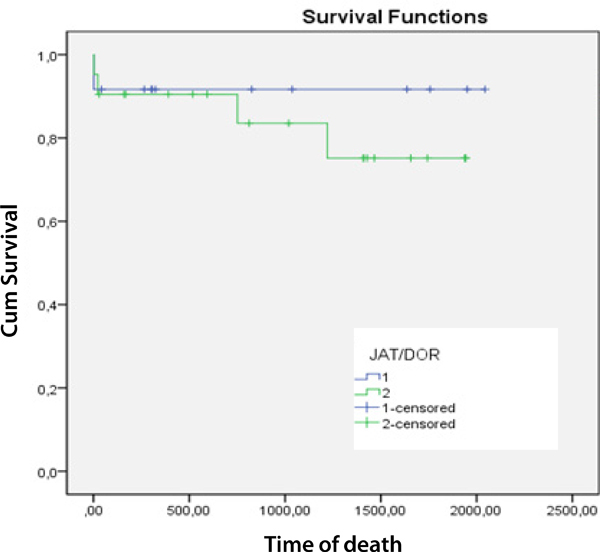 The intra-aortic balloon in the immediate postoperative period was used in one (2.94%) patient, who underwent Dor’s technique exclusively.

When evaluating the European System for Cardiac Operative Risk Evaluation (EuroSCORE) II of the patients, we observed that the mean value was 6.29, with a predictor of mortality with significance, P≤0.01. The hazard ratio (HR) was 1.16, with a 95% confidence interval (CI) between 1.02 and 1.31.

After analyzing the evolution of the FC (Figure 2) in the postoperative period, we observed that the main improvement was from patients in FC II to FC I (66.7%) and patients in FC III to FC I (25%). When the McNemar test was applied in the FC analysis, there was an improvement ratio on the same score with odds ratio of 2.71, however with no significance, P≥0.1.

Fig. 2 - Evolution of the pre and post-operative functional classification. 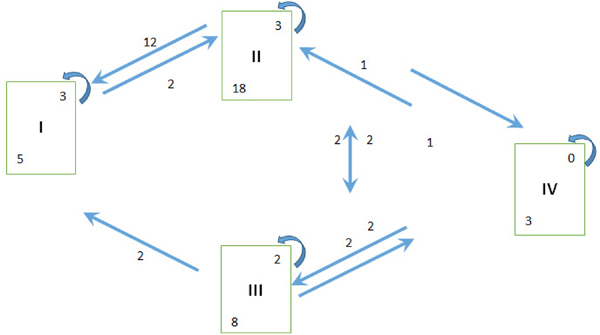 Fig. 2 - Evolution of the pre and post-operative functional classification.

When excluding the five patients who died in the hospital and late phases, 29 patients remain, of which 24 are in the control of the coronary insufficiency by the outpatient clinic, with seven having HF, 14 being asymptomatic, one presenting complication of peripheral vascular disease, one having a stroke, and one with cardiac arrhythmia. Five patients with HF are followed by the cardiac transplantation outpatient clinic, one of them in priority for HTx.

General survival was 85.3%, with an average follow-up of two years and eight months (one month - five years) (Figure 3). There is a general survival rate of patients up to 2,000 days after procedure. 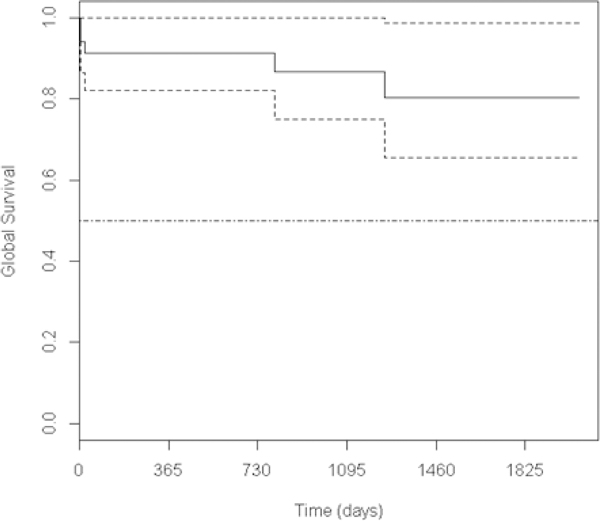 The surgical ventricular reconstruction (SVR) was described as an effective and efficient technique, regardless of the technique employed[17,18], allowing patients to have clinical improvement and increased survival, as described by Cooley[5], Jatene[6], Dor[7], Cooley[8], Michelborough[9], Dinkhuysen[10], D’Mello[19], and Tekümit[20]. Despite the results described, the search for more scientifically consistent information led to multicenter studies, such as that developed by the RESTORE group[11], which achieved a five-year survival rate of 68.6%, with improvement of the preoperative FC of 67% in class III-IV and 85% in postoperative functional class I-II. Concomitantly, other authors, such as Adams[21], evaluated the STS registry from 1996 to 2005, and found that, in a group of 89 patients with 28 patients with EF < 25% and 61 patients with EF > 25%, the hospital mortality rate was 3.4 (without significance), but with total survival in five years of 82%, being 69.6% in the EF group < 25% and 88.3% in the EF group > 25%, with significance. However, the search for a better evaluation was performed through a multicenter, randomized study, the STICH Trial[12-14], which investigated two hypotheses. The first one compared patients in clinical treatment against clinical treatment and MR, and in the second hypothesis, patients were compared in clinical treatment and MR against clinical treatment, MR, and SVR. The results obtained in this study did not demonstrate advantage in the treatment group of ventricular reconstruction, but methodological failures have been described and defined; according to Athanasuleas[22], presence of viability test was only observed in 27.6% of the patients with ventricular reduction in 19%, while, in other studies, it was reported > 30% of ventricular reduction, as well as a reduction in the volume of the inadequate left ventricle in 44% of the patients and in 18.5% of patients with SVR without left ventricular volume reduction. Therefore, the European Society of Cardiology/European Association for Cardiothoracic Surgery (ESC/EACTS) contradicts the conclusion of the STICH Trial and recommends that MR surgery and SVR should be considered in patients with left ventricular end-systolic volume index (LVESVI) > 60 ml/m2 and aneurysm in the territory of the anterior interventricular artery in centers with high level of experience.

After the outcome of the STICH Trial’s hypothesis 2, research on the treatment of SVR was intensified, and authors like Isomura[23] demonstrated that this procedure is more effective when 33% of ventricular reduction is obtained and LVESVI < 90 ml/m2, as well as there is no long-term benefit when SVR induces a left ventricular volume reduction < 15% and leaves residual LVESVI > 90 ml/m2. Calafiore[24], in a group of patients with ischemic mitral insufficiency in 90.3% of them and NYHA III-IV in 77.9%, with mean EF of 26%, and akinetic areas at the site of ventricular scar in 86.7%, demonstrated no deaths from any cause and NYHA III-IV in 61%.

The results obtained in this study showed a general mortality rate of 14.7%, with a hospital rate of 8.82% and late death of 5.88%, as well as total survival rate in five years of 85.3%. Of the analyzed variables, the change in FC and EF, although not statistically significant, showed a not insignificant clinical improvement. We believe that the result was a consequence of the limited number of patients.

Based on these data, we maintain the opinion in favor of the indication of SVR for patients with ventricular dysfunction and candidates for HTx. This opinion is based on two pillars: the first being the impossibility of having enough heart donors in Brazil and in the whole world, perpetuating a restricted demand, which in Brazil, in the year 2016, left an estimated deficit of 1,279 transplants. Secondly and not least, the Brazilian survival result of HTx[15], a treatment considered gold standard for patients with end-stage HF, presented values of 73% in the first year and 63% in five years. Survival data from the International Society of Heart and Lung Transplantation (ISHLT)[25] for HTx were 81.97% in the first year and 69.64% in five years.

We believe that the limitation of this study is related to the small number of patients, as well as to the study design, because it is retrospective and single-center.

The surgical treatment of left ventricular reconstruction in patients who are candidates for HTx is effective, efficient, and safe, providing an adequate survival rate.

This research respected the principles of the Declaration of Helsinki, good clinical practice, and the confidentiality of data obtained.

CAMC Substantial contributions to the conception or design of the work; or the acquisition, analysis, or interpretation of data for the work; drafting the work or revising it critically for important intellectual content; agreement to be accountable for all aspects of the work in ensuring that questions related to the accuracy or integrity of any part of the work are appropriately investigated and resolved; final approval of the version to be published

PXO Drafting the work or revising it critically for important intellectual content; final approval of the version to be published

AFSA Drafting the work or revising it critically for important intellectual content; final approval of the version to be published

MAF Drafting the work or revising it critically for important intellectual content; final approval of the version to be published

JMRN Drafting the work or revising it critically for important intellectual content; final approval of the version to be published

PC Drafting the work or revising it critically for important intellectual content; final approval of the version to be published