Is Hypoalbuminemia a Predictor for Acute Kidney Injury after Coronary Bypass Grafting in Diabetes Mellitus Patients?

Objective: Acute kidney injury (AKI) is one of the most important complications after coronary artery bypass grafting (CABG) procedure. Serum albumin, which is an acute phase reactant, is suggested to be associated with AKI development subsequent to various surgical procedures. In this study, we research the relation between preoperative serum albumin levels and postoperative AKI development in diabetes mellitus (DM) patients undergoing isolated CABG.
Methods: We included a total of 634 diabetic patients undergoing CABG (60.5±9.1 years, 65.1% male) into this study, which was performed between September 2009 and January 2014 in a single center. The relation between preoperative serum albumin levels and postoperative AKI development was observed. AKI was evaluated and diagnosed using the Kidney Disease: Improving Global Outcomes (KDIGO) classification.
Results: AKI was diagnosed in 230 (36.3%) patients. Multiple logistic regression analysis was performed to determine the independent predictors of AKI development. Proteinuria (odds ratio [OR] and 95% confidence interval [CI], 1.066 [1.002-1.135]; P=0.043) and low preoperative serum albumin levels (OR and 95% CI, 0.453 [0.216-0.947]; P=0.035) were found to be independent predictors of AKI. According to the receiver operating characteristic curve analysis, albumin level <3mg/dL (area under the curve: 0.621 [0.572-0.669], P<0.001) had 83% sensitivity and 10% specificity on predicting the development of AKI.
Conclusion: We observed that a preoperative low serum albumin level was associated with postoperative AKI development in patients with DM who underwent isolated CABG procedure. We emphasize that this adjustable albumin level should be considered before the operation since it is an easy and clinically implementable management for the prevention of AKI development.

Twenty to 30% of all patients undergoing coronary artery bypass grafting (CABG) are diabetic[1]. Patients with type 2 diabetes mellitus (DM) have been reported to show high morbidity and mortality rates following CABG operations[1]. Type 2 DM is reported to increase postoperative acute kidney injury (AKI) development rates in patients undergoing CABG surgery[2,3]. AKI, which is not rarely seen after cardiac surgery, is associated with increased morbidity and mortality rates. AKI subsequent to cardiac surgery is diagnosed in 5-30% of the patients and renal replacement therapy is required in 1-2% of them[4]. And AKI subsequent to CABG is also associated with longer intensive care unit (ICU) and in-hospital stays and increased rates of hemodialysis requirement and chronic renal failure[5]. Serum albumin, which is a plasma protein that has an important role on the regulation of plasma oncotic pressure, is also is an acute-phase reactant. The normal range of albumin in serum is 3-5 g/dL[6]. In many studies, hypoalbuminemia subsequent to cardiac surgical procedures was found to be associated with increased rates of mortality and morbidity[7,8]. There are also studies showing that hypoalbuminemia is associated with AKI development after various surgical procedures[6]. In this study, we aimed to research the relation between preoperative serum albumin levels and postoperative AKI development in selected patients with DM undergoing isolated CABG surgery.

This study was performed retrospectively on the perioperative data of 634 diabetic patients undergoing isolated CABG surgery in a single-center between September 2009 and January 2014. Of the patients, 65.1% (n=413) were male and 34.9% (n=221) were female. The average age was 60.5±9.1 years. After the local ethical committee approval, the data of the patients were collected from the archive records, hospital data recording program, patients' discharge summaries, operative reports, laboratory results, and radiological images. In this study, the relation between preoperative serum albumin levels and postoperative AKI development was observed. The AKI developing and non-AKI groups were compared.

AKI was diagnosed and evaluated according to the Kidney Disease: Improving Global Outcomes (KDIGO) classification[9]. The stages of AKI based on KDIGO classification are:

Stage 3: 3.0 mg/dL or more multiplied by baseline SCr; increase in SCr ≥ 4.0 mg/dL; or beginning of renal replacement therapy regardless of a previous KDIGO stage.

In this study, HT was defined as a history of antihypertensive drug intake or blood pressure measurement ≥140/90 mmHg. In addition, DM was defined as history of antidiabetic drug intake or a measured fasting blood glucose level >126 mg/dL[10]. Peripheric venous blood of 5 to 7 cc was drawn to ethylenediaminetetraacetic acid (EDTA) vacutainers to prevent clotting from all the patients prior to surgery. All the hemogram parameters were measured in automatic Abbott CELL-DYN 3700 (Abbott Laboratory, Abbott Park, Illinois, USA) analyzers.

Throughout the operation, blood glucose levels of the patients were evaluated conservatively, once before the CPB and then at hourly intervals with blood gas measurements. Crystallized insulin (Humulin R(r), Lilly, Indianapolis, USA) was applied intravenously to control high blood glucose levels. In the ICU, all patients' blood glucose levels were regulated with an insulin infusion according to the Portland protocol[11]. The total of the measured values was divided by the number of measurements to determine the mean blood glucose value during the operation for each patient. All surgical procedures were performed according to on-pump modern principles during CABG surgery. During the operation, following the routine application of anaesthesia, a median sternotomy was applied. A non-pulsatile roller pump and membrane oxygenator was used for CPB in all patients. The surgical procedure was performed at moderate systemic hypothermia (28°C-30°C). CPB was applied in a manner so that the flow rate was 2.2-2.5 L/min/m2, mean perfusion pressure was 50-80 mmHg, and hematocrit values were 20%-25%.

Statistical analysis was performed using the Statistical Package for Social Sciences (SPSS) software (SPSS version 21.0, IBM, Armonk, New York). Continuous variables with normal distribution were presented as mean (standard deviation [SD]), non-normal variables were reported as median (interquartile range [IQR]), and categorical variables were reported as percentage. Univariate comparisons between groups were performed using the chi-square test for categorical variables and the Student's t-test or Mann-Whitney rank sum test for continuous variables, as appropriate. Variables with a P-value <0.05 in univariate analysis were assessed in the multiple logistic regression model to determine the independent predictors of postoperative AKI. Receiver operating characteristic (ROC) curves were plotted to determine the optimal cut-off values for individual parameters in order to predict AKI and to establish the optimal cut-off points for use in clinical decision making. One-way repeated measure analysis of variance (ANOVA) was used to determine the change for creatinine over the first three postoperative days. A P-value <0.05 was considered to be significant. 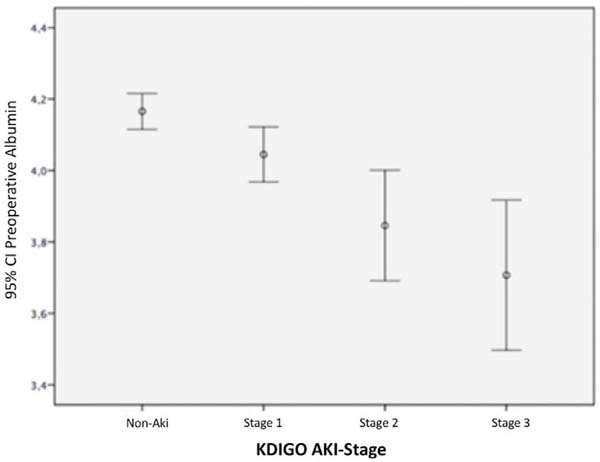 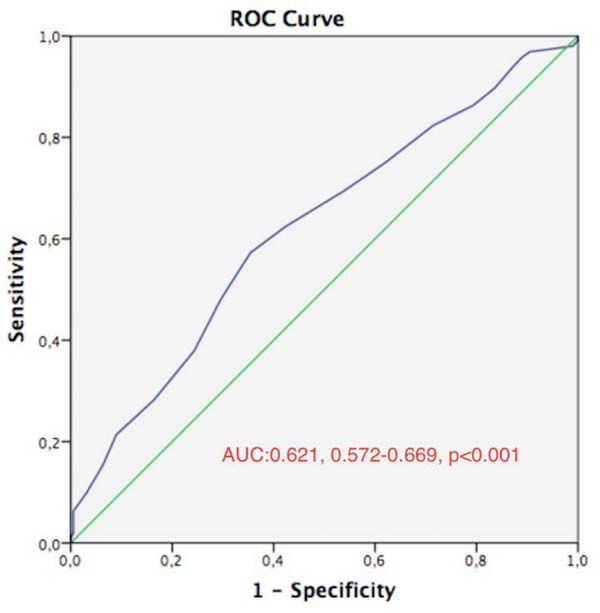 A one way-repeated measures ANOVA was conducted to determine the SCr level over the first three postoperative days in AKI and non-AKI groups. The assumption of sphericity was violated (Mauchly's test P value <0.001). There was a statistically significant change in creatinine level over three days in both groups. A significant increase in creatinine levels on postoperative first, second, and third days was observed in the AKI group (Figure 3).

AKI following CPB is an important cause of morbidity and mortality[12]. In this study, our aim was to research the effect of preoperative low serum albumin levels on postoperative AKI development in diabetic patients undergoing isolated CABG operation.

Albumin is the primary protein to maintain the plasma oncotic pressure as it obtains 70% of the oncotic pressure[17]. It's an anti-inflammatory, antioxidant, and anticoagulant protein. Hypoalbuminemia is an indicator for liver and renal insufficiency. And hypoalbuminemia was found to be associated with increased mortality and morbidity subsequent to various surgical procedures in many studies[6]. Many studies have shown albumin not only to be an inflammatory marker but also an AKI predictor. Also, hypoalbuminemia is a strong predictor for end-stage renal failure. Albumin protects renal function by increasing the oncotic pressure in coronary artery disease patients, it provides the continuation of renal perfusion and improves the glomerular filtration, and it protects the kidneys from toxic agents. The effect of hypoalbuminemia on postoperative renal failure was shown in many studies[6,18,19]. Foley et al.[20] showed that there is a strong correlation between hypoalbuminemia and ischemic heart disease. The same study revealed the need for hemodialysis in patients with low albumin levels in the same group of patients[20]. Wiedermann et al.[21] showed hypoalbuminemia as an independent risk factor for AKI.

Engelman et al. found low BMI and low serum albumin levels associated with high postoperative mortality and morbidity in a study with 5168 CABG patients. The same study revealed that a low serum albumin level (<2.5g/dL) is an independent risk factor for postoperative bleeding, prolonged ICU stay, prolonged mechanical ventilation, and renal failure. This study also showed that a high BMI is related with increased sternum and saphenous vein wound infection risk[7]. However, our study found out that a high BMI is an independent risk factor of postoperative AKI development.

Serum albumin level <3 g/dL is an independent risk factor for AKI development in the isolated diabetic patients who underwent CABG surgical procedure. We emphasize that this adjustable albumin level should be considered before the operation since it is an easy and clinically implementable management for the prevention of AKI development.

RA Substantial contributions to the conception or design of the work; or the acquisition, analysis, or interpretation of data for the work; final approval of the version to be published

TA Substantial contributions to the conception or design of the work; or the acquisition, analysis, or interpretation of data for the work; final approval of the version to be published

EY Substantial contributions to the conception or design of the work; or the acquisition, analysis, or interpretation of data for the work; final approval of the version to be published

DC Substantial contributions to the conception or design of the work; or the acquisition, analysis, or interpretation of data for the work; final approval of the version to be published

MS Substantial contributions to the conception or design of the work; or the acquisition, analysis, or interpretation of data for the work; final approval of the version to be published

CK Substantial contributions to the conception or design of the work; or the acquisition, analysis, or interpretation of data for the work; final approval of the version to be published

MBR Substantial contributions to the conception or design of the work; or the acquisition, analysis, or interpretation of data for the work; final approval of the version to be published