Atherosclerotic coronary artery disease is prevalent in the world population and coronary artery bypass grafting (CABG) surgery is one of the most accomplished and studied procedures in the history of contemporary surgery[1].

Even with the use of arterial grafts, the great saphenous vein continues to be widely used, and the graft is more common in CABG surgeries[1]. Although the clinical examination suggests the location of the saphenous vein, especially in the calf and distal segment of the leg, its origin in the proximal thigh segments remains unknown until surgical exploration[2]. In addition, methods to predict the viability of this venous graft prior to surgery are not always used, which may lead to increased morbidity for the patient. This may occur if the great saphenous vein is considered unsuitable for use in CABG surgery in the perioperative period, with the need for dissection of the saphenous vein in the other leg or for obtaining an alternative graft. Complications in the operated leg are not infrequent, such as the presence of infections with wound dehiscence, paresthesia, distal edema, lymphangitis, and erysipelas[1-3]. There is also the possibility of ischemic ulcers in patients with associated peripheral vascular disease.

The clinical presentation of the infection may vary from localized cellulitis to an extensive involvement of soft tissues, with drainage of secretions and areas of extensive necrosis[7]. Infections occur in 1% to 5% of saphenectomies and the processes of delayed healing can reach 10%[8].

Technical modifications were introduced to reduce complications, such as the use of incisions in the leg initiated about 5 cm above the medial malleolus, extending proximally[9]. Also commonly used is saphenectomy with small staggered incisions, where interspersed incisions are made with skin islands in the saphenous vein pathway, and early recovery with this technique was reported by Tevaearai et al.[10]. Recently, minimally invasive techniques of endoscopic saphenectomy would be related to lower rates of infection, hematoma, seroma, and shorter hospitalization time. However, new studies are needed to investigate the patency equivalence of the endoscopically dissected graft compared to classical saphenectomy[11].

The use of Doppler ultrasonography for preoperative saphenous mapping may be useful in the evaluation of saphenous vein characteristics and abnormalities, such as diameter, presence of ectasias, sclerosis, thrombosis. Ultrasound studies have demonstrated anatomical changes of the saphenous vein in more than 30% of the limbs[12]. With precise knowledge of the anatomy of the great saphenous vein, a direct incision can be made on the marked vein segment, avoiding large dissections, detachments and, consequently, bruising[2]. In addition, the study of saphenous vein characteristics may guide the choice of the leg for dissection, avoiding unnecessary incisions if the graft is inappropriate for use in myocardial revascularization surgery, reducing greater risks of surgical site infection and prolonged hospital stay with consequent cost increase.

Doppler vascular ultrasonography is a noninvasive, inexpensive and easy-to-apply method for mapping the great saphenous vein. It can be performed at the bedside, with reproducible results in evaluating the quality and viability of the venous graft, and may be useful in guiding the incision in the leg for guided dissection of the great saphenous vein. This could avoid inadvertent dissection of non-viable grafts, providing the choice of the best graft, and facilitating the procedure in order to avoid inherent complications.

Thus, the present study aims to analyze the use of vascular ultrasonography to map the saphenous vein in the preoperative period of myocardial revascularization surgery to define viability and the best site for venous graft dissection, and its impact on the reduction of unnecessary incisions and complications.

The reduction in the frequency of infection, wound dehiscence, hematoma or seroma and the need for contralateral saphenectomy due to inadequate graft were analyzed.

The venous mapping was performed with the patient in orthostatism, external rotation of the leg and slight knee flexion. In the patients who could not stand up, it was used a tourniquet at the thigh root with a 1-inch Penrose drain to occlude the saphenous vein distal to the saphenofemoral junction. Initially the saphenofemoral junction was found, and the great saphenous vein was followed throughout its path, distally within the saphenous envelope. Venous diameter measurements were performed: on the proximal third of the thigh, close to the saphenous arch, medial third of the thigh, knee, middle third of the leg and distal third of the leg, anterior to the medial malleolus. Saphenous vein diameters between 2 mm and 5 mm were considered normal[3]. Diameters smaller than 2 mm were considered unsuitable for graft use. Diameters greater than 5 mm were considered as dilatation, and above 8 mm, graft use was contraindicated. Absence of the great saphenous vein, patency, signs of chronic occlusion, thrombosis, presence of discontinuous segments, focal dilations and precise location of the vein were also evaluated as criteria for the adequacy of the conduit for a CABG surgery.

Another 67 patients underwent CABG surgery with the use of a dissected saphenous vein with staggered incisions in the right lower limb without prior ultrasonographic examination (Group 2), with similar characteristics in relation to age, presence of diabetes, smoking and PAD.

The evaluation of operative wounds in the lower limbs was performed on the 1st and 5th postoperative days, with direct visualization during hospital admission by the surgeon and telephone contact on the 30th postoperative day. In case of doubt, the patient was advised to return to the outpatient clinic for a new visual evaluation. The presence of hematoma, seroma, wound infection, dehiscence, necrosis and need for resuturing were evaluated.

Primary outcomes: Need for contralateral incision due to inadequate graft in the previously selected limb, infection, suture dehiscence, seroma or hematoma at the surgical site, necrosis, need for resuturing.

The groups were matched for age, weight, height, body mass index (BMI), sex, presence of diabetes, PAD and smoking, and there was no statistical difference between the subgroups, except for weight (Table 1).

The need for opening of both legs occurred in 6 (3.87%) patients in Group 2, due to inadequate or nonexistent graft in the leg initially selected by the surgeon. This outcome did not occur in Group 1 (P=0.0067).

Table 3 - Complications in the operative wound of the saphenectomy.

Table 3 - Complications in the operative wound of the saphenectomy.
Fig. 1 - Frequency distribution bar graph of complications in groups of patients with and without mapping in the immediate postoperative period, with 5 and 30 days. 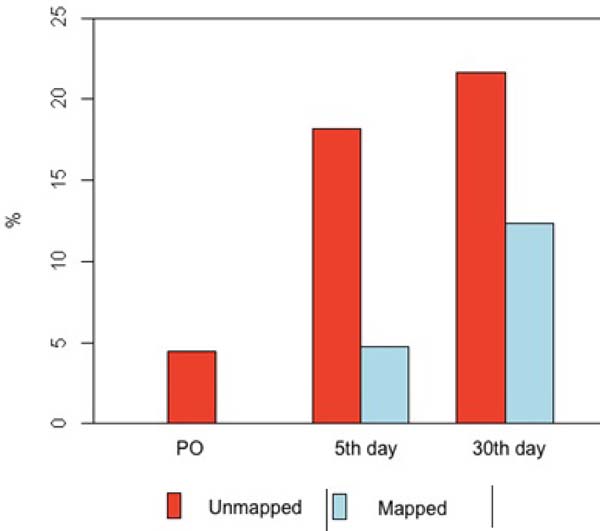 Fig. 2 - Odds ratio of patients with and without mapping on the 5th and 30th postoperative days and total up to the 30th day.

The selected groups presented similar characteristics and the difference in weight did not interfere in the BMI, which was similar in both groups. The direct impact of risk factors, diabetes, smoking, BMI, PAD on the incidence of surgical wound infection and poor healing was not assessed in this study. These factors were considered only in group correspondence.

The fact that the opening of the contralateral leg did not occur in Group 1 indicates a good accuracy of the method in identifying and evaluating the graft quality.

The follow-up stratification sought to find a higher incidence of hematoma, seroma, and suture dehiscence between the 1st and 5th postoperative days, which were directly related to the need for greater detachment and technical difficulties in dissection, with a significant difference of events in the 5th postoperative day. On the 30th postoperative day, the expectation was a higher incidence of infection, dehiscence, necrosis and need for resuturing. Despite an absolute greater number of events of these categories at this time, this was not statistically significant in the comparison between groups. This fact may be due to an insufficient sample to prove the statistical power. However, the total number of events over 30 days was significant, demonstrating benefit of the intervention.

Previous studies evaluating complications at the site of saphenectomy for CABG showed an incidence of infection similar to that found in the unmapped group. Belczak et al.[1] found 25% surgical saphenectomy wound infection, where dissection was performed by staggered incisions without previous marking, whereas 31% of the complications (hematoma, seroma, infection, dehiscence) were found in the unmapped patient group. Gelape[6] reported, in a literature review, similar numbers, with an incidence of complications at the site of saphenectomy reaching 30%. The complication rate of the surgical wound of saphenectomy in this study, of 12% among patients submitted to pre-marking ultrasound, reinforces the efficiency of the method in reducing events.

The deaths observed in the control group, despite having statistical significance, cannot be associated with the use of vascular ultrasonography in this study, since it was not designed with this objective. In addition, there was no consequent deaths from saphenectomy site infection.

The use of vascular ultrasonography for the great saphenous vein mapping in isolated myocardial revascularization surgery confers an adequate accuracy in the identification of the grafts, and seems to have a good relation in the evaluation of its quality, being able to measure its dimensions with precision. In this study, we observed a lower incidence of complications related to the dissection of the great saphenous vein in the mapped patients, with statistical significance.

As a noninvasive method of easy application, it should be routinely used in myocardial revascularization procedures. New studies with cost/benefit assessment may be useful for evaluating and implementing the method in cardiac surgery services.

FCL Substantial contributions to the conception or design of the work; or the acquisition, analysis, or interpretation of data for the work; final approval of the version to be published

OWBO Substantial contributions to the conception or design of the work; or the acquisition, analysis, or interpretation of data for the work; final approval of the version to be published

DGM Substantial contributions to the conception or design of the work; or the acquisition, analysis, or interpretation of data for the work; final approval of the version to be published

MAS Substantial contributions to the conception or design of the work; or the acquisition, analysis, or interpretation of data for the work; final approval of the version to be published

JLRO Substantial contributions to the conception or design of the work; or the acquisition, analysis, or interpretation of data for the work; final approval of the version to be published

CBC Substantial contributions to the conception or design of the work; or the acquisition, analysis, or interpretation of data for the work; final approval of the version to be published

GLF Substantial contributions to the conception or design of the work; or the acquisition, analysis, or interpretation of data for the work; final approval of the version to be published

PC Substantial contributions to the conception or design of the work; or the acquisition, analysis, or interpretation of data for the work; final approval of the version to be published

LCBS Substantial contributions to the conception or design of the work; or the acquisition, analysis, or interpretation of data for the work; final approval of the version to be published