OBJECTIVE: The aim of this study was to evaluate possible interactions among Angiotensin-I converting enzyme genotype, insertion/deletion polymorphism and atherosclerosis of vein grafts in Iranian patients, and characterize their clinical and demographic profile.
METHODS: In this cross-sectional study, patients who underwent coronary artery bypass graft surgery more than five years ago, were included for angiographic analysis. Atherosclerosis was determined by quantitative angiography and adjusted Gensini score. The gene angiotensin converting enzyme I/D polymorphism was detected by polymerase chain reaction.
RESULTS: A total of 102 patients participated in this study. Eighty-four patients were male. The frequency distribution of DD, ID and II polymorphism were 23.6%, 62.7% and 13.7% respectively. There were no differences among genotypic groups in age, sex, number of risk factors, number of vein grafts and months since bypass surgery. According to adjusted Gensini score [0.18±0.12 (II) vs. 0.11±0.09 (ID) and 0.1±0.09 (DD) P=0.021] the II genotype was associated with severity of vein graft atherosclerosis.
CONCLUSION: Although there are conflicting results about gene angiotensin converting enzyme I/D polymorphism and the degree of venous bypass graft degeneration, this study suggests an association between ACE genotype II and atherosclerosis of saphenous vein grafts, however, large samples considering clinical, demographic and ethnic profile are necessary to confirm these results.

A majority of patients receive saphenous vein grafting (SVG) to most vessels, with the exception of the left anterior descending coronary artery[6]. Large diameter and wall characteristics, being plentiful, long and easy harvest has made SVG the most commonly used conduit, but its longevity, as compared with arterial graft, is not satisfying. SVG patency is 95% at 1 week, 84% at 1 year, 80% at 3 years, 69% at 6 years, and 61% at 10 years after operation[7]. Thrombosis, intimal hyperplasia and atherosclerosis account for graft failure in early (less than 1 month), subacute (one to 12 months) and late (more than 12 months) post CABG periods[8-11].

During past decades, many studies have shown genetic risk factors are as important as conventional risk factors in the development and progression of atherosclerosis[12,13]. Clinical assessment of the relationship between preoperative use of angiotensin-converting enzyme (ACE) inhibitors and clinical outcomes after CABG is discussed elsewhere[14]. One of the most significant genetic risk factors is the ACE gene insertion/deletion (I/D) polymorphism[15]. ACE encoding gene is located on chromosome 17 (17q23) and the presence (insertion) or absence (deletion) of a 287-bp alu repeat sequence in intron 16 of the gene results in ACE (I/D) polymorphism. This polymorphism accounts for 47% of variations in ACE levels[16].

To our best of knowledge, the association of ACE (I/D) polymorphism and venous bypass graft degeneration in long-term periods has not been studied in Iranian patients, so the aim of this study was to evaluate possible interactions between ACE (I/D) polymorphism and atherosclerosis of vein grafts in Iranian patients, and characterize their clinical and demographic profile.

The research protocol of this cross-sectional study was approved by the institutional board of research ethics for human studies at the Isfahan University of Medical Sciences (Research project number # 389305).

Amplification was performed in DNA Thermal Cycler (Analytic Jena) with initial denaturation step at 94°C for 5 min followed by 30 cycles consisting of denaturation at 94°C for 1 min, annealing at 58°C for 1 min and extension at 72°C for 2 min, followed by final extension step at 72°C for 5 min. PCR products were separated on 1% agarose gel and DNA was visualized by ethidium bromide staining on UV transillumination imaging system. DNA fragment sizes were 190 bp for the D allele and 490 bp for the I allele.

To avoid DD mistyping, second PCR was carried out on DD genotype samples[24]. Second PCR was performed with an specific insertion primer pairs included 5'-TGG GAC CAC AGC GCC CGC CAC TAC-3' as a forward primer and 5'-TCG CCA GCC CTC CCA TGC CCA TAA-3' as a reverse primer in 25 µl reaction mixture volume. Second PCR steps consisted of initial denaturation at 94°C for 1 min followed by 30 cycles of denaturation at 94°C for 30 s, annealing at 67°C for 45 s and extension at 72°C for 2 min followed by final extension at 72°C for 5 min. Positive control samples (samples showed II genotype in first PCR) were used to confirm the reliability of genotyping. Presence of I allele resulted in PCR product of 335 bp.

Statistical analysis was carried out using SPSS version 20.0 and data were expressed as the mean±SD or percentage. Chi-square test, Fisher's exact test or Kruskal-Wallis test (where appropriate) was used for non-parametric variables and independent t-student test or one-way ANOVA test was used for analyzing the numerical data. P<0.05 was considered statistically significant. If statistically significant P value obtained by ANOVA, Bonferroni's post-hoc test was performed for pair wise comparison.

Demographic characteristics of the study population

Demographic characteristics and clinical features of the study population are shown in Table 1. The mean of months since CABG was 128.7±38.36. The proportion of occluded, diseased and free of atherosclerosis vein grafts were 42.12%, 26% and 31.88% respectively. 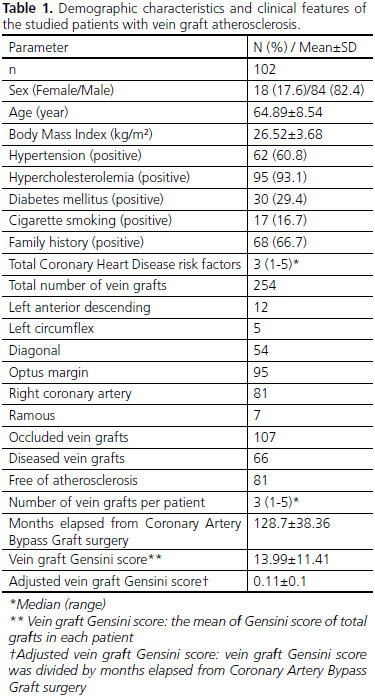 The results of our study show that ACE II genotype could be considered a risk factor for long-term graft failure after CABG. ACE II may have some roles in the progression of atheromatous plaque of vein grafts in earlier postoperative periods as compared with two other genotypic groups. Few studies about the influence of ACE I/D polymorphism on venous bypass graft atherosclerosis are available. Studies carried out in Turkey and Germany demonstrated different results[25-27]. Ortlepp et al.[25] reported ACE I/D polymorphism was not associated with venous bypass degeneration in the long term in their 101 studied patients. Dayi et al.[26] indicated DD genotype influenced vein graft occlusion in late postoperative period in their 87 consecutively selected patients. On the other hand, our study shows no statistical difference among ACE genotypic groups and the number of occluded vein grafts (P=0.64, Kruskal-Wallis test). In a study done by Völzke et al.[27] on 247 patients, they demonstrated ACE DD genotype increased the rate of mortality and cardiovascular morbidity in the midterm after CABG.

The results of the study of ACE I/D polymorphism and cardiovascular disease in Iranian population seem conflicting. The presence of D allele exacerbated the risk of early onset coronary artery disease in west population of Iran[32]. Shafiee et al.[33] showed different results. They reported no association between ACE DD genotype and the risk of coronary artery disease. They collected study population from patients referred to Shahid Rajaei Cardiovascular Medical and Research Center, Tehran, Iran[33]. Despite the adverse effect of ACE DD genotype on hypertension in type 2 diabetic population reported by Nakhjavani et al.[34], Nikzamir et al.[35] found no relation between ACE I/D polymorphism and the presence of metabolic syndrome in patients with type 2 diabetes.

We also think that the heterogeneity of our sample considering clinical profile, pharmacological treatment and lifestyle, as well as the surgical technique for myocardial revascularization, could influence the follow-up as well as its relation with the genetic profile. Lack of serum ACE activity measurement and also the small sample size are main limitations of this study.

Although there are conflicting results about ACE I/D polymorphism and the degree of venous bypass graft degeneration, this study suggests an association between ACE genotype II and atherosclerosis of saphenous vein grafts, however, large samples considering clinical, demographic and ethnic profile are necessary to confirm these results.

This study is result of a Doctor of Pharmacy thesis project which was financially supported by the Vice-Chancellery for Research and Technology of the Isfahan University of Medical Sciences. Authors would like to thank all personnel of the poisoning emergency room of the Noor and Ali-Asghar [PBUH] University Hospital for their sincere help. Authors would like to thank Mr. Rory O'Conner for final English editing.

34. Nakhjavani M, Esfahanian F, Jahanshahi A, Esteghamati A, Nikzamir AR, Rashidi A, et al. The relationship between the insertion/deletion polymorphism of the ACE gene and hypertension in Iranian patients with type 2 diabetes. Nephrol Dial Transplant. 2007;22(9):2549-53. [MedLine]

Financial Support: This study is result of a Doctor of Pharmacy thesis project which was financially supported by the Vice-Chancellery for Research and Technology of the Isfahan University of Medical Sciences.

Conflict of interest: All authors stated that they had no conflicts of interest.

NZ Collected the data and helped in data analysis; final approval of the manuscript

MH Contributed in designing and conducting the study; final approval of the manuscript

MM Contributed in designing and conducting the study; final approval of the manuscript

AMS Proposed the idea; managed the research project; rechecked the statistical analysis; prepared the manuscript and final approval of the manuscript