In the last decade, a considerable number of studies have proven that human umbilical cord blood (UCB) has hematopoietic stem cells (SCH) and a pool of mesenchymal stem cells (MSC). MSCs are capable of multilineage proliferation and differentiation, similarly to those observed in bone marrow cells.

These characteristics create expectations of using cellular therapies to regenerate tissues and organs affected by the so called incurable diseases, such as neurologic, cardiac, and kidney diseases, etc. Nevertheless, as these cells correspond to only a small portion of mononuclear cells present in each sample, it is necessary to isolate and multiply them in vitro.

Mesenchymal stem cells different isolation and culture protocols of umbilical cord blood have already been employed successfully, all involving one early stage of mononuclear cell separation using Ficoll-Paque density gradient [1-4]. Despite the positive outcomes observed in these groups, many studies have reported great difficulty to culture and maintain these cells in vitro, and others report a total failure in isolating and culture of these same cells [5-8].

All mesenchymal stem cell protocols of umbilical cord blood start with an isolation phase of mononuclear cells with Ficoll-Paque density gradient, which requires several manipulation and centrifugation phases of umbilical cord blood. This procedure increases the risk of contamination of UCB. In attempting to speed up the process making the mononuclear cell isolation processes faster, several methods have already been tested such as the use of poligeline, hydroxyethyl starch gel (HES) and gelatin to deplete red blood cells (RBC). Despite the efficacy of these procedures, the release of these products for clinical practice depends on the approval of the centers for disease control in several countries [9].

Moreover, these procedures also involve several phases of the manipulation process that increase the risk of contamination. Also, easy to handle and closely sealed filtration systems to concentrate mononuclear cells, the so-called SCF SYSTEM (the stem cell collection filter system), have already been tested. This system has proven to be more efficient and faster in separating mononuclear cells when in comparison to the conventional technique which uses Ficoll-Paque density gradient; however, the release of this system for clinical practice yet requires further studies [10].

Ten samples of UCB were collected from full-term placenta of healthy women, nonsmokers, nondrinkers, age ranging from 20 to 40 years, regardless ethnic group at the Obstetric Service of Hospital de Base Regional Medical School Foundation (FUNFARME) from the Medical School of São José do Rio Preto. Free written informed consent was obtained from the mothers or the next of kin following the guidelines of the local Institutional Review Board and Ethics Committee, according to certificate Nº 168/2005. Blood was collected in sterile syringes containing heparin sodium (1000 IU).

a) Method without Ficoll-Paque density gradient: UCB samples were transferred to centrifuge tubes (15 mL) and submitted to centrifugation at 1000 rpm for 10 minutes to obtain buffy coat. The buffy coat containing all nucleated cells present in UCB was transferred to a new centrifuge tube, which was washed out twice with culture medium through centrifugation at 1000 rpm for 8 minutes. The number of nucleated cells was estimated after counting into Neubauer chamber and cellular viability was determined by the Tripan Blue exclusion method.

b) Method with Ficoll-Paque density gradient: UCB samples were transferred to centrifuge tubes (15 mL) containing Ficoll-Paque solution and submitted to centrifugation at 2000 rpm for 30 minutes in order to isolate low-density mononuclear cells. Mononuclear cells were transferred to a new tube and washed twice with culture medium through centrifugation at 2000 rpm for 10 minutes, according the protocol described by Erices et al. [2]. Cell number estimate and viability followed the same procedure described for the nucleated cells.

a) Culture of Mesenchymal Stem Cell from nucleated cells: cultures were initiated in cell culture flasks of 25 cm2 at a density of 1x107 nucleated cells/cm2. Cells were nurtured with culture medium á-MEM supplemented with 20% fetal bovine serum, 1% antibiotic/antimycotic, and 1% glutamine. Cultures were incubated at 37ºC, humidified atmosphere containing 5% CO2. The first change of culture medium was performed 24-48 hours after initial plating to eliminate nonadherent cells. Posteriorly, the culture medium was changed at every four days and cellular growth assessed daily under an inverted microscope. When the cells reached 50-60% confluence, they were subdivided after trypsin/EDTA (0.025%) (Gibco-BRL).

b) Culture of mesenchymal stem cell from mononuclear cells: cultures were initiated in culture flasks of 25 cm2 at a density of 1.0x106 mononuclear cells/cm2, following the same procedures described for nucleated cells

Adherent cells were submitted to cytochemistry labeling with acid phosphatase (AP) and periodic acid-Schiff reactive (PAS), according to the protocol (with modifications) described by Erices et al. [3].

Ten samples were submitted to isolation protocols of nucleated and mononuclear cells. In isolation procedures of nucleated cells (without Ficoll) were obtained 2.0-13.0x107 (median of 2.35x107) cells/cm2. In isolation procedures of mononuclear cells (with Ficoll) were obtained 3.7-15.7x106 (median of 7.2x107) cells/cm2. In all cultured samples were observed adherent cells 24 hours after initial plating. After the second week of plating, the growth rate of the cultures from isolation with Ficoll decreased until complete stagnation. In the cultures from isolation without Ficoll only three samples kept their growth, forming confluent focuses of cells. These cultures were submitted to several phases of trypsinization for dissemination or subdivision and were kept in culture for period varying from two to three months. 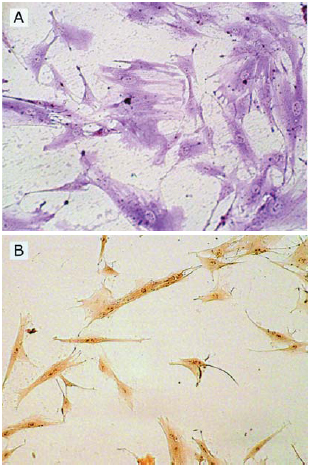 Our study examined comparatively the isolation and culture procedure of mesenchymnal cells of umbilical cord blood without Ficoll-Paque density gradient. This procedure, which enables to separate all nucleated cells present in the umbilical cord blood, was compared to the standard technique using Ficoll-Paque density gradient, which allows the selective isolation of mononuclear cells. The results show that both mononuclear cells and nucleated cells isolated from UCB, when cultured in vitro, were able to produce adherent cells with different morphologies. Among the cell types observed, we could see fibroblastoid-shaped elongated cells (spindle-shaped cells), egg-shaped cells similar to epithelioid cells, and rounded cells similar to osteoclasts (osteoclast-like cells).

Different studies with umbilical cord blood have identified similar cells, whose nature was determined by means of immunocytochemistry and cytochemistry labeling. Fibroblastoid cells (elongated) proved to be positive for mesenchymal cell markers and the rounded cells were positive for osteoclast markers. The confirmation that fibroblastoid cells corresponded to mesenchymal stem cells was established by their cellular differentiation capacity induced by growth factors [2,4,11-14].

In the present study, adherent cells were characterized cytochemistrically with PAS and acid phosphatase. PAS labels mesenchymal cells (fibroblastoids) positively and the osteoclasts (rounded cells) negatively, whereas acid phosphatase labels the osteoclasts (rounded cells) positively and the mesenchymal cells (fibroblastoids) negatively. The results obtained associated to morphological analysis indicate that the fibroblastoid cells correspond to the mesenchymal cells, thus demonstrating that it is possible isolate and culture these cells from UCB without using Ficoll-Paque density gradient.

Although in the present study specific mesenchymal stem cell markers have not been used and the induction of cellular differentiation to confirm the presence of stem cells, the intense cellular proliferation observed in the three samples is a predictor of the presence of stem cells. That's because, the differentiated cells or senescent cells have a limited life span, characterized by loss of proliferation capacity and morphology alteration, leading to culture stagnation [15].

The procedure to obtain nucleated cells without using Ficoll-Plaque density gradient has shown to be more efficient for the culture of mesenchymal stem cell from UCB when compared to the procedure using Ficoll-Paque density gradient. The possibility of isolating and plating mesenchymal cells without using Ficoll, which is clearly known to be toxic, has become the safest and fastest procedure. These results are preliminary and need further studies to be validated.

This study was carried out with the financial support of BAP (Researcher and Grant-holders) and Braile Biomédica Indústria, Comércio e Representações SA.