Multiple incisions with small skin bridges require traction on the vein to facilitate proper exposure of the vein under the created tunnel with technically difficult ligation of its side branch. This excessive surgical manipulation will leads to endothelial cell function impairment and reduces the bioavailability of nitric oxide [7-9]. Resulting endothelial injury will enhance the platelet and leukocyte adhesion that accelerate the intimal hyperplasia through the smooth muscle cell proliferation which is the common cause of vein graft occlusion [10-12]. The harvested and prepared saphenous vein depends on its functional integrity for immediate and long-term graft patency [13]. Leg wound complications related to saphenous vein harvesting account 3% to 30% in patients who undergo coronary artery bypass grafting [4,6].

We retrospectively analyzed data collected from 1,050 consecutive patients who had undergone coronary artery bypass grafting (CABG) with use of saphenous vein grafts (SVGs) from May 5, 2003 to December 31, 2007. Demographic characteristic and risk factors for patients are presented in Table 1. Patients having a redo CABG or other surgical intervention at the time of bypass grafting, early postoperative deaths, not related to infection were excluded at the beginning from the study groups (not included in the study groups). Patients that we couldn't find proper follow up in their medical files also were excluded from the study. Saphenectomy using traditional single long incision vein harvesting technique (Group 1) consisted of 650 (61.90%) patients. Saphenectomy using multiple short interrupted incisions leaving intact skin bridges (Group 2) consisted of 400 (38.10%) patients. Incisions type and gender of patients are presented in Table 2. In Group 1, the average age was 64.9 years (range, 39 to 83 years), in Group 2 the average age was 63.2 years (range, 36 to 80 years). 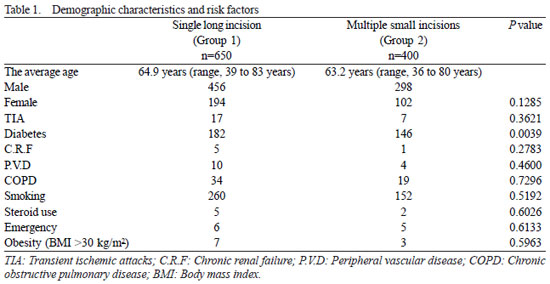 As our comparative study was directed to leg infections between two groups, we could not collect data about noninfective wound healing complications. Depending on World Health Organization standards, obese patients were classified if the body mass index (BMI) >30 kg/m2. Ten of our patients only with body mass index >30 kg/m2.

Demographic characteristic, risk factors, leg wound complications, discharge status, mortality, and hospital readmission was collected from the Summit Medical database by a cardiac surgeon. Wound complications were defined as inflammation, dehiscence, cellulitis, lymphangitis, drainage, necrosis, or abscess necessitating dressing, antibiotics or debridement before complete healing without eschar [5]. Leg wounds were assessed according to our post operative care protocol during daily round by cardiac fellow while patients were hospitalized. Then wounds were examined at discharge (5-7 day post surgery if there is no any surgical complications), after discharge at one week in the outclinic, and at 3 to 4 weeks after surgery by cardiac surgeon. Multiple logistic regression analysis was applied to look for independent risk factors for wound infection; these analyses include the technique of vein harvesting, age, sex, obesity, diabetes mellitus, hypertension, renal disease, peripheral vascular disease. Test results were considered significant when P <0.05. The study has been and approved through The Jordanian University of Science and Technology Institutional Ethics Committee - Jordan-Irbid.

After the general anesthesia, insertion of central venous line and arterial line, the patients were prepared with a supine position, with both legs externally rotated, semiflexed (frog-leg position) and elevated on rolled sheets that were placed under the thighs to avoid pressure on the peroneal nerve. Scraping was performed with povidone-iodine solution. In long incision group the incision was started one centimeter above and lateral to the medial malleolus or starting at the groin. The vein was identified, then the incision going along the whole course of long saphenous vein in different length variety depending on the amount of vein required. Using sharp and blunt dissection the vein was cleared from the adventitia and connective tissue. Side branches were ligated using 3/0 silk ties on the vein side and metal clips on the patient side.

The leg wound was closed in layers, insertion of closed-system drainage (redivac drain) in obese patients and the skin is approximated using skin metal clips. At the multiple incisions with small skin bridges group saphenous vein was harvested with leaving skin bridge between the 8-10 cm incisions. The techniques of vein harvesting and handling were similar to the single long incision group. Same suturing technique was used with the single incision group. In obese patients always we used closed-system drainage. At the end of the coronary bypass surgery, squeezing the leg from where the vein was harvested to evacuate the remnant accumulated blood and elastic bandage wrapping will be apply around used routinely in all patients.

Postoperative leg wound infections (Table 3) occurred more in the (Group 1) of patients (56/650, 8.6%) than in the (Group 2) of patients (13/400, 3.2%; P e=0.0005). Staphylococcus was the most common organism isolated from culture (45/69, 65.22%) in these patients. These complications responded to conservative treatment (antibiotics and regular dressings). No surgical intervention required in either group. Hospital stay is more prolonged in these patients between 10-16 days.

Recently endoscopic vein harvesting technique was established in some cardiac centers with well known advantages, but in many cardiac centers, cardiac surgeons still prefer the open techniques to harvest saphenous vein segments [19]. The incidence of wound complications increased in female sex patients, obesity, diabetes, lymphedema, peripheral vascular disease, and smoking [5]. We are comparing in our study the risk, and incidence of leg infections between two open saphenectomy techniques, the traditional single long incision, and less invasive technique using multiple incisions with small skin bridges, reviewing the experience at our institution.

After coronary artery bypass grafting surgery, leg wound complications at saphenous vein harvesting site account 3% to 30% [4,6]. In their prospective randomized controlled study, Mahmood et al. [13], by using Mayo stripper during saphenous vein harvest, showed that the vein traction during the manipulation of the vein as part of the technique does not affect the endothelial function in comparison with the traditional open harvest technique. The result by Tran et al. [20] showed that saphenous vein tunnelling is an attractive alternative to the open harvest technique in obtaining venous conduits for coronary artery bypass procedures, as they used a tunnelling technique always during harvesting thigh saphenous vein, but the open harvest technique with long incision was preserved in nearly a third of veins harvested for lower leg veins. In our study, with conventional open saphenectomy using a long continuous incision, we found that, female sex, obesity, diabetes, are factors that significantly increase the incidence of leg wound complications, as a result of increased length of incision.

This is a nonrandomized study in a new cardiac surgery center, as well as we are in the starting period in cardiac surgery since 6 years in the north of Jordan, our cases are more selective. We could not include in this study data about noninfective wound healing complications, like hematoma, lymphedema, ecchymosis, and wound dehiscence, neither proper assessment of pain in the study group patients. We could not found wide variation in complication rate between thigh or leg harvested site. We were unable to collect wound closure times, or the length of incisions in the multiple incisions with skin bridges. A prospective randomized study with a large number of patients from one surgeon will give us a proper comparison between two techniques, as will give a shadow over these negative points.

In our study we conclude that saphenectomy using multiple incisions with small skin bridges (tunneling) as a minimally invasive technique is easy, and give superior cosmetic outcome, and reduced wound complications, compared with traditional methods of vein harvest. Female sex, obesity and diabetes increase the risk for leg wound infection. In this group of patients we need more meticulous and less invasive surgical techniques to be applied.