Objective: The objective of this study was to evaluate the effect of leisure-time physical activity (LTPA) in the early outcome of coronary artery bypass graft surgery (CABG). Methods: This prospective cohort study analyzed 202 patients submitted to CABG. The patients were assigned to two groups, active or sedentary, according to the practice of LTPA in the preoperative period. The independent variable LTPA practiced by the patients in the previous year of the surgery was evaluated. The occurrence of the major adverse cardiac events as death, acute myocardial infarction, reoperation and the hospital stay after surgery were planned to be evaluated. Results: The mean age of patients was 62 ± 10 years, and 134 (66%) were men. Sixty-six (33%) patients practiced LTPA and were classified as active, and 136 (67%) were sedentary. The active group showed 78% less probability (OR= 0.22; CI 95%: 0.09-0.51) to suffer a MACE P<0.001 and a reduction of 33% in length of hospital stay as compared for sedentary patients (HR= 0.67; IC 95%: 0.49 - 0.93). P= 0.018. Conclusion: LTPA is an important predictor of major adverse cardiac events and hospital stay.

Physical activity is any bodily movement produced as a result of muscle contraction that results in caloric expenditure. Physical activity during leisure time (LTPA) is a wide range of activities based on personal interest and needs. These activities include formal exercise programs as well as walking, sports, dancing, gardening, among others. The common element is that these activities result in an energy expenditure, although the intensity and duration may vary considerably [11].

Some studies show that physical activity in preoperative period benefits the general surgical outcome [12-14]. However, few studies have assessed the effect of regular physical activity in patients referred for coronary artery bypass grafting (CABG)[15-17]. The effect of leisure-time physical activity (LTPA) in the preoperative period on the incidence of major cardiac events (MCE), immediately after surgery in patients undergoing CABG is not well reported. This study aimed to contribute to better understanding of the potential benefits of this practice.

A prospective cohort study on which 215 adult patients of both genders were assessed, who were hospitalized electively to undergo CABG procedure. Patients were recruited from three university hospitals.

The study was approved by the Ethics and Scientific Committee of the Institute of Cardiology of Rio Grande do Sul (IC/RS), Hospital de Clinicas de Porto Alegre (HCPA) and Santa Casa de Misericórdia de Porto Alegre (SCMPOA) and written informed consent from the patiets was obtained.

The study included consecutive patients referred for elective CABG, in stable clinical condition at the time of preoperative assessment, performed by the responsible team in each institution, and under conditions to perform the six-minute walk test. We excluded patients who underwent emergency surgery with acute coronary syndrome and concomitant congenital heart disease or terminal diseases. Patients with unstable angina and musculoskeletal impairment that could impair the accomplishment of the walking test were also excluded.

Patients were divided into two groups according to the LTPA practice:

To provide more consistency to this classification we used: Baecke Usual Physical Activity Questionnaire, which investigates the usual physical activity of the last 12 months and has been validated for the Brazilian population [19]. The six-minute walk test (6MWT) was performed according to standardized American Thoracic Society (ATS) [20]. The intensity level determined by the metabolic equivalent (MET) of each activity was derived from multiple sources, according to the Compendium of Physical Activities [21].

The surgical risk was determined by clinical risk score of the Cleveland Clinic, which is part of the protocol of preoperative assessment in the participating institutions [22]. Weight, height, waist and hip circumferences were measured by a standardized protocol.

The incidence of MCE (death, acute myocardial infarction and cardiac reoperation) and length of hospital stay were assessed. Patients were followed-up postoperatively with routine clinical examinations. MCE were diagnosed by the responsible physician.

The collected data were assessed using the software Statistical Package for Social Sciences (SPSS version 15.0). Categorical variables are presented in absolute frequencies and percentages. Continuous variables with normal distribution are presented as mean and standard deviation and those without normal distribution as median and interquartile ranges (IQ). To assess the demographic, anthropometric and clinical data, and make the comparison between the active patient group and the group of sedentary patients, we used the Student's t test for continuous variables and chi-square test for categorical variables. For comparisons of medians between two samples, we used the Mann-Whitney U-test.

Bivariate analysis was performed with use of chi-square test, where the following variables were included: age, gender, preoperative physical activity, smoking, dyslipidemia, peripheral vascular disease, chronic obstructive pulmonary disease, acute myocardial infarction, diabetes mellitus, cerebrovascular disease, hypertension and surgical risk. The variables that showed the sample descriptive level (P) of 0.20 - which allows to select variables that were not significant for being under the influence of confounding variables - were included in logistic regression and Cox regression.

In all tests, a P value < 0.05 was considered statistically significant.

Of the 215 patients interviewed, thirteen were excluded because they were not eligible for surgery. The others had follow-up performed in 100% of cases.

Demographic, anthropometric and clinical variables were shown in table 1. It is observed that the samples were similar in both groups, except for gender, in which the active patient group consisted mostly of men. 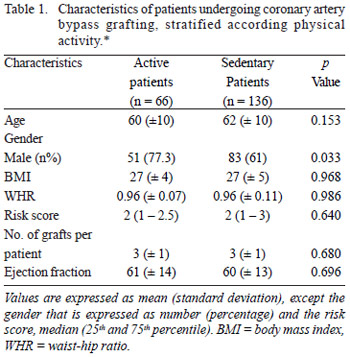 Comorbidities and medications used by patients in the preoperative period were described in Table 2. It is observed a greater proportion of patients using antiplatelet drugs in the group of active patients. 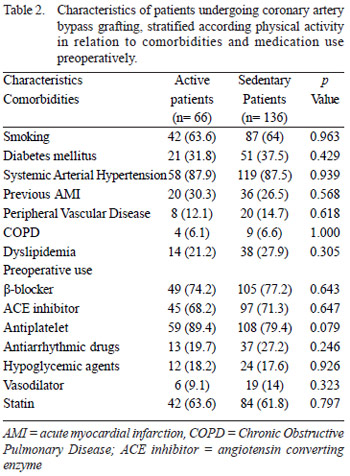 In Table 3 we note that in relation to the occurrence of MCE in the immediate postoperative period, both groups were similar, except death and AMI when analyzed as a composite outcome, with a higher prevalence among sedentary patients. 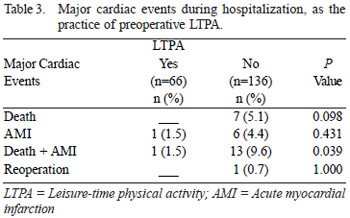 The results of habitual physical activity questionnaire of Baecke and 6MWT demonstrated rates significantly higher among patients active when compared to sedentary ones (Table 4), reinforcing the initial classification of patients. 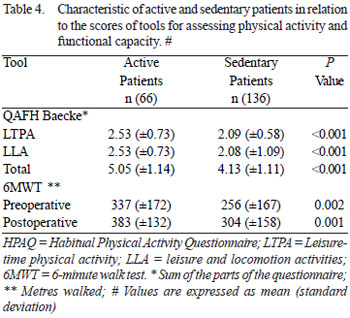 Figure 1 presents results related to the effect of LTPA on early outcome of CABG, as demonstrated by multivariate logistic regression. Patients in the active group showed probability 78% less to develop MCE, while smoking and chronic obstructive pulmonary disease (COPD) increased the probability of outcomes in 2.2 and 3.84, respectively. Patients with higher risk scores presented 5.98 high probability of presenting MCE when compared with low-risk patients. 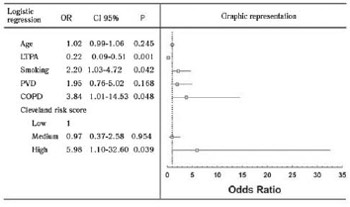 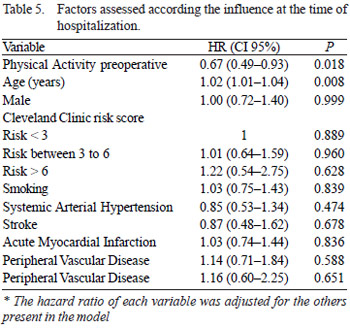 This study showed that physical activity during leisure time preoperatively in patients undergoing CABG, had a beneficial effect on postoperative outcome, with significant reduction in length of hospital stay and incidence of MCE. Patients included in our study did not undergo intensive efforts, or isometric exercises that could compromise their health. The practice of LTPA represented an important protective factor for patients who had undergone physical activity during the period of one year prior to CABG and those who remained active until two weeks before surgery. These patients had 78% less probability to develop MCE during hospital stay, demonstrating the beneficial effect of LTPA associated with MCE in the early postoperative period of CABG.

Arthur et al. [15] observed that an exercise program during the preoperative period can be used with low-risk patients awaiting CABG, especially in public health services. The authors demonstrated that patients who received the training presented shorter hospital stay and shorter periods of stay in intensive care unit compared with patients in the control group. The quality of life of these patients was also improved and was maintained during the first 6 months after surgery. Cook et al. [16] have also demonstrated that an exercise program and guidance on risk factors is beneficial to patients waiting for CABG, and was effective in reducing hospital stay.

Herdy et al. [24] in a controlled clinical trial evaluated the cardiopulmonary rehabilitation composed of muscle and ventilatory exercises, as well as preoperative education for at least 5 days and postoperatively until discharge. As a result, one should be observed a significant reduction in pulmonary complications, a significant difference in the incidence of cardiac arrhythmias (especially atrial fibrillation) as well as improved functional capacity measured on the seventh postoperative day using the 6MWT. The improvement in lung capacity was also observed in a study that selected volunteers, awaiting CABG and/or valve replacement surgery. They were randomly assigned to a domiciliary program of at least two weeks of preoperative training of inspiratory muscles, using a device with a load of 40% of MIP. The other 15 patients did not undergo respiratory muscle training. Forced vital capacity and maximal voluntary ventilation was higher in the trained group compared to the control group [25].

Despite the positive effect observed in the practice of LTPA preoperatively observed in our study, there is still a gap to be explored in randomized studies, on which the assessment of functional capacity is measured using a maximal cardiopulmonary exercise testing with analysis of exhaled gases in different exercise programs performed in the preoperative period of CABG.

This study showed that physical activity during leisure time in the preoperative CABG may have a beneficial effect on the prognosis of patients, resulting in decreased incidence of major cardiac events and hospital stay.