Introduction: The relationship between mitral annular calcification (MAC) and the controlling nutritional status (CONUT) score has not been previously studied. In this study, we investigated the relationship between MAC and CONUT score to evaluate the nutritional status of patients with MAC.
Methods: A total of 275 patients, including 150 patients with MAC and 125 patients without MAC, who presented to a cardiology outpatient clinic were enrolled in the study.
Results: There was no difference in the CONUT score between the two groups. Correlation analysis indicated that CONUT score was positively correlated with left atrial (LA) diameter (r=0.190, P=0.020) and interventricular septum thickness (r=0.179, P=0.028) in the MAC+ group. In multivariate regression analysis, only LA diameter (odds ratio 95% confidence interval = 1,054-1,189, P=0.0001) was independently associated with MAC.
Conclusion: The present study investigated the relationship between CONUT score and MAC for the first time in the literature. We demonstrated that CONUT score was not significantly higher in patients with MAC without chronic diseases. However, CONUT score was correlated with LA diameter in patients with MAC. We therefore conclude that, for patients admitted with MAC and high LA diameter, CONUT is a valuable nutritional and inflammatory status index.

Mitral annular calcification (MAC) is a degenerative process caused by lipid and calcium storage in the mitral valve apparatus, which can affect mitral valve functions[1]. MAC is associated with atherosclerotic processes in different regions such as carotid artery disease, coronary artery disease, and aortic atheroma[2]. Several studies have shown a relationship between MAC and mean platelet volume (MPV)[3], red cell distribution width (RDW)[4], platelet/lymphocyte ratio[5], monocyte/high-density lipoprotein (HDL) ratio[6], and neutrophil/lymphocyte[7] ratio (NLR), all of which may be related to cardiovascular risk factors. The nutritional status of patients with MAC has not been adequately studied to date. However, Tanik and Pamukcu showed that the prognostic nutritional index was lower in patients with MAC[8]. The controlling nutritional status (CONUT) score is a simple and useful tool to identify patients at risk of developing nutrition-related complications[9]. The CONUT score uses two biochemical parameters (serum albumin and cholesterol levels) and one immune parameter (total lymphocyte count) to assess nutritional status and inflammation. Soft-tissue calcification like MAC occurs with chronic inflammation. The CONUT score has been shown to predict short-term and long-term prognoses in patients with heart failure[10]. In this study, we investigated the relationship between MAC and the CONUT score to evaluate the nutritional status of patients with MAC.

The study was performed in compliance with the principles outlined in the Declaration of Helsinki and was approved by the Pamukkale University’s local ethics committee (approval number 29683). All patients who were admitted to the Pamukkale University’s Department of Cardiology outpatient clinic between January and December 2019 were evaluated retrospectively. The study included 150 patients with MAC (MAC+) and a control group of 125 patients without MAC (MAC-). The composition of groups was similar in terms of age and sex. Exclusion criteria were diabetes mellitus, hypertension, chronic renal or liver disease, moderate to severe mitral stenosis, aortic stenosis and aortic regurgitation, malignancy, history of systemic or pulmonary embolism, chronic hematological diseases, acute or chronic inflammatory disease, autoimmune disease, current use of anticoagulants, presence of a prosthetic valve, permanent and paroxysmal atrial fibrillation, congestive heart failure, or history of immunosuppressant usage. Glucose, creatinine, all lipid parameters, and complete blood count values were obtained from hospital records.

Calculation of the CONUT Score

The IBM Corp. Released 2015, IBM SPSS Statistics for Windows, version 23.0, Armonk, NY: IBM Group software was used for statistical analysis. Continuous variables are shown as mean ± standard deviation and categorical variables are given as number and percentage. Kolmogorov-Smirnov test was used to examine the normal distribution of data. Student’s t-test or Mann-Whitney U test was used for numerical variables and Chi-square test was used for analysis of categorical variables. The relationships between normally and non-normally distributed continuous variables were analyzed by using Pearson’s or Spearman’s correlation analysis. The independent predictors for the presence of MAC were analyzed by using logistic regression analysis. Possible confounding factors were tested with a univariable regression analysis, and those with P<0.1 were tested with a multivariable logistic regression analysis. A two-sided P-value of < 0.05 was considered statistically significant. 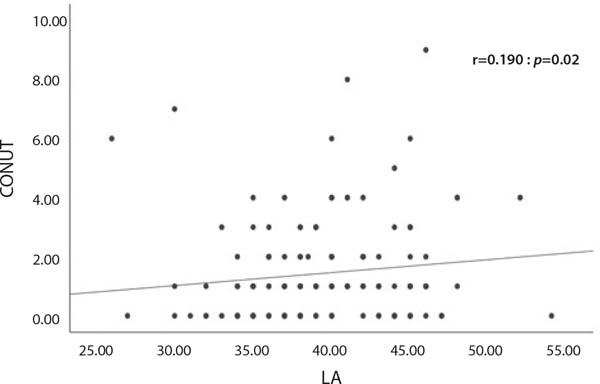 In the present study, we used the CONUT score to investigate the nutritional status in patients with MAC. CONUT score was not statistically higher in the MAC+ group compared to the MAC- group. However, a significant positive correlation was found between CONUT score and LA diameter, which is associated with chronic conditions and poor outcomes in cardiovascular disease, in the MAC+ patients[11]. In other words, LA diameter was independently associated with poor nutritional status in MAC+ patients, even without chronic disease.

The current study has certain limitations. First, it does not provide prognostic data due to its cross-sectional design. Second, it was a single-center study that included a relatively small number of patients. Third, a number of relevant parameters, including LA volume index and body mass index, were not available for all patients. Therefore, other nutritional indices such as the geriatric nutritional index could not be evaluated.

In conclusion, the present study investigated the relationship between CONUT score and MAC for the first time in the literature. We demonstrated that CONUT score was not significantly higher in patients with MAC when compared with control patients without MAC. However, the CONUT score was correlated with LA diameter in patients with MAC. In MAC+ patients, greater LA diameter was associated with poor nutritional process and inflammation. We therefore conclude that, for patients admitted with MAC and increased LA diameter, CONUT is a valuable nutritional status index. Prospective studies with larger patient populations could confirm the relationship between MAC and CONUT score and evaluate prognostic implications.

IB = Substantial contributions to theconception or design of the work, or the acquisition, analysis, orinterpretation of data for the work; final approval of the versionto be published

IDK = Final approval of the version to bepublished

DD = Final approval of the version to bepublished