Objective: To evaluate the relationship between neutrophil to lymphocyte ratio (NLR) and platelet to lymphocyte ratio (PLR) with in-hospital mortality in type A acute aortic dissection (AAD).
Methods: A total of 96 patients who presented to the emergency department between January 2013 and June 2018 with a diagnosis of type A AAD were enrolled in this study. White blood cell count subtypes such as NLR and PLR were calculated at the time of admission. The end point was in-hospital mortality.
Results: Of the 96 type A AAD patients included in this analysis, 17 patients (17.7%) died during hospitalization. NLR and PLR were significantly elevated in patients with type A AAD (P<0.001 and <0.001, respectively). Based on the receiver operating characteristic curve, the best NLR cut-off value to predict in-hospital mortality was 9.74, with 70.6% sensitivity and 76.8% specificity, whereas the best PLR cut-off value was 195.8, with 76.5% sensitivity and 78.1% specificity.
Conclusion: Admission NLR and PLR levels were important risk factors and independently associated with in-hospital mortality of type A AAD patients.

Type A acute aortic dissection (AAD) is a destructive cardiovascular condition with a mortality rate of 1-2% per hour, after the onset of symptoms[1]. Determination of risk factors for prognosis is of great value for risk classification in patients with type A AAD. In recent years, chest pain, hypotension, and inflammatory biomarkers, such as C-reactive protein (CRP), have been shown to be related with the prognosis in patients with AAD[2,3].

This retrospective study was approved by the local ethical committee and the tenets of the Declaration of Helsinki were followed. After the approval, we carried out a retrospective hospital record review of the data of patients with suspected Stanford type A AAD in our emergency department between January 2013 and June 2018 and these were enrolled in this study. The diagnosis of AAD was confirmed by aorta angiography with multidetector computed tomography (CT) scanning. Inclusion criteria of this study were: (1) type A AAD within 24 hours after symptom onset and (2) age over 18 years. Patients with missing clinical, laboratory, or radiographic data and those who had chronic liver and renal disease, hematological diseases, inflammatory or autoimmune diseases, malignant tumor, and prior history of aortic dissection were excluded. Clinical baseline characteristics, results of CT scan, hematologic laboratory data, and all clinical outcomes were obtained from a review of the each patient’s chart in the database of our hospital. The reason and strategy of surgical techniques were determined by the surgeons in the department of cardiovascular surgery in our hospital.

The laboratory results were evaluated using the first venous blood samples taken on admission to the emergency department. Samples were analyzed within one hour of collection using an automated blood cell counter (Coulter® LH 780 Hematologic Analyzer, Beckman Coulter Inc. Brea, USA). Reference values were 2.1-6.1×103/mm3 for neutrophils, 1.3-3.5×103/mm3 for lymphocytes, 156- 373×103/mm3 for platelets. The NLR was calculated as the ratio of neutrophil count to lymphocyte count, and the PLR was calculated as the ratio of platelet count to lymphocyte count. The study end point was identified as all-cause mortality during hospitalization.

We performed all statistical analyses with the Statistical Package for the Social Sciences (SPSS) software (SPSS, Inc., Chicago, Illinois, USA), version 18.0. Results are presented as mean±standard deviation (SD) with interquartile range unless otherwise stated. Variations between interventions are reported as mean differences with 95% confidence intervals (95% CI). Baseline characteristics were compared between survivor and non-survivor patients using unpaired Student’s t-tests, Wilcoxon-Mann-Whitney tests for continuous data, and Chi-square tests for categorical data. Categorical variables were defined as a percentage. Receiver operating characteristic (ROC) analysis was performed to determine the cut-off value for NLR and PLR in predicting in-hospital mortality with high sensitivity and specificity. To define the independent predictors associated with in-hospital mortality in AAD patients, univariate analysis and multiple logistic regression analysis were used to identify the factors related to in-hospital mortality. 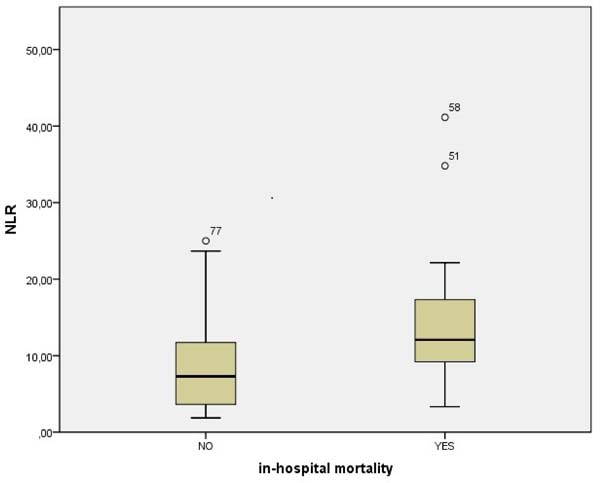 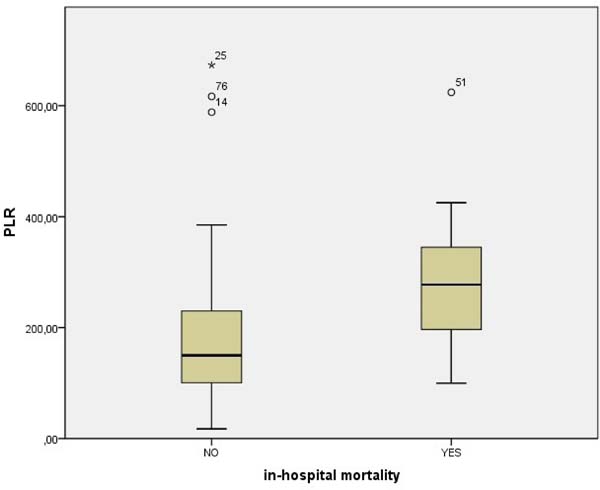 Fig. 2 - Comparison of platelet to lymphocyte ratio (PLR) between survivor and non-survivor patients admitted with type A acute aortic dissection. 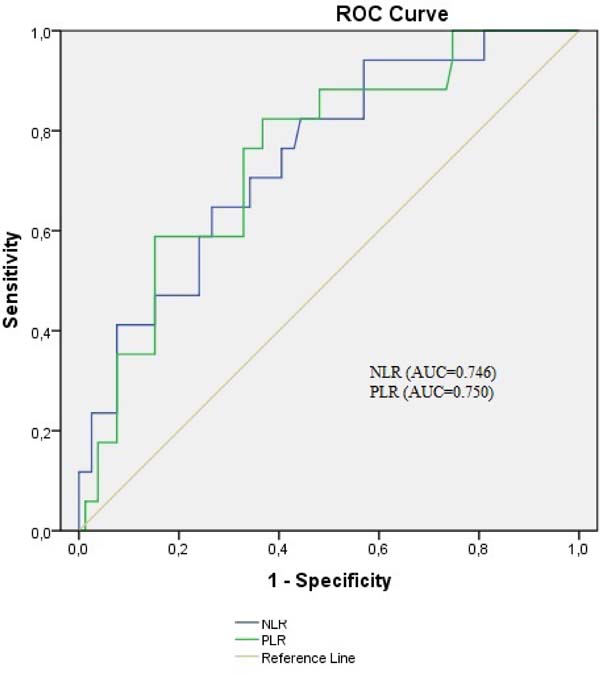 WBC subtypes, such as NLR and PLR, are simple, widely applied, and inexpensive prognostic markers of proinflammatory state and they appear to be associated with bad clinical outcomes in various cardiovascular diseases[6,7]. Many studies also recommend NLR and PLR as useful predictors of outcomes in percutaneous coronary intervention, coronary artery bypass grafting, and stent restenosis[7,9]. In the present study, we showed that these ratios can be predictive parameters to determine the in-hospital mortality of type A AAD.

In AAD, which is a separation of the aortic wall layers, the pathogenic, genetic, environmental, and injury factors play an important role[11]. Previous studies have demonstrated that inflammation plays an important role in AAD[1]. Recent studies revealed that high PLR levels were associated with inflammation and its severity[12,13]. In some studies, PLR has been defined as a significant indicator of in-hospital mortality for infective endocarditis, tumors, and cardiovascular diseases[14,16]. Our findings revealed that at a cut-off value >195.8, PLR had an AUC of 0.750, 76.5% sensitivity, and 78.1% specificity in predicting type A AAD related in-hospital mortality.

Our study had some limitations as follows: (1) this was a single-center study that included a relatively small number of patients who were retrospectively enrolled from our database; (2) we only measured NLR and PLR on admission, so series of NLR and PLR measurements at different time points could also predict type A AAD in-hospital mortality; (3) further research is needed to understand the role of NLR and PLR in the outcome of AAD, alone or in combination with other inflammatory biomarkers.

Admission NLR and PLR levels were important risk factors and independently associated with in-hospital mortality of type A AAD patients.

CB Substantial contributions to the conception or design of the study; or the acquisition, analysis, or interpretation of data for the study; final approval of the version to be published

FS Final approval of the version to be published