Introduction: This study aimed to evaluate the feasibility and efficacy of robotically assisted, minimally invasive mitral valve surgery combined with left atrial reduction for mitral valve surgery and elimination of atrial fibrillation (AF).
Methods: Eleven patients with severe mitral regurgitation, AF, and left atrial enlargement who underwent robotic, minimally invasive surgery between May 2013 and March 2018 were evaluated retrospectively. The da Vinci robotic system was used in all procedures. The patients’ demographic data, electrocardiography (ECG) findings, and pre- and postoperative transthoracic echocardiography findings were analyzed. During follow up ECG was performed at postoperative 3, 6, and 12 months additionally at the 3rd month trans thoracic echocardiography was performed and functional capacity was also evaluated for all patients.
Results: All patients underwent robotic-assisted mitral valve surgery with radiofrequency ablation and left atrial reduction. Mean age was 45.76±16.61 years; 7 patients were male and 4 were female. Preoperatively, mean left atrial volume index (LAVI) was 69.55±4.87 mL/m2, ejection fraction (EF) was 54.62±8.27%, and pulmonary artery pressure (PAP) was 45.75±9.42 mmHg. Postoperatively, in hospital evaluation LAVI decreased to 48.01±4.91 mL/m2 (P=0.008), EF to 50.63±10.13% (P>0.05), and PAP to 39.02±3.11 mmHg (P=0.012). AF was eliminated in 8 (72%) of the 11 patients at the 1st postoperative month. There were significant improvements in functional capacity and no mortality during follow-up.
Conclusion: Left atrial reduction and radiofrequency ablation concomitant with robotically assisted minimally invasive mitral valve surgery can be performed safely and effectively to eliminate AF and prevent recurrence.

Although robotic mitral valve surgery is well documented, there are no reports in the literature concerning the combination of mitral valve surgery, radiofrequency (RF) ablation, and left atrial reduction. Therefore, the aim of this study was to provide further validation of the efficacy and feasibility of robotic-assisted surgical techniques for this combined procedure.

A left radial artery catheter was placed, and general anesthesia was induced, followed by placement of a single-lumen endotracheal tube and transesophageal echocardiography (TEE) probe. After surgical cannulation of the femoral artery and vein, the jugular and femoral vein catheters were connected to each other, then both arterial and venous cannulas were connected to the cardiopulmonary circuit. The da Vinci robotic system was docked, and the robotic arms were deployed to the designated intrathoracic space (Figure 1). Cardiopulmonary bypass (CPB) was initiated and pericardiotomy was performed, being careful to avoid the phrenic nerve. The pericardium was suspended using retraction sutures. The anterolateral surface of the ascending aorta was sutured with 5-0 PTFE suture for cardioplegia cannula fixation. This cannula can also be used as an aortic root vent. The ascending aorta was occluded using a Chitwood transthoracic aortic cross-clamp (Aesculap Inc. Corporate Parkway Center Valley, PA, USA) and antegrade crystalloid Brethschneider cold cardioplegia was used to arrest the heart. 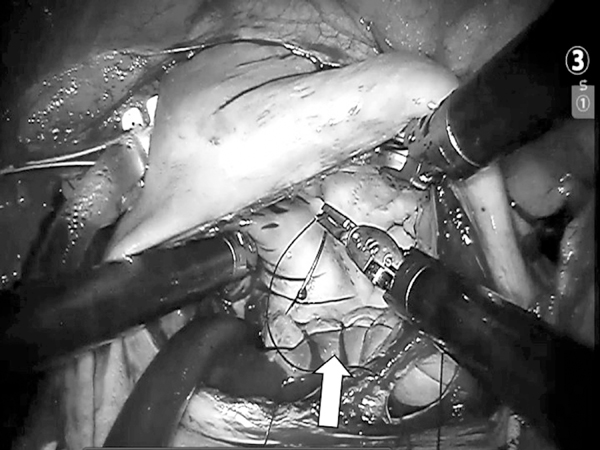 After hemodynamic stabilization, mitral valve functions were evaluated by TEE and CPB was terminated. Robotic arms were removed, and chest drains were placed in the pericardium and right pleura through port incisions. Heparin was reversed and all incisions were closed.

Every patient was followed up for 3 months exactly because patients were started on class I or III antiarrhythmic drugs and warfarin before hospital discharge. The rhythm was monitored continuously until the discharge, for all patients. If they were in sinus rhythm at the 3rd month, the antiarrhythmic drugs were discontinued. Furthermore, if sinus rhythm was obtained and mitral repair was durable concomitantly by means of echocardiography, anticoagulation was stopped. Follow up conducted by obtaining electrocardiograms studies for all patients at 3, 6 and 12 months and trans thoracic echocardiography studies and functional capacity analysis was performed for all patients at the 3rd month (Tables 3 and 4).

Mitral valve reconstruction, radiofrequency ablation, and left atrial reduction procedures were performed concomitantly. Left atrial appendage closure was performed in all cases as part of the left atrial reduction procedure. There was no operative or hospital mortality. Bleeding, re-operation, stroke, renal failure or infection did not occur during in hospital and follow up period. Mean CPB time was 147.88±19.12 minutes and mean XC time was 105.75±20.03 minutes. Sinus rhythm was achieved in 8 of 11 patients (72.7%) at postoperative week 1 (Table 5). The mean follow-up time was 16.30±5.42 months, during which there was no mortality. However, the proportion of patients maintaining sinus rhythm decreased during follow-up. One patient experienced AF recurrence despite antiarrhythmic medication. Postoperative mean LAVI was significantly lower compared to the preoperative value (48.01±4.91 mL/m2vs. 69.55±4.87 mL/m2, P=0.008) (Table 3). Pre- and postoperative mean New York Heart Association (NYHA) classification indicated significant functional improvement postoperatively (3.1±0.6 vs. 1.8±0.6; P<0.001) (Table 4).

This study involves the analyses of mitral valve procedures combined with RF ablation and LA reduction procedures via robotic surgery. Mitral valve surgery via robotic-assisted systems enables the surgeon to explore the mitral valve and components in detail without an open procedure. Robotic systems provide three-dimensional visualization and utilize long-shafted endoscopic instruments with seven degrees of freedom. These features enable minimally invasive mitral valve procedures to be performed as successfully as with conventional sternotomy but with reduced trauma, less need for blood and blood products, and shorter intensive care unit and hospital stays[4-6,9]. As surgeons use robotic surgical platforms for increasingly complex procedures, it is important to collate clinical data to validate the use of these methods for various surgery types and patient groups. Nifong et al.[10] reported successful surgical management of mitral valve repairs with concomitant biatrial cryoablation via robotic, minimally invasive surgery. In the present study, we report the successful surgical management of mitral valve pathologies with concomitant RF ablation and left atrial reduction through robotic, minimally invasive technique. One concern with increasing the complexity of robotic surgeries may be prolonging CPB and XC times and surgery duration. Robotic surgery is associated with longer XC and CPB times compared to conventional approaches[11]. However, it has been reported that the mortality and morbidity rates are similar to the conventional procedures[12]. In a 2013 systematic review of robotic mitral surgery by Seco et al.[13], reported CPB times ranged from 106±22 to188.5±53.8 minutes and mean XC times ranged from 79±16 to 140±40 minutes. In the single study that reported CPB and XC times separately for robotic mitral valve surgery with and without cryoablation, CPB times were 188.5±53.8 and 153.2±37.7 minutes and XC times were 130.6±28.4 and 116.6±31.6 minutes respectively with and without cryoablation[10]. The robotic mitral valve surgery we performed consisted of mitral valve repair or replacement, left atrial appendage closure, RF ablation, and left atrial reduction. Nevertheless, our CPB and XC times were 147.88±19.12 and 105.75±20.03 minutes, respectively. These times are well within the ranges reported in the literature for robotic mitral valve surgery and even below those reported for procedures including ablation. This clearly demonstrates that prolonged CPB and XC times is not an issue with concomitant ablation and left atrial reduction procedures in robotic mitral valve surgery. In experienced centers with refined techniques and skilled robotic teams, operative times should be comparable to those achieved with conventional methods. The determination of the interrelationship of pressure, volume, and wall stress of the cardiac chambers is an important prerequisite for a fundamental understanding of cardiac mechanics. A mathematical model of these mechanics is based on the Law of Laplace (P=2HT/r)[14]. In this formula, P is pressure, H is wall stress, T is wall thickness, and r is the radius of the chamber. This equation shows that for a given pressure, an increase in radius requires increased wall thickness to maintain a constant wall stress. Furthermore, increased pressure requires greater thickness to maintain a constant wall stress. Consequently, increased left atrial diameter would cause increased wall thickness. The primary mechanism through which wall thickness is increased is fibrous tissue accumulation[15], and left atrial fibrosis plays a major role in the development of atrial fibrillation[16]. Based on these data, the surgical strategy used in our practice for patients with mitral valve dysfunction, AF, and LAE is to restore normal mitral function via replacement or repair and to perform RF ablation and LA reduction to restore and maintain normal mechanical functions and rhythm. Consequently we preferred only left atrial ablation procedure because no significant difference was mentioned between biatrial and left atrial ablation results in previous studies[17,18]. Duration of mitral valve disease is the main factor for LAE and progression of AF, which may be complicated with cerebral and peripheral thromboembolic events. There is no consensus on performing left atrial reduction; however, an association between left atrial size and failure of the maze procedure has been reported previously[19]. In another study, AF was eliminated after maze procedure in 100% of patients with left atrial size <4.5 cm and 0% of patients with left atrial size >8.5 cm[20]. In the present study, mean LAVI was 69.55±4.87 mL/m2 and sinus rhythm was achieved in 8 patients (72.7%). We believe that reducing left atrial size is an important factor in the elimination of AF and can facilitate better ventricle function. Our results confirm that significant reductions in left atrial volume can be achieved through a robotic surgical platform.

This study is limited by the retrospective, single-center nature of the data and the small number of patients. Another limitation was that the study did not directly compare conventional and robotic mitral valve surgeries combined with left atrial reduction and RF. Nevertheless, our initial results are a novel contribution to the literature in terms of validating robotic-assisted surgical techniques.

UA Conception and study design; analysis and/or data interpretation; statistical analysis; final approval of the version to be published

OS Conception and study design; analysis and/or data interpretation; statistical analysis; final approval of the version to be published

EK Conception and study design; analysis and/or data interpretation; statistical analysis; final approval of the version to be published

ZK Conception and study design; analysis and/or data interpretation; statistical analysis; final approval of the version to be published

BO Execution of operations and/or trials; manuscript writing or critical review of its content; final approval of the version to be published