The development of postoperative acute kidney injury (AKI) is a recognized complication in patients undergoing cardiac surgery[1]. It has a dramatic impact on operative mortality, intensive care unit (ICU) resources, and hospital length of stay. Approximately 20% of cardiac surgical patients will develop postoperative AKI[2]. The risk of AKI increases 4.8 fold for each 88 µmol/L increment in serum creatinine (SCr) levels[3-5]. AKI severe enough to require renal replacement therapy (RRT) is infrequent, but the operative mortality in these patients ranges from 40% to 80%[6]. This emphasizes the crucial importance of taking any step possible to preserve renal function in the perioperative period, especially in patients at increased risk[3,7-9].

The pathogenesis of AKI after cardiac surgery is not completely understood. It is very unlikely that a single etiologic factor will cause postoperative renal injury[3]. AKI is the consequence of multiple kidney aggressions occurring during the preoperative, intraoperative, and postoperative periods[3].

Coronary artery disease (CAD) is one of the main causes of death in developed countries and coronary artery bypass graft (CABG) is the most common cardiovascular procedure performed worldwide[10,11]. Every interventional approach has a different impact on the onset of renal injury, but a greater risk of renal dysfunction is inevitable after cardiopulmonary bypass (CPB)[12]. Unlike valve surgery, which is an independent risk factor for postoperative AKI, coronary surgery is not directly related to renal dysfunction[13].

Despite the fact that multiple AKI risk factors have been already identified, postoperative AKI still remains as the strongest risk factor for death after cardiac surgery[1]. Various predictive models have been developed to predict AKI, such as the acute kidney injury following cardiac surgery (AKICS) score, Cleveland Clinic score, Mehta score, and simplified renal index (SRI) score[14]. Nevertheless, their predictive value combining discrimination and calibration were barely satisfactory and not convincible[14]. Therefore, it is crucial to recognize these risk factors promptly and to develop a model to predict AKI's appearance, which allows appropriate measures to be taken to reduce its incidence.

This study aimed to identify the risk factors associated with AKI after isolated revascularization surgery with CPB and to make an accurate and predictive model for AKI after cardiac surgery. Such predictive model would be highly valuable for clinical practices because AKI is a well-established predictor of all-cause mortality in patients receiving CABG.

We performed an observational retrospective study of 435 consecutive patients undergoing CABG under CPB, from January 2012 to December 2016, at the Clinic University Hospital of Valladolid. All patients undergoing elective or urgent isolated primary CABG surgery under CPB were included. Those with prior renal insufficiency, off-pump surgery, prior cardiac intervention, or CABG combined with heart valve replacement or other surgical procedures were excluded.

The primary outcome variable was the development of AKI after cardiac procedure. AKI was defined according to the risk, injury, failure, loss, and end-stage (RIFLE) criteria[15]. The baseline SCr level was determined using the most recent level measured (mean of 1.0 ± 1.0 days) before surgery and the estimated glomerular filtration rate (eGFR) derived from the Cockcroft-Gault formula.

Secondary outcomes were need of RRT, ICU length of stay, and 30-day mortality.

All data were obtained from electronic medical records and the cardiovascular surgery database at the medical center.

Associations between AKI and other variables were identified using χ2 or Fisher's exact test for qualitative analysis; Student's t-test or Mann-Whitney U test was used for quantitative analysis, according to normality criteria.

All variables were included in multivariate logistic regression analyses; bootstrapping was performed to derive 95% confidence intervals (CI) for estimates. Multicollinearity was assessed using variance inflation factor. Logistic regression was repeated with variables that had been significant in previous analysis. The model was further developed and validated using the bootstrap approach, which is the method most widely advocated by experts for model development and internal validation[16].

Accuracy was measured by the area under the receiver operating characteristic (ROC) curve analysis.

Odds ratio (OR) with 95% CI and P-value were reported. P-values <0.05 were considered statistically significant.

Table 1 - Preoperative, intraoperative, and postoperative variables according to the presence of acute kidney injury (AKI).

Table 1 - Preoperative, intraoperative, and postoperative variables according to the presence of acute kidney injury (AKI).

After incorporating the variables into the multiple logistic regression analysis with stepwise selection, age, hypertension, EF <30%, eGFR, and EuroSCORE II were independently associated with risk of postoperative AKI. Not taking calcium-channel blockers (CCB) medication was also a risk factor for the development of postoperative AKI (OR, 4.892; 95%CI, 1.496-16.025; P=0.022). These variables were then analyzed using bootstrap approach for the internal model validation for binary clinical risk prediction models (Table 2). 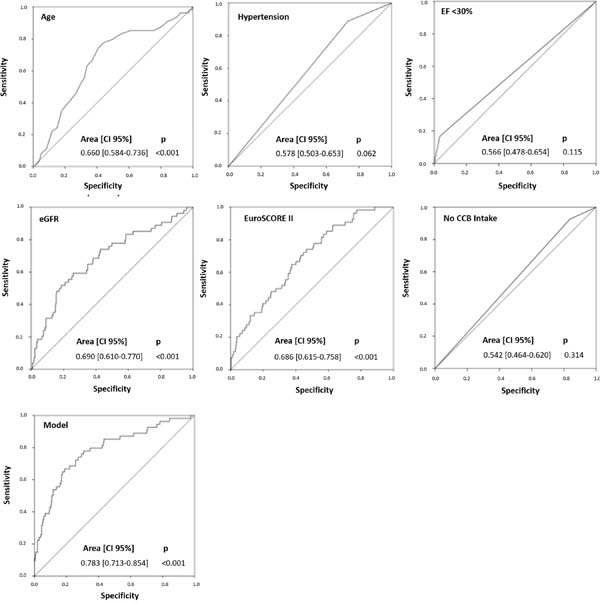 AKI is a well-known major complication associated with cardiac surgery and its incidence ranges from 8.9% to 42.5%, depending on the definition[17-19]. The incidence of AKI following CABG in our population is fairly consistent with the incidence reported in the published data, which was described from 12% to 48.5%[19-21], with an associated mortality of 12.6%. Furthermore, several studies have demonstrated that 3.8%-7% of patients would require RRT[22]. Our reported mortality was slightly higher (18.5%) and may be related to the older age of our patient population, compared with reported series of younger patients with postoperative AKI[20].

Patients who developed AKI were older and had higher BMI, hypertension, severe left ventricular dysfunction, and worse preoperative renal function. Our findings aligned with the current data which report the etiology of AKICS as multifactorial[24-26], correlating with advanced age, preexisting kidney disease, and left ventricular impairment, which are some of the important predictors of AKI development[20].

Another factor that influences the risk of AKI is the time elapsed between cardiac catheterization and CABG; in case of urgent surgeries, it is not possible to delay the surgery after the angiography. Recent reports focused on the time interval between coronary angiography and cardiac operation as the main determinant of postoperative renal failure[29]. The notion that a 'double hit' on renal function in close succession may increase the risk of AKI provides the basis for the recommendation to wait before exposing the kidneys to a second insult[28]. However, there is no consensus for a specific time delay between cardiac catheterization and CABG operation.

Identification and categorization of these high-risk patients allow for optimal decision-making for earlier interventions and better management strategies.

One of our main findings was that the use of CCB drugs has a possible nephroprotective effect in patients undergoing myocardial revascularization with extracorporeal circulation, similarly to the findings reported by Passaroni et al.[31]. They found that patients who did not receive CCB medications presented a higher percentage of AKI development after CABG with CPB. The nephroprotection effect is due to inhibition of glomerular vasoconstriction, producing vasodilatation of the arterioles and increasing the natriuretic effect[31].

Preoperative, intraoperative, and postoperative periods are all important for the development of AKI, but the use of traditional markers such as SCr levels to diagnose AKI can limit and even delay its diagnosis[32]; there could already exist an acute renal lesion with a normal SCr value. This occurs in addition to the hemodilution in the first postoperative hours after cardiac surgery. Thus, there would not be an increase in SCr levels and the diagnosis of AKI could be delayed[33].

To prevent CABG-related AKI, predictive risk scores based on preoperative variables have been developed, such as the Cleveland Clinic score, Mehta score, SRI score, AKICS score, and age, creatinine, EF (ACEF) score[32]. However, there is still no consensus to recommend the use of a specific score to predict AKI before CABG[32].

Moreover, we found that the combination of factors such as hypertension, EF <30, eGFR, EuroSCORE II, and lack of CCB intake could bring us a model with a better ROC curve (0.783±0.036; 95%CI, 0.713-0.854; P<0.001). This scoring system may be an applicable model to predict postoperative AKI development because it uses clinical data, which can be readily and rapidly obtained, making it very appropriate for elective or urgent surgery[23]. More effort is required to develop and validate different prediction models to identify postoperative AKI in an easy-to-use, accurate pattern.