Different processes have been proposed for SVG disease (SVGD), including thrombosis, intimal hyperplasia, and atherosclerosis. The contribution of these processes may differ among patients. Therefore, many studies have been conducted to identify risk indicators during SVGD. Platelets are known to play an important role in the pathophysiology of coronary artery disease and SVGD. The main effect of platelets known to have activity in atherogenesis, which begins with the endothelial injury, is atherothrombosis, a dangerous complication in the advanced stage of atherosclerosis[2]. Mean platelet volume (MPV) is an important indicator of platelet activation. Platelet distribution width (PDW) and platelet count have also been associated with SVGD[2-4].

We aimed to determine whether MPV and PDW values and platelet count could be used as predictive parameters for early death after CABG surgery and graft occlusion during SVGD.

This retrospective study included 128 patients (77 males, 51 females) who underwent emergency or elective coronary angiography after CABG surgery, between 2010 and 2017, and who died during the early stages (deﬁned as in-hospital or 60-day mortality). All operations were performed by a single surgical team. Patients were divided into three groups according to SVG patency and early death: Group I, early death (n=30, 19 males, 11 females, mean age 62.3±9.6); Group II, nonstenotic group (n=49, 28 males, 21 females, mean age 59.9±10.6); and Group III, stenotic group (SVGD) (n=49, 30 males, 19 females, mean age 61.7±11.7). Coronary angiographies of patients were assessed by two independent examiners. Stenosis of 50% or more in SVG was considered hemodynamically significant. Patients underwent CABG operation included at least the use of one SVG. The left internal mammary artery (LIMA) was used in all patients, except eight.

Indications for coronary angiography were as follows: recurrent postoperative stable angina pectoris, unstable angina pectoris, myocardial infarction, and preoperative evaluation for non-cardiac surgeries. Before the angiography procedure, medical history and risk factors for coronary heart disease of all patients were evaluated. Patients with SVG and problems in the native artery anastomosis path, those with severe cardiac valve disease and other diseases with cardiac manifestations (e.g., ventricular septal rupture and dissection), patients with renal and hepatic dysfunction, patients with acute and chronic infections, and patients with bone marrow problems were excluded from the study. Pre and postoperative MPV and PDW values and platelet counts were obtained from hospital records and compared among all groups. Patients included in the study were also evaluated with regards to risk factors, such as age, gender, cigarette smoking, diabetes mellitus, hypertension, hyperlipidemia, drug use, ejection fraction (EF), creatinine clearance, and survival after surgery.

An approval of the local Ethics Committee was obtained for this study. A written informed consent was obtained from each patient. The study was conducted in accordance with the principles of the Declaration of Helsinki. Demographic information, postoperative data, and operative details were retrospectively collected from medical records and the Hospital Electronic Record System.

Statistical analysis was performed using SPSS package (version 20.0; SPSS for Windows, Chicago, IL, USA). Descriptive statistics were reported, including mean, standard deviation (SD), median, interquartile range, and percentage. The t-test was used in comparisons of the deceased and surviving patients; it was also used in comparisons of patient groups with and without SVGD. Receiver operating characteristic (ROC) curves were analyzed to assess the optimal cut-off values of influence factors. Sensitivity and specificity were calculated for the chosen cut-off values. P<0.05 was considered statistically significant.

A total of 128 patients were evaluated in this study; 77 (60.2%) males and 51 (39.8%) females. Demographic characteristics of these patients and laboratory results are shown in Table 1. Low EF value and cigarette smoking in the stenotic (SVGD) group were found to be statistically significant (0.043 and 0.016, respectively; P<0.05).

Table 1 - Baseline clinical characteristics of patients with or without saphenous vein graft disease.

Table 1 - Baseline clinical characteristics of patients with or without saphenous vein graft disease.

Table 2 - Comparison of patients with or without saphenous vein graft disease. 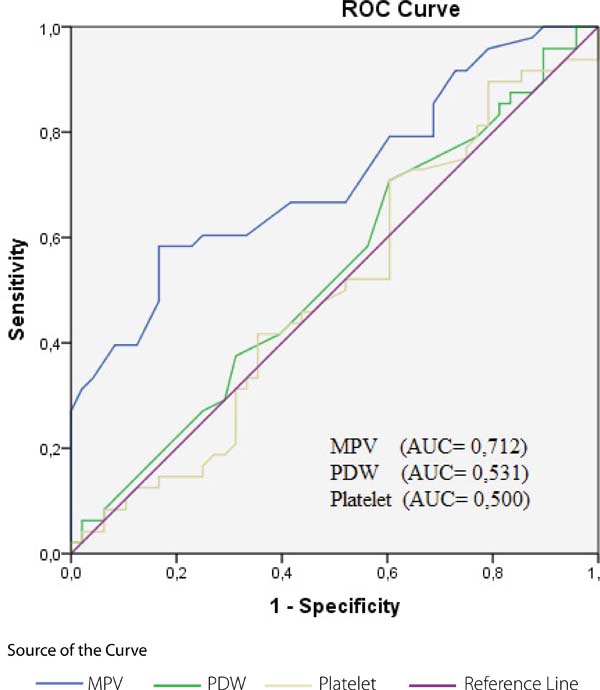 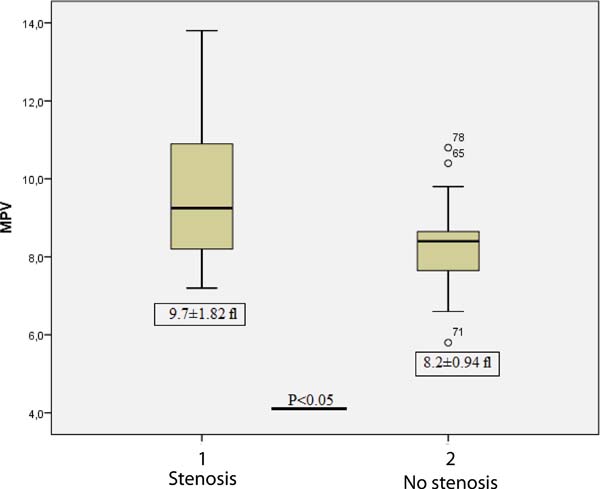 A comparison was made between patients who died at an early stage and surviving patients regarding MPV-d, PDW-d, and platelet count-d values. MPV-d values in the early death group were found to be higher than in surviving patients (9.4±1.9 fl and 8.0±1.0 fl, respectively; P<0.05). There was no statistically significant difference with regards to PDW-d and platelet count-d values (P>0.05) (Table 4). ROC curves for MPV-d, PDW-d, and platelet count-d in the early death group are shown in Figure 3. An MPV value higher than 7.9 fl had 80% sensitivity and 68% specificity.

Table 4 - Comparison of MPV, PDW, and platelet count of deceased and surviving patients. 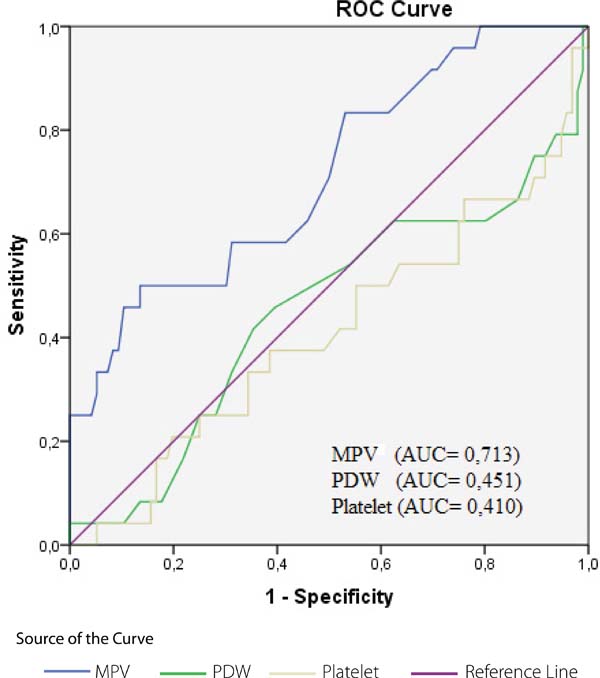 CABG surgery has been accepted as one of the most effective treatment modalities for coronary artery disease. However, long-term outcomes are limited to SVGD[5]. Several risk factors, such as hypertension, diabetes mellitus, cigarette smoking, hyperlipidemia, native vessel diameter, age of the graft, severity of bypassed proximal vessel stenosis, plasma lipoprotein (a), homocysteine, and fibrinogen levels, have been identified for SVGD. In addition, harvesting of venous grafts has been found to be associated with endothelial injury during or after surgery, which may also contribute to SVGD[6,7]. Unlike with arterial grafts, venous grafts are more sensitive to intimal hyperplasia, atherosclerosis, progressive stenosis, and occlusion. All stages of the pathological process are closely related to platelet and platelet functions. Although the role of platelets in the vein graft disease has been evaluated, their relationship has not yet been classified[8].

Steele et al.[8] demonstrated the relationship between occlusion of the saphenous vein graft and platelet viability. Similarly, Latour et al.[9] found platelet regeneration time reduced in patients with saphenous bypass graft. Enzymatic and metabolic activity of the platelets was reported to increase with an augmentation in the platelet volume. Vasoactive mediators secreted by the platelets may contribute to inflammation and the process of atherogenesis. Increased risk of acute coronary syndrome in patients with high MPV may be explained by increased platelet activity, inflammation, and platelet aggregation[10]. MPV has been found to be more closely related to platelet function than to platelet count. In addition to the platelet count, several factors were shown to affect platelet function, including platelet size, density, age, and previous hemostatic interactions[11].

The increase in MPV may be due to the depletion of small platelets during ischemia[11]. Hemostatically reactive platelets, with more granular and larger platelets with adhesion receptors resulting in decreased bleeding time, showed an increased activity[12]. As a result, in addition to reflecting platelet count, MPV also demonstrated platelet activity, and it was considered a determining factor in atherosclerotic coronary disease[13]. Many studies have also shown that increased platelet activation and aggregation are closely correlated with cardiovascular complications[3,6,8,9]. Tavil et al.[3] found that MPV values were higher in the stenotic group when they compared patients with SVGD and without SVGD, according to the results of coronary angiography after coronary bypass surgery, and they identified MPV as a possible postoperative indicator of graft success.

In the present study, we found MPV values significantly high during the development of SVGD and in early (premature) death. This finding may be attributed to intimal hyperplasia in patients with SVGD and to the result of atherosclerosis in increased thrombosis, causing megakaryocyte and platelet activities increased in the bone marrow of the ongoing thrombotic event. High platelet volume in patients with SVGD and in those with premature death supports this notion. We could not demonstrate any difference with regards to PDW and platelet count.

Platelet activation and venous graft thrombosis are considered early steps in the stenosis and occlusion process after CABG surgery. Although many studies have shown the efficacy of antiplatelet therapy during postoperative period, there is still no consensus on the dose of this treatment and whether it should be used as a single acetylsalicylic acid (ASA) drug or as combination therapy (ASA + Clopidogrel)[14]. In our study, high MPV values in patients with mortality and stenosis suggest that antiplatelet therapy should be widely used in these patients during postoperative period.

In the present study, the difference in EF between the groups can be associated with SVG occlusion as previously shown[15]. This suggests that poor left ventricular function contributes to SVGD.

The main limitation of this study was its small sample size with a retrospective design. However, the inclusion of patients with premature death after CABG surgery and those with acute coronary syndrome and the presence of diagnostic and postoperative data were the advantages of this study.

The present study revealed a cut-off MPV value for the prediction of SVG patency after CABG surgery. We believe that MPV could be used as a determinant of graft patency and mortality after this surgery. Furthermore, MPV values can be considered when deciding on the intensity of postoperative antiplatelet therapy.

UK Substantial contributions to the conception or design of the study; or the acquisition, analysis, or interpretation of data for the study; final approval of the version to be published

YK Final approval of the version to be published