Surgery for Tetralogy of Fallot in Adults: Early Outcomes

OBJECTIVE: To study the in-hospital outcome of adult patients who had undergone surgical repair for Tetralogy of Fallot.
METHODS: A retrospective descriptive study was conducted at the Punjab Institute of Cardiology searching the hospital records. All those adult patients who had undergone repair for Tetralogy of Fallot from January 2012 to December 2014 were included in the study. All the patients were operated by the same surgical team. Patients who underwent primary repair as well as those with previous palliative procedures were included in the study. Thirty days outcome was studied by recording variables from the database. Data was analysed using Statistical Package for Social Sciences version 16.
RESULTS: A total of 80 patients was included in the study, in which there were 48 (60%) male patients and 32 (40%) female patients. Mean age was 21±0.21 years. Those with previous palliation were 15 (18.75%). The associated problems observed were: atrial septal defect 27 (33.75%), right aortic arch 30 (37.5%), patent ductus arteriosus 6 (7.5%) and double outlet right ventricle 3 (3.75%). In-hospital mortality recorded was 7 (8%). Postoperative complications encountered were low cardiac output syndrome 9 (11.25%), pleural effusion requiring tapping 3 (3.75%), reoperation for bleeding 3 (3.8%), pulmonary regurgitation (moderate to severe) 20 (25%) which occurred in the transannular patch group only and atrial arrhythmia 4 (5%).
CONCLUSION: A large number of adult patients are still operated for tetralogy of Fallot in Pakistan. With increasing experience in the technique the mortality and morbidity is comparable to international literature.

Tetralogy of Fallot (ToF) is the most frequent cyanotic congenital heart disease, constituting 7 to 10% of all the congenital heart diseases[1]. It carries a very high mortality if left untreated. The 10-year survival in patients untreated is 24% only[2]. The basic anatomical defects stems from the anterior and superior deviation of the infundibular septum which results in the four main features of the disease i.e. subvalvar pulmonary stenosis with hypoplasia of pulmonary artery (PA) valve and pulmonary arteries, non-restrictive malalignment sub-arterial ventricular septal defect (VSD), overriding aorta and right ventricular (RV) hypertrophy. Cyanosis is the main physical feature of the disease whose severity is determined by the degree of right ventricular outflow tract (RVOT) obstruction stenosis, which determines the right to left shunt. Associated anomalies are secundum atrial septal defect, right aortic arch (25%), major aortopulmonary collateral arteries (MAPCAS), complete atrioventricular septal defect (AVSD), anomaly of coronary arteries with e.g. anomalous left anterior descending (LAD) from right coronary artery (RCA) crossing the RVOT (5%)[3]. Cardiac magnetic resonance is the gold standard assessment tool based on its superior imaging of the RVOT, pulmonary arteries, aorta, and aortopulmonary collateral arteries, and on its ability to quantify biventricular size and function, pulmonary regurgitation (PR), and myocardial viability[4]. Primary repair is the strategy of choice where possible in the first year of life. Patients with unfavourable anatomy, comorbidities and severe cyanosis undergo a palliative shunt procedure before the definitive corrective surgery later on in life.

The purpose of this report was to know the outcome of corrective surgery for ToF in our setup in terms of short-term mortality and morbidity. To the best of our knowledge, this is the largest report so far about ToF repair in adult patients in Pakistan.

A retrospective descriptive study was designed to study the in-hospital outcome of all the adult patients who had undergone surgical correction for ToF from January 2012 to December 2014. The hospital database of the Punjab Institute of Cardiology was searched for this purpose and patient variables were recorded. Being a retrospective study, individual patient consent was waived by the hospital ethical review committee.

The basic surgical steps were identical in all the patients i.e. use of cardiopulmonary bypass and avoiding ventriculotomy in most patients. Patients who had undergone palliative procedure previously were evaluated for hemodynamic parameters and size of PA. Those without any irreversible pulmonary arterial hypertension and unfavourable pulmonary anatomy were subjected to final corrective procedure. The goal of repair was a complete relief of RVOT and closure of VSD. Patients with only subpulmonic narrowing underwent infundibular resection of the myocardium. Patients with narrowing of the pulmonary valve annulus also underwent pulmonary valvotomy or placement of a transannular patch (TAP). In these cases, a relief of pulmonary obstruction was achieved at the cost of varying degrees of pulmonary insufficiency. 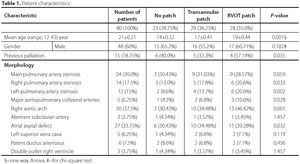 Our study looked into the results of ToF repair in adults only in terms of in-hospital mortality and complications. The survival of patients with ToF repair has greatly improved over the years. During a period from 1955 to 1968, the mortality for primary repair of ToF in the Hospital for Sick Children in Toronto was 35%, but from then onwards, the figure dropped to 12%[5]. The mortality rates of various cardiac centers decreased with more experience in the procedure. Dittrich et al.[6] reported a mortality of 16% in the late 90's. The mortality has greatly improved in most recent reports, largely due to improved technique as well as advances in perioperative care. In the current literature, mortality as low as 0.8% and as high as 9% has been described[7,8]. We report a mortality of 8%, which is still high compared to mortality in paediatric age group. Dittrich et al.[6] argue that this comparatively high mortality in adults may be because of the problems caused by the long-standing cyanosis. These include RV dysfunction in the form of fibrosis, cerebral complications like stroke and abscess formation and poor development of the PA. Our study does not look into the details of preoperative RV function or history of cerebral complications, but we believe that these factors play an important role in the mortality.

Various palliative procedures have been described in the literature. About 18.75% of our patients had undergone palliation procedures previously, which were taken down and a definitive repair performed. Published reports for repairs for ToF previously in Pakistan show a small number of patients being palliated alluding to the fact that the congenital cardiac surgery was in its initial stages in those days in this part of the world.

Most of the advanced centers in the world would perform a primary repair provided there are no contraindications, but there is still no consensus on this subject. Proponents of the primary repair argue that it avoids RV dysfunction and cyanotic spells which can delay developmental milestones. These patients are also prone to cerebral complications like stroke and intracerebral abscess formation. Only 15 patients in our study had undergone a previous palliative procedure and the rest underwent a primary repair in adulthood. Navabi-Shirazi et al.[9] compared results of primary repair and those who had undergone some kind of palliation previously. They concluded that older patients generally do better on 2-stage repair, because of their age, but there is no conclusive data available that demonstrate that twostage repair with improvement of oxygen saturation before correction may improve outcome in this selected group of adult patients. Our study shows no mortality in the group, which had undergone palliation procedures previously.

TAP is needed for a very small-sized pulmonary valve. It carries a higher risk of reoperation, but has no impact on late survival[10]. We applied TAP in a comparatively high number of patients. The reason was we did not accept high degree of right ventricle/left ventricle pressure ratio and the goal was to relieve RVOT as much as possible[11]. Some authors have reported that the use of TAP is lower in grown patients[12]. Apart from a definitive indication based on size, which patient would benefit from a TAP is not fully know. Although this question would be best answered with a prospective randomized study, our experience suggests that the severity of the RVOT, rather than age at repair, is the most important determinant of the frequency of use of TAP.

TAP relieves the RVOT but, at the same time, it can cause varying degree of PR, which is associated with poor short and long-term outcome[13]. PR observed postoperatively in our study was 25%, which is consistent with published reports[14]. A large study by Kirklin et al.[15] suggested that the compensatory responses to RV overload were adequate for a 20-year period, at least with respect to mortality. Our data extend these observations and do not demonstrate any difference in early survival among patients without a patch, and those with a TAP, although other investigators have implicated TAP as a risk factor for reoperation in the long term.

ToF repair in adults carry more postoperative morbidity rate compared to early repair[16]. Complications like low cardiac output syndrome, pericardial effusion, atelectasis, atrial arrhythmia, reoperation for bleeding and varying degree of PR were encountered in our patients. The incidence of postoperative atrial arrhythmias was higher in our adult patients compared to paediatrics as reported in the literature[17]. The incidence of junctional ectopic tachycardia and persistent complete heart block reported in literature is 2% and 1%, respectively[18]. Lungs related complications were encountered in 3.75% of our patients. Kim et al.[19] reported a 5% incidence of pleural effusion that required tapping. The surgical techniques for primary repair to preserve RV function, reduce arrhythmia, and optimize functional status that are still evolving and a definitive consensus is lacking[20].

Our study is not without limitations. A retrospective design and limited follow-up are some of the drawbacks. However, on the other hand, this study gives an insight to the contemporary adult cardiac surgery being practiced in Pakistan. We hope that more centers will publish their results with long-term follow-up. Especially the fate of PR and treatment strategies in our patient population needs to be ascertained. Secondly, with improvement in expertise and perioperative management in Pakistan, more and more surgeons will opt for early primary repair of ToF.