SEM = Standard error of the mean

In the absence of prospective clinical trials and cumulative clinical evidence, based on the literature case reports, the present study was carried out to examine if MB can counteract or prevent protamine cardiovascular effects.

The protocol included five heparinized pig groups: Group Sham - without any drug; Group MB - MB 3 mg/kg infusion; Group P - protamine; Group P/MB - MB after protamine; Group MB/P - MB before protamine. NO plasma levels were measured in each of the experimental groups. The procedures and handling of the animals were reviewed and approved by the Institutional Animal Care review board (Reg 142/2006).

Groups Sham, MB and P showed unchanged parameters. Intravenous P infusion caused MAP drop followed by a recovery trend after 25-30 minutes. The MAP curves of Sham, P and MB were not different and the effect was considered not quite significant (P=0.05) (Figure 1A). 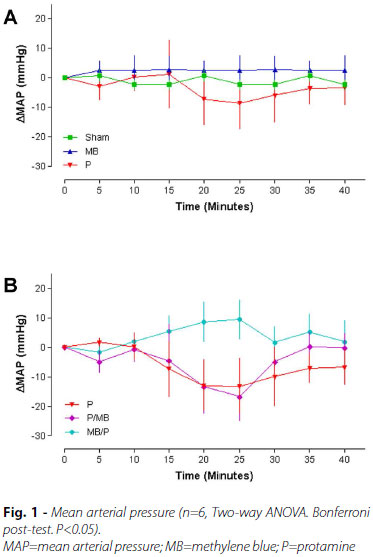 Groups Sham, P and MB showed unchanged parameters (n=6; P>0.05). The statistical significance was borderline and the software pointed out that a larger number of animals would improve the data. In Group P, CO decreased and remained stable until the end of the protamine injection (Figure 2A). 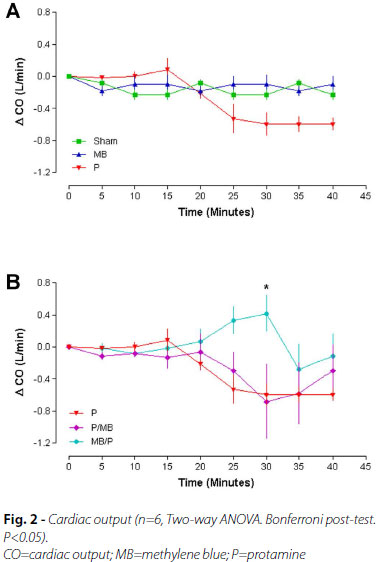 In Group P/MB, CO decreased after protamine infusion, recovering after MB infusion. In the Protamine after MB group, there was a progressive CO increase to the time of protamine injection, when CO decreased. In addition, the curves of P, P/MB and MB/P were different and presented statistical difference (P<0.05) between groups P and MB/P at 30 minutes (Figure 2B).

Groups Sham and MB showed unchanged parameters. Group P sustained an SVR increase until the end of the protamine injection. The SVR curves of Sham, P and MB were different and presented statistical difference (P<0.01) between groups P and Sham at 35 and 40 minutes (Figure 3A). 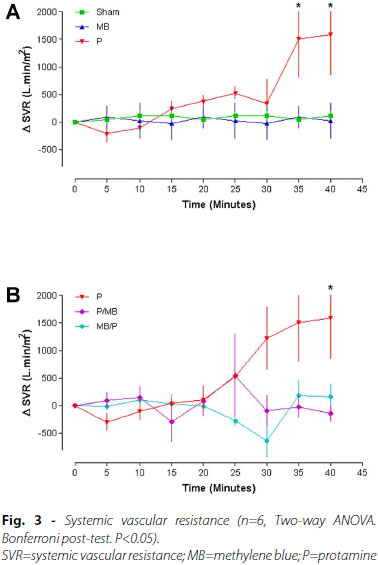 Group P/MB sustained SVR increase after P and MB injections and in Group MB/P, the SVR dropped after protamine followed by immediate SVR increase. Moreover, there was statistical difference (P<0.05) between group P versus P/MB and P versus MB/P at 40 minutes (Figure 3B).

The PAP curves in the Sham, P and MB groups showed a statistically significant increase (P<0.001) after protamine injection (15 minutes), followed by immediate decrease (Figure 4A). Also, the curves of Groups P, P/MB and MB/P showed statistically significant difference (P<0.01) between Group P versus P/MB and P versus MB/P at 15 minutes (Figure 4B). 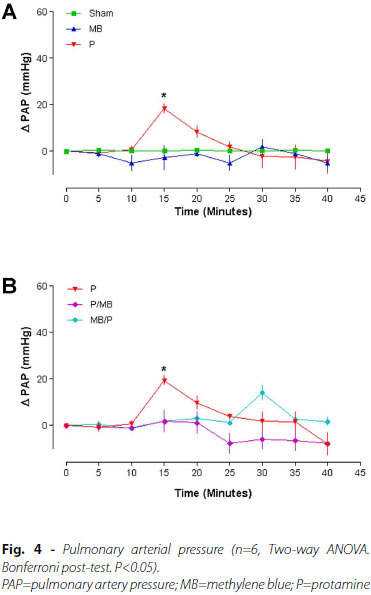 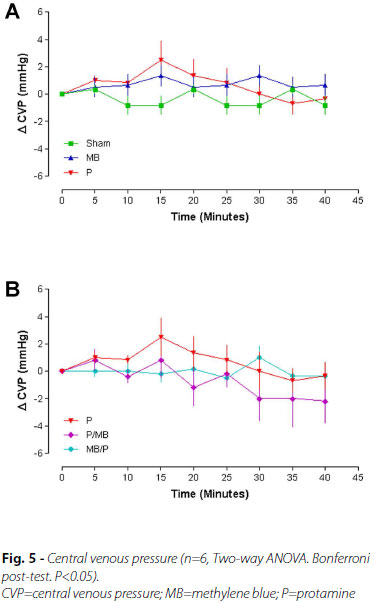 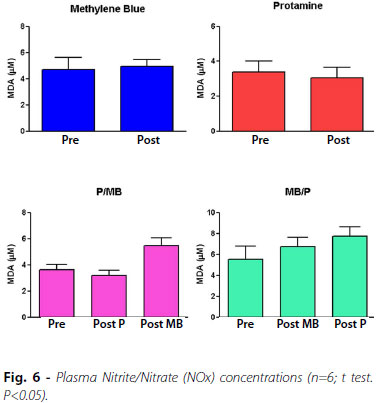 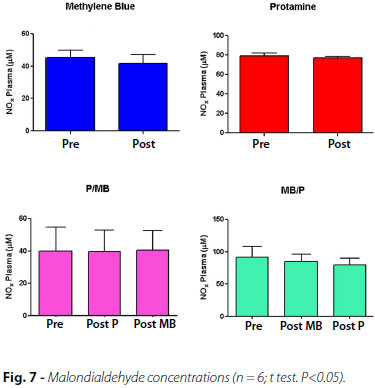 Heparin/protamine interaction is a topic of interest due to its use during cardiopulmonary bypass. These drugs are prescribed to more than 2,000,000 patients every year. From clinical and experimental data, heparin-neutralizing doses of protamine increase pulmonary artery pressures and decrease systemic blood pressure, myocardial oxygen consumption, CO, heart rate, and SVR. Those cardiovascular effects have clinical consequences that justified studies in this area.

Transitory hypotension in animals after protamine infusion has been observed as an experimental effect for > 50 years[6-8]. However, until the development of cardiac surgery, protamineinduced hypotension was an experimental finding of little clinical relevance. As protamine became largely used in clinical and surgical procedures, its reactions frequently led to severe systemic hypotension, pulmonary hypertension, and shock[9-13]. Those consequences can be potentially dangerous, especially immediately after cardiopulmonary bypass, when intravascular volumes are not constant and cardiac function may be impaired.

The precise mechanism that explains protamine-mediated systemic hypotension is unknown. However, it is suggested that protamine decreases peripheral vascular resistance rather than depressing myocardial function[9,11,16,17]. Protamine sulfate (either as a free drug or complexed with heparin) binds to an unidentified endothelial cell receptor that mediates the conversion of L-arginine to NO. NO released abluminally activates soluble guanylate cyclase in the vascular smooth muscle to induce cyclic GMP (cGMP)-mediated relaxation (vasodilation). This results in a decrease in peripheral vascular resistance and hypotension. NO released luminally would promote thrombolysis and inhibit platelet adhesion in the blood vessel[1]. Against this hypothesis, it is important to report that Castresana et al.[17], using pig vascular smooth muscle cell culture experiments, showed that protamine does not alter the responses of the intracellular second messengers, cGMP and cAMP, to the vasodilators sodium nitroprusside, atrial natriuretic peptide, isoproterenol, and forskolin. Those results do not support the hypothesis that protamine sensitizes vascular smooth muscle cells to the NO/endothelium-derived relaxing factor. Favorable to the NO/endothelium-dependent mechanism, MB has been successfully used to reverse protamine vasoplegic reactions in humans[18-20].

For the endothelium-dependent vasodilatation in the pulmonary artery, a proposed mechanism suggests that protamine sulfate binds to an unidentified endothelial cell receptor to induce NO production from the amino acid L-arginine. NO then diffuses to the underlying vascular smooth muscle to induce relaxation (vasodilatation). NO released into the lumen would promote thombrolysis and inhibit platelet adhesion in the blood vessel. The conversion of L-arginine to NO can be inhibited by NG-monomethyl-L-arginine (L-NMMA), a methylated form of L-arginine. In addition, differently from the systemic circulation, heparin can inhibit the ability of protamine to induce NO, presumably by preventing the binding of protamine to receptor[2]. Favorable to this hypothesis is the use of inhaled NO to control pulmonary hypertension[21-23].

Plasma NOx and indirect free radical activity estimated by measuring MDA levels surprisingly did not show differences. Probably, the experimental time (40 minutes) was not enough for the laboratory techniques to detect the possible stimulus for NO release and free radical (lipidperoxidation) activity.

Study limitations. It is mandatory to emphasize that the animals were not under cardiopulmonary bypass that causes systemic inflammatory reaction, since this reaction should exacerbate the hemodynamic effects of protamine. Other relevant limitation is the number of animals used for each group (n=6), except for borderline statistical significances, the statistical software pointed out that a larger number of animals would improve the data.

10. Milne B, Rogers K, Cervenko F, Salerno T. The hemodynamic effects of intraaortic versus intravenous administration of protamine for reversal of heparin in man. Can Anaesth Soc J. 1983;30(4):347-51. [MedLine]