While mediastinitis developing on the median sternotomy incision after heart surgery is rarely seen (0.5-8%), it is a complication with serious results the majority of the time[1]. Hospital stays related to mediastinitis increase hospital costs[2,3]. It frequently occurs due to the endogenous flora of the patient inoculating the surgical mediastinal cavity. After cardiac surgery with median sternotomy, the most frequently observed pathogen is methicillin-resistant Staphylococcus aureus (MRSA), which is also the bacterium isolated in most blood cultures[4,5].

After diagnosis of mediastinitis, in addition to serious antibiotic treatment, surgical interventions such as primary closure after sternum debridement using vancomycine paste instead of bone vax, closing with a muscle flap after total removal of the sternum using skeletonised left internal thoracic artery and closing the skin completely for closed drainage may be used[6-8]. Due to the bactericidal properties of vancomycin on methicillin-resistant staphylococcal infections, systemic vancomycin is the most frequently chosen antibiotic for severe infections like mediastinitis after surgery linked to MRSA[9]. However, side effects such as renal failure and hearing loss may be observed to be linked to vancomycin use[10]. To protect against these unwanted side effects there is a need to use additional treatments. Adjuvant treatments like hyperbaric oxygen (HBO) treatment are required, but there are insufficient data n this topic in the current literature[11].

Studies comparing new antibiotics like tigecycline with vancomycin have shown that tigecycline is more effective against MRSA[14]. An experimental rat model found that tigecycline was significantly superior to vancomycin in this application[15]. HBO has become a focus of interest for mediastinitis treatment in recent years; however, the patient numbers in both experimental and prospective randomised studies are insufficient[16].

This study used the ATCC 43300 strain of MRSA. The antibiotic susceptibility was assessed with a Vitek 2 (BioMérieux, Marcy l'Etoile, France) in the Microbiology Laboratory of Canakkale Onsekiz Mart University.

In vivo rat model and drugs

This study used 49 female adult Wistar rats weighting 250-300 g, with each group comprising 7 rats. The rats were randomly divided into seven groups, as follows: uncontaminated control (group 1), contaminated control (group 2), vancomycin (group 3), tigecycline (group 4), HBO (group 5), vancomycin+HBO (group 6) and tigecycline+HBO (group 7). To anaesthetise the rats, ketamine hydrochloride (90 mg/kg of body weight; Pfizer, Luleburgaz, Turkey) and xylazine hydrochloride (3 mg/kg of body weight; Bayer AG, Leverkusen, Germany) were used. Each animal was laid securely in supine position for the operation. After, the chest wall was cleaned with 10% povidone-iodine, a sterile towel was used to cover the sternum (Figure 1), and then a central line skin incision was completed. Both major pectoral muscles were divided along the central line and the sternal bone was exposed well. The mid-sternal incision was completed using a no. 15 blade; after, haemostasis was provided by sterile sponges, the mediastinum was entered behind the sternum and a pocket was formed. In the sham group rats, non-contaminated sterile physiological serum was injected into the mediasternal pocket. In all other groups a concentration of 2x107 colony-forming units (CFU)/ml of MRSA strain ATCC 43300 in 1 ml of physiological serum solution was injected into the mediastinum with an insulin injector and the mediastinum was filled with fluid. Later, the sternum and subdermis were sutured with 5/0 polypropylene suture material. 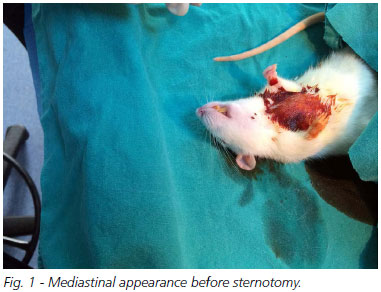 After the surgical procedure, the rats were placed in cages and monitored for hyperaemia, oedema, fever and purulent discharge for seven days. During this time, the rats had free access to standard feed and water. Treatment began 2 days later. In groups 1 and 2, no medication was administered. Postoperatively, in Groups 3, 4, 6 and 7, antibiotic treatment was given twice a day for 7 days. In Groups 5, 6 and 7, HBO with 100% oxygen at a pressure of 2.5 atm was administered once a day for 7 days (Table 1). To identify the microbial load in rats in the non-contaminated and contaminated control groups, at the start of treatment, the non-contaminated animals were sacrificed and equal size thin sections of the upper sternum were removed (Figure 2). The rats in all of the other groups had sternotomy applied 12 h after the end of the 7 day treatment. Equal-sized tissue pieces and the upper section of the contaminated part of the sternum were removed by sternotomy under aseptic conditions. Later, the animals were given a high dose of anaesthetic and sacrificed. 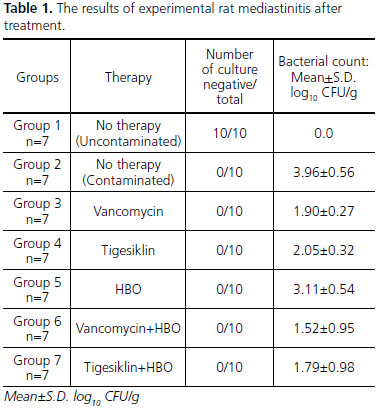 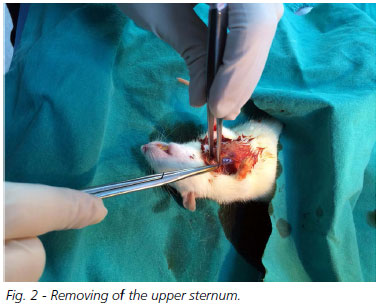 Group VII (tigecycline + HBO group; n=7): Tigecycline intraperitoneal injections at 7 mg/kg/day, twice a day for 7 days, and HBO with 100% oxygen at a pressure of 2.5 atm once a day.

Assessment of the infection

The explanted sternal upper portion and surrounding tissue samples were placed in sterile tubes and washed in sterile saline solution. Following this, they were placed in tubes containing 10 ml of phosphate-buffered saline (PBS) solution, and vortexed for 1 min to remove the adhering bacteria from the tissue and sternum. Quantification of viable bacteria was performed by culturing serial 10-fold dilutions (0.1 ml) of the bacterial suspension on blood agar plates. All plates were incubated at 37ºC for 48 h and evaluated for the presence of MRSA. The organisms were quantitated by counting the number of CFU/g per tissue. The results were converted to log form.

In this study, we aimed to assess the efficacy of vancomycin, which has been proven for the treatment of mediastinitis, in comparison with the relatively newly used tigecycline, HBO and combinations of these. In all contaminated rats, macroscopic mediastinitis findings were observed (tissue oedema). Especially in the untreated contaminated group, advanced-degree infected tissues with purulent fibrin adhesions were present. With the exception of group 1, comprising non-contaminated rats which were not given antibiotherapy, macroscopic mediastinitis findings in the groups were compared. The culture-negative rates and bacterial counts linked to mediastinitis in each group are shown in Table 1. The mean growth sizes of microorganisms in the mediastinal areas within the sternum were compared. When the quantitative bacterial counts in the mediastinal region within the sternum in the contaminated non-treated group (group 2) were compared with the treated groups (group 3-7), a significant reduction was observed (P<0.05). Comparing groups with vancomycin and tigecycline administered as prophylactics, there was no statistically significant difference observed (P>0.05). However, comparing the antibiotic groups with the same antibiotic combined with HBO, there was a significant reduction in the number of microorganisms (P<0.05). In addition, when the vancomycin+HBO (group 6) and tigecycline+HBO (group 7) were compared, there was a significant reduction in the amount of microorganisms in the group treated with combined vancomycin (P<0.05).

In this study, we used previously applied experimental rat mediastinitis models[18,19]. When the literature was examined, we found several animal models using tigecycline, vancomycin and HBO against MRSA, so we aimed to use these antibiotics and HBO. However, we did not discover any rat model involving the combined use of tigecycline and HBO[15,20-22]. Tigecycline was first derived from minocycline, and is a broad spectrum antibiotic of the glycylcycline class with broad in vitro activity[23,24].

There is no requirement to regulate the dose of tigecycline for patients with renal failure or even those with mild to moderate hepatic dysfunction; moreover, it is not induced or inhibited by cytochrome p450[23,25]. In addition, studies of medication interactions have shown that when tigecycline is used with medications like warfarin and digoxin, no side effects were observed in healthy individuals[26,27]. The most frequently observed side effects are mild to moderate nausea and vomiting in the early stages, mainly the first 1-2 days[28].

Tigecycline has been used successfully in the treatment of many severe and mortally progressing types of mediastinitis, such as Mycobacterium chelonae, pan-resistant Acinetobacter baumannii mediastinitis and multidrug-resistant Klebsiella pneumoniae mediastinitis[29-31].

Vancomycin is an antibiotic frequently chosen for the treatment of severe MRSA infections like mediastinitis. As this has a slow killing effect on glycopeptide bacteria, it should be used for treatment of long-term diseases and this may cause a risk of severe kidney failure for patients[32-34]. Although vancomycin is not routinely recommended for use in cardiac surgery, it is important to use it in patients with an increased risk or cases with a high incidence of MRSA[35]. However, there has been no study on the role of tigecycline in a rat model or in combination with HBO.

Another aim of our study was to compare the efficacy of HBO combined with antibiotic treatment or used alone for MRSA mediastinitis. HBO therapy involves the treatment of patients with 100% oxygen at higher than atmospheric pressure within a hyperbaric chamber[36]. HBO causes increased dissolved oxygen levels in blood; this in turn causes hyperoxia in tissues. It restores the bactericidal capacity of leukocytes in hypoxic wounds by increasing tissue oxygen tensions[37]. Moreover, it has been used to treat difficult cases for many years. Although the effective mechanism of HBO is not fully understood, it has been observed to activate many mechanisms, including collagen synthesis[38], accelerated macrophage infiltration[39], fibroblast proliferation[40,41], growth factor proliferation[42,43], modulation of hypoxia-inducible factor 1 alpha[44], improved antibactericidal capacity[45], bacteriostatic effects[46,47] and stimulation of angiogenesis[48]. In this study, when the use of HBO alone was compared with the untreated group with MRSA mediastinitis, a reduction in the number of bacteria was found; however, when HBO alone was compared with vancomycin and tigecycline, the effect was not observed to be significant.

HBO (100% oxygen once per day for 90-120 min at 2-3 atm) can generally be combined with antibiotics like penicillins, beta-lactamase inhibitors, cephalosporins, aztreonam, imipenem, vancomycin, clindamycin, rifampin, aminoglycosides, fluoroquinolones, trimethoprim/sulphamethoxazole, metronidazole, teicoplanin, quinupristin and dalfopristin, and is used to treat osteomyelitis. Thus, the efficacy of an antibiotic is increased in hypoxic tissues[49]. It has been observed that HBO increases the effectiveness of debridement and antibiotic treatment. Topuz et al.[50] observed heightened efficacy when HBO was combined with antibiotics and surgery for spinal tuberculosis patients.

In our study, similar to other research using HBO and combinations of a classic and new antibiotic like vancomycin and teicoplanin, we researched the efficacy of these treatments in rats with MRSA mediastinitis. While HBO alone resulted in a significant drop in the number of bacteria, its combination with either antibiotic significantly increased the efficacy of the medication.

When this study is evaluated, there are some limitations to consider. The pathogenic bacteria were directly inoculated to the sternal and mediasternal layers, and this situation is not appropriate for clinical comparison. For ethical reasons, the treatment continued for 7 days, but longer duration of treatment may produce better results. For technical reasons, we did not obtain sufficient data on systemic infection (direct histological examination, white blood cells). Moreover, we did not obtain sufficient data on the serum antibiotic concentrations. In spite of these limitations, this is the only study to compare the effects of HBO with new generation antibiotics like tigecycline in the in vivo environment.

We conclude that the combination of HBO with antibiotics shows a significant effect on MRSA mediastinitis. HBO can also reinforce antibacterial therapy and speed up healing. MRSA mediastinitis can be treated without requiring multidrug combinations, thereby decreasing the required dose of medication, and as a result, reducing its side effects. In the future, ethical permission for human studies will determine the efficacy of HBO in the treatment of MRSA mediastinitis.

Conflict of interest: Authors declare that there are no conflicts of interest.

AT Manuscript writing and critical review of its content; final manuscript approval