Coronary artery bypass surgery (CABG) is one of the operations most frequently performed all over the world. Conventional CABG is performed by using cardiopulmonary bypass (CPB) device and called as on-pump CABG, whereas CABG performed without using CPB is called as off-pump CABG. Although postoperative complications are never desirable, they may sometimes be inevitable for some patients. Pleural effusion following CABG is still being encountered despite all efforts of cardiovascular surgeons.

It is thought that many factors ranging from surgical technique to the preoperative medications have a role on the development of pleural effusion in postoperative early period. Primarily, there are two basic reasons for pleural effusions that occur in the period so-called perioperative period, which comprises postoperative first one-week. The first is diaphragm disorder and the second is harvesting LIMA[6-10]. Heart failure after CABG decreased cardiac output after surgery; pleural infection, pulmonary embolus, and chylothorax are among the causes of postoperative pleural effusion[5,11].

The present study investigated effect of using pump on postoperative pleural effusion in the cases that underwent CABG, as well as the statistical significance of this effect.

A total of 256 patients, who underwent isolated CABG surgery in the Cardiovascular Surgery clinic and had no valvular pathology or connective tissue disease (Marfan syndrome, etc.) were enrolled in the study. The data were retrospectively collected.

All patients underwent isolated CABG surgery by cardiopulmonary bypass (CPB) device, beating heart technique or beating heart technique under CPB support. Induction of anesthesia was performed with fentanyl, midazolam and pancuronium bromide. Standard median sternotomy was performed and LIMA and other vascular conduits were prepared before CPB has started. After administering 300 IU/kg heparin, CPB was started by roller pump using standard aortic and two-stage venous cannula. All patients initially received high-potassium crystalloid and then cold standard crystalloid cardioplegia and, at the end, hot-shot cardioplegia during surgery. Whilst the left internal mammary artery (LIMA) was used in all of the cases, the right internal mammary artery was not used. Meticulous aseptic technique was performed in the surgery. Unnecessary use of electro-cautery and unnecessary perfusion in CPB (Luxury) were avoided. Heparinization was performed using 150 IU/kg heparin in the patients who underwent surgery with beating heart technique. Distal anastomoses were performed using Octopus and Starfish. Anastomoses to the aorta were performed using side clamps both in on-pump and off-pump technique.

In on-pump or off-pump CABG patients; the left pleura was standardly opened either while preparing LIMA during surgery or just after the LIMA has been prepared. Cold isotonic solution (slash) was used for local cold effect in all on-pump CABG patients. The right pleura was opened in all patients who underwent off-pump CABG. At the end of on-off pump CABG procedure, mediastinal and pleural drains were inserted through the subxiphoid area. Inserting mediastinal and left and right pleural drains through the subxiphoid area is a standard procedure in our clinic.

Under normal conditions in the postoperative period, acetylsalicylic acid (Coraspin 300®) was commenced at a dose of 300 mg/day together with enteral nutrition in all patients in order to reduce the risk of complication after CABG. Cefazolin sodium (Cefamezin®-IM/IV), which is used as standard prophylactic antibiotic in our clinic, was administered at a dose of 1gr for once 30 minutes before surgery and then continued for 72 hours after surgery at a dose of 1g at 8 hours intervals. Postoperative blood glucose regulation in diabetic patients was strictly done using insulin glargine 100 IU/ml (Lantus® flacon) and human soluble regular insulin 100 IU/ml (Humulin-R® flacon). Insulin infusion was not avoided when needed. Blood glucose concentration was kept at the level of 200 mg/dl in all patients.

After they were admitted to the CVS clinic, pleural fluid was controlled with a posteroanterior chest radiography until discharged by 24 hours interval. Patients were evaluated with ultrasonographic costophrenic angle blunting. The patients who presented excessive pleural liquid (500 cc and above) were fitted Pleurocan (8-10French-B. Braun, Melsungen, Germany) If the mount of the fluid taken from the pleural space was 500 cc or above, it was considered as pleural effusion.

Statistical analyses were performed by SPSS program (SPSS Inc., Chicago, IL, USA). Statistical significance of nonparametric data between groups was analyzed by Pearson Chi-Square analysis and Ficher's Exact Test (it was used because observed values were below the expected values). Parametric data were presented as minimum, maximum and mean±standard deviation and statistical significance of parametric data between the groups was analyzed by independent student t-test. The result was considered significant if two-tailed P value is below 0.05 (P<0.05) (Table 1). 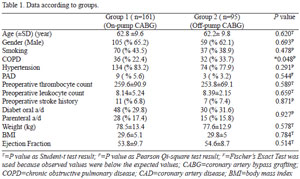 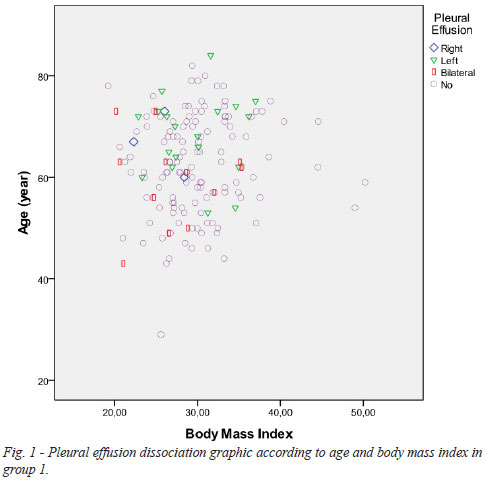 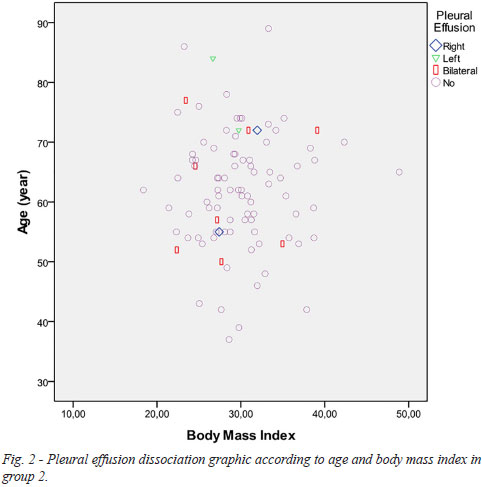 Conventional CABG is performed by using cardiopulmonary bypass (CPB) device and called as on-pump CABG, whereas CABG performed without CPB is called as off-pump CABG. On-pump CABG is agreed as the gold standard, but this method has some physiological effects. These effects include thrombocytopenia, activation of complement system, immune suppression, and inflammatory response that leads to organ dysfunction. There are two basic causes of perioperative pleural effusion following CABG. The first is pleural effusion due to atelectasis that results from diaphragm dysfunction. It is known that local cold application (slash) during CABG is directly associated with diaphragm paralysis and atelectasis. Correlation has been demonstrated between size of atelectasis and amount of effusion[4]. The second is the pleural effusion due to bleeding that occurs after harvesting internal mamarian artery. Pleural effusion occurs during and after bleeding, which results from trauma to parietal pleura during IMA harvesting. Slash was applied on all participants who underwent on-pump CABG surgery in our study. We tried to escape from adverse effects of slash by using only top of the heart and hood which it is save from phrenic injury. Our study did not include the patients who present diaphragm paralysis.

Pleural effusion may also develop due to congestive heart failure that occurs after CABG[11]. Decrease in cardiac output after surgery may lead to pulmonary edema and bilateral pleural effusion. All of participants in our study have no congestive heart failure. Pleural infection in early period, pulmonary embolus and surgery-related chylothorax as well can be considered among causes of pleural effusion[5]. There are studies demonstrating that some intraoperative techniques reduce pleural effusion. Gullu et al.[12] reported that preserving pleural integrity while harvesting internal mammary artery reduces postoperative pain and the incidence of atelectasis and pleural effusion. It has been emphasized that using LIMA in coronary bypass surgeries enhances effusion as compared to using saphenous vein alone. In our study, LIMA was harvested and left pleural space was opened in all patients.

There are studies demonstrating that inserting thoracic drain through intercostal space negatively influence patient comfort in early postoperative period and, in addition, increases the incidence of atelectasis and pleural effusion that occur due to chest wall trauma[16-19]. Contributing to some studies, Wimmer-Greinecker et al. reported that restriction in patient's movements until the removal of chest tubes causes decrease in pulmonary functions due to restricted inspiratory capacity[17-19]. There are studies stating that inserting subxiphoidal drain for pleural drainage is as effective as intercostal drains. In accordance with our clinical protocol, subxiphoidal chest tube was inserted in all patients aiming at elimination of unfavorable effects of intercostal drains. We had placed the chest tubes at subxiphoidal localization in all surgical procedures.

Atelectasis may be prevalent after CABG due to paralysis/paresis of diaphragm. Fedullo et al. demonstrated left diaphragm dysfunction after CABG in 16% of the patients via US[6]. Application of local cold cardioplegia causes phrenic nerve paresis as well as left inferior lobe atelectasis and increase in effusion between the 2nd and 28th postoperative day[7,8]. In a 30-patient study, Vargas et al.[4] demonstrated 87% atelectasis via computed tomography on the 2nd day after CABG. In the same study, they emphasized that there is significant correlation between the degree of atelectasis and pleural effusion between the 2nd and 7th postoperative day. In our study, we had applied respiratory physiotherapy on all patients from extubation until hospital discharge.

We thank Assoc. Prof. Ismail Keskin (Selçuk University, Zootechnics Division, Department of Biometry and Genetics, Konya, Turkey), PhD for his contributions to the evaluation of results and statistical analysis.

MO: Final approval of the manuscript; manuscript writing or critical review of its contents

FA: Final approval of the manuscript; manuscript writing or critical review of its contents