Heart transplantation aims to improve the life expectancy and quality of life of patients with end-stage heart failure. Although the medical criteria of indication/contraindication for transplantation are well defined, the psychosocial criteria, which also affect the results of the procedure, are more difficult to determine[1-7].

Patients on the heart transplantation waiting list often experience a period of "physical and psychological instability"[1]. Clinical worsening, difficulties in daily activities, impairments in cognitive and social functioning as well as in emotional well-being, and elevated symptoms of depression and anxiety are frequently observed[8,9].

For many patients, the heart transplantation evaluation means the end of a long time living with deteriorating health and the beginning of a new treatment modality. While there is hope for the future, it is necessary to face surgery; despite the risks, the procedure means a chance to survive[1].

The data were obtained from patient records containing the pre-surgery psychological evaluations performed by psychologists from the multidisciplinary cardiology team between 2004 and 2012. The sample size corresponds to the number of patients evaluated during this period and is justified by the relatively low frequency of heart transplantations performed at the Institution. The psychological evaluation protocol includes the Quality of Life Questionnaire (SF-36)[11], the Beck Depression Inventory[12], and an interview script. The SF-36 is a generic self-reporting instrument consisting of 36 items that assess eight domains of quality of life: physical functioning, physical role functioning, bodily pain, general health, vitality, social role functioning, emotional role functioning, and mental health. Higher scores (total score or score of each domain evaluated) indicate a better quality of life[11]. The Beck Depression Inventory is also a self-reporting instrument widely used to assess the presence and severity of symptoms of depression in adults. It consists of 21 items, and the total score measures the severity of the symptoms of depression presented (0-11: minimum; 12-19: mild, 20-35: moderate, 36-63: severe)[12].

The data were analyzed using descriptive statistics and the Mann-Whitney test with P<0.05. 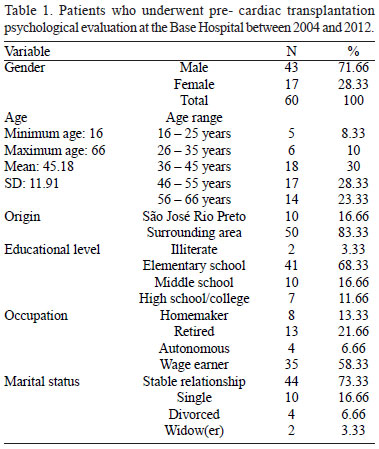 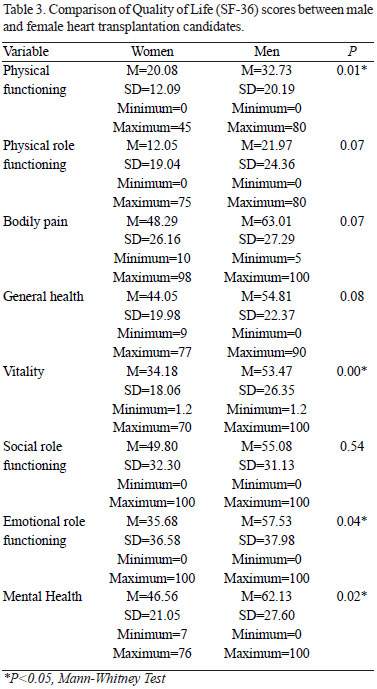 The majority of the patients evaluated were male (71.66%) and aged between 36 and 66 years. According to DATASUS (Department of Informatics of the Unified Health System-SUS), the majority of heart failure hospitalizations occurs in elderly patients, with ages of 60 years or higher, followed by patients in the age range of 20-59 years[13]. However, the indication for heart transplantation in other age ranges is associated with factors such as etiology and progression of the disease[14], as observed in this study as well as in a study conducted by Helito et al.[13].

The majority of the patients evaluated were from cities in the São José do Rio Preto area. The Base Hospital provides tertiary care for this area, which comprises 101 municipalities and a population of two million inhabitants. Because the Base Hospital is a reference institution for organs and tissue transplantations, a high concentration of patients from the area is expected.

Elementary school was the most frequent educational level among the patients evaluated (71.6%), and the predominant occupations were associated with manual labor (e.g., mason, farm worker) and thus consistent with the educational level of the sample. This finding is similar to results from other studies[13] performed at the Institution and most likely reflects the profile of patients assisted through the Unified Health System (Sistema Único de Saúde - SUS)[4,8,13]. The low educational level is a factor that can affect treatment adherence because it can impair the comprehension of important aspects of the disease and its management[13,15]. However, another study conducted at the same Institution revealed that the heart transplantation survival rate was not different between patients with low and middle socio-cultural status[16]. According to the authors, this result is associated with the social support network available to the patients, which consists of caregivers, non-governmental organizations, and the Unified Health System itself [16].

The mean depression score was higher in women (21.41) than in men (14.61), although there was no significant difference. This finding is consistent with the literature, which indicates that after puberty, the prevalence of depression in women is twice the prevalence in men[19-21]. Several explanations have been suggested for this fact. Nolen-Hoeksema[20] cites two main aspects identified in studies on this topic: 1) women usually have less power than men and therefore experience certain traumas (e.g., sexual abuse) and other chronic stressors (e.g., poverty, bullying, and restriction of opportunity) more frequently; 2) even when men and women are exposed to the same stressors, women are more vulnerable to depression due to biological differences.

Approximately 20% of patients with cardiovascular diseases exhibit depression, which in turn is an important predictor of morbidity, mortality, and poor quality of life[22,23]. Thus, psychological treatment (with or without antidepressant medication, depending on the severity) has been recommended for patients with cardiovascular disease and depression. Among the high quality clinical trials that evaluate psychotherapeutic treatments of depression, Cognitive Behavioral Therapy (CBT) presented positive results[22]. The time when these patients start psychotherapy after the cardiac event can also influence the treatment outcome. However, studies aiming to clarify the proper time to start the psychotherapy, the variables of the psychotherapeutic process itself, and the patient characteristics (e.g., gender) are still needed[22]. It seems that one of the most important problems of the association between cardiovascular disease and depression is that the latter is underdiagnosed[24]. The pre-surgical psychological evaluation is an important tool for the diagnosis of depression among heart transplant patients.

The pre-transplant quality of life can be hampered by the worsening of the symptoms and therefore by the difficulties in performing activities of daily living and the associated emotional damage[13,25].

In this study, women presented worse quality of life than men in all domains assessed by the SF-36. This difference was significant in the physical functioning, vitality, emotional role, and mental health domains. Differences in quality of life between men and women, with greater impairment observed in women, have been consistently reported in both the Brazilian and international literature on patients with cardiovascular diseases[26,27]. It is recognized that there are important differences "between women and men with regard to the function and progression of diseases of the cardiovascular system"[27]. Thus, it is necessary to identify these differences to provide adequate treatment according to gender differences. One of these differences, also identified in this study, is that women are more vulnerable to depression. In addition to the need for research on this subject with Brazilian patients, it is very important to have interdisciplinary teams that evaluate the specific needs of each patient within a biopsychosocial health model to provide adequate treatment.

The absence of a global and interdisciplinary analysis of patients leads to a poorer quality of services and consequently increases the costs of the disease not only for the patient, family, and society but also for the entire healthcare system.

The authors would like to express appreciation and thanks to Dr. Reinaldo Bestetti for his important comments in the letter published in this issue.