Penetrating cardiac trauma still carries high mortality rates, even with immediate medical attention and advanced medical evacuation services. The nature of the injury itself, the involvement of an organ as vital as the heart as well as rapid clinical deterioration all cooperate to unfavorable outcomes in both prehospital and inhospital environments. In addtion, the rampant growth of urban violence and increased access of civilians to firearms have contributed to the increased incidence of penetrating cardiac injuries [1-3].

Although accidental injuries constitute a very small part of penetrating cardiac injuries, they are still serious. In this paper, we present an unusual case of penetrating cardiac injury caused by a metal fragment that broke off from one of the blades of a grass-cutting tool. The fragment caused transfixing lesions in the stomach, diaphragm, and heart and lodged itself in the lungs. All lesions were repaired. The patient had an uneventful postoperative course and 2 years after surgery he is still asymptomatic.

This work was performed after informed consent from the patient and approval of the Ethics Committee of the Santa Casa de Londrina Hospital (Londrina, PR, Brazil).

A 23-year-old male patient was referred to the emergency department of the Santa Casa de Londrina Hospital with perforating wound by a metallic artifact (shrapnel) in the thoracoabdominal face. The shrapnel, according to witnesses and the victim himself, broke off from a blade of the grass-cutting tool he was operating while working in the middle of a highway. Signs of hemodynamic instability started during transport to the hospital, with hypotension and confusion upon admission.

Support measures were initiated immediately after his entry. Chest radiography showed a solid fragment lodged in the heart projection (Figure 1A), and computed tomography showed possible heart damage due to myocardial tapering in ventricular apex (Figure 1B) and presence of a small volume pneumoperitoneum. According to computed tomography images and reconstruction of the trajectory, the shrapnel transfixed the ventricular apex and lodged itself in the lower lobe of the left lung (Figure 1C and D). 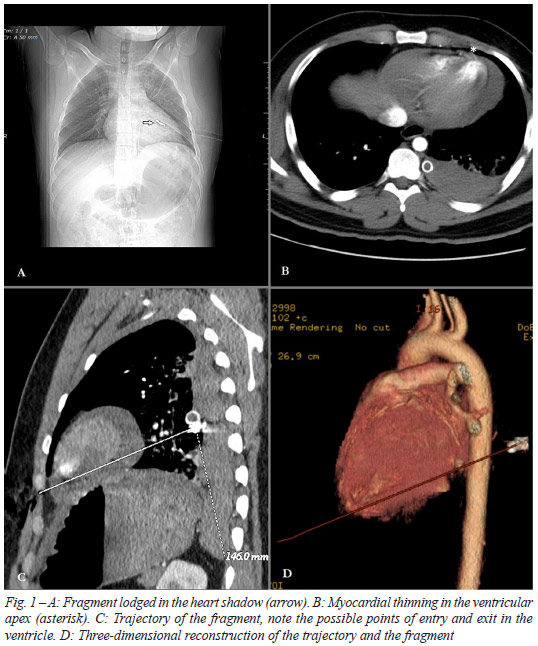 Faced with a possible cardiac injury, imminent hemodynamic collapse, and presence of intra-abdominal injuries, the patient was referred to surgical exploration. The access to the chest cavity was obtained by left anterolateral thoracotomy and soon after its opening lots of blood and food debris were observed, as well as injuries to diaphragm and lower lobe of the left lung.

The cavity was washed and the diaphragmatic hole was closed by continuous suture. After pericardial dissection we observed two sources of active bleeding (inlet and outlet) in topography ventricular apex, one anteriorly and the other posteriorly. The lesions were punctate and it was possible to fix them without the use of extracorporeal circulation by directly suturing the wounds with 2.0 polyester sutures with pledges. After removal of the fragment lodged in the lung the injury was repaired by continuous suture with polyglactin 910 3.0. The diaphragmatic injury, previously closed by continuous suture, was repaired again with interposition of a bovine pericardial patch.

We also performed an exploratory laparotomy, which revealed a large amount of food debris, a transfixing injury in the stomach, and no lesions in other organs. The gastric injury was repaired by direct suture and the abdominal cavity was subjected to profuse washes before its closure, in accordance with standard technique. The patient had an uneventful postoperative course and was discharged 11 days after admission. He has been asymptomatic for 2 years since surgery, without the use of medication. At follow-up, routine exams showed no changes: echocardiography with preserved ventricular function, normal left ventricular segmental contractility, heart valves with good opening and mobility, atrial and ventricular septal integrity, and an ejection fraction of 66%; ergometric test without evidence of ischemia; and chest CT angiography with only remnants of a repaired myocardial injury (Figure 2). 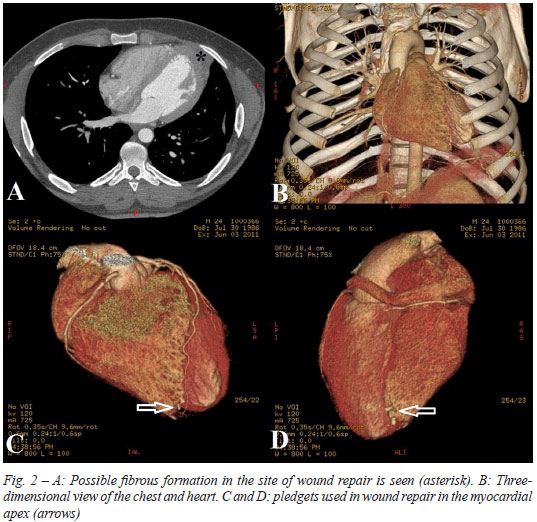 The heart, a vital organ protected by the thoracic cage, rarely suffers penetrating injuries. Penetrating cardiac injuries had been considered lethal for centuries, with sporadic clinical observations suggesting possible survival, until in 1896 Rehn demonstrated the feasibility of suturing a heart wound [4]. Nevertheless, it was Harken who during World War II, compiled an impressive number of 130 soldiers operated on due to cardiac lesions by shrapnel, with no deaths recorded [4]. In Brazil, the first successful sutures of a cardiac injury were performed by Brauner in 1927, and Zerbini in 1942, who operated on a 6-year-old boy who was hit by metallic shrapnel in the precordium and suffered an injury in the anterior descending coronary artery, marking the first steps of Brazilian heart surgery [5,6].

Despite the historical importance of cardiac trauma in the development of medicine, heart penetrating wounds are rarely seen in emergency rooms, since most victims do not survive the complications of trauma prior to admission. Death usually results from cardiac tamponade or exsanguination, conditions that lead to death within minutes if not diagnosed and treated in time. Therefore, little is known about real mortality rates - prehospital mainly - of penetrating cardiac injuries [1,2]. The most frequent causes are injuries caused by knives and guns, mainly due to increasing urban violence [1-3].

Penetrating trauma caused by these weapons usually affect the right ventricle, which lies in the anterior chest wall, followed by left ventricle and right atrium, respectively [7]. Injuries caused by objects other than those mentioned above - like needles, shards, splinters, bone fragments, and surgical artifacts - are commonly associated with unintended injuries, and can result from iatrogenic complications during invasive procedures [1,8,9].

In the case patient described in this report, the small size, pointed shape, high speed and punctiform area of the the metal inflicted against the tissues of the victim induced the shrapnel to act as a projectile triggered from a reduced distance, with an upward trend, reaching and transfixing the myocardium but without the explosive capacity characteristic of a gun projectile. It is likely that the severity of the cardiac damage was mitigated by the low energy dissipated by the artifact. In addiction, the ventricular myocardium may have staunched the bleeding partially and temporarily.

Penetrating heart injuries configure not only a challenge against time for emergency medical services, but also a scenario of difficult diagnosis since their clinical presentation may vary from a stable and innocent condition to extreme hemodynamic collapse and potential catastrophic outcome. As for the surgeons, they need to become familiar with the possibility of cardiac lesions in cases of penetrating injuries in the thoracic region, specifically in the area located between the clavicles, the costal margin, and the hemi-clavicular lines ("cardiac box") [2].

However, in less conventional situations or in certain traumatisms resulted from peculiar kinematics, cardiac lesions may require more precise tests to be diagnosed. Among the less common causes of cardiac trauma, foreign bodies, such as fragments or shrapnel, represent a small portion of accident statistics for these objects. A study conducted by Vollman et al. [10] in the pediatric population in the period of 1990-2004 showed lesions in extremities were the most frequent injuries involving grass-cutting tool machinery. According to the study, they were mostly due to direct contact with the blades, with less than 10% of the lesions being associated with foreign objects thrown or given off by these machines, and there were no cases of cardiac injury.

We found only two reports of two patients who suffered cardiac wounds due to similar artifacts to the one from our patient. In both cases, the right ventricle was affected and immediate surgical correction was successful [8,9].

Immediate medical care, accurate diagnosis and prompt surgical intervention are crucial to favorable outcomes in patients with heart penetrating injuries. In some peculiar cases, diagnosis can be difficult and may require more precise exams and subsequent surgical correction, as in the case presented here.

CJTK: Drafting of work, making the images and discussion