Microbial infection of the endothelial lining of any part of the heart, infective endocarditis (IE), is an uncommon but life threatening condition. Despite advances in diagnosis, antimicrobial therapy, surgical techniques, and management of complications, the incidence has not decreased in the past 30 years and patients with IE still have high morbidity and mortality rates related to this condition [1].

Its management aims to eradicate the infecting organism as soon as possible mainly with antibioticotherapy but clinical complications and treatment failure suggest surgery up to 60% of the cases [2]. IE effecting aortic valve accounts about 40-67% of all cases and about 60-70% of these cases undergo surgery in the acute phase [3]. In spite of the high mortality and morbidity it carries, surgical therapy is still the mainstay in the treatment of aortic valve IE. Numerous studies have assessed different risk factors for mortality and morbidities in the treatment of IE but risk factors for surgical treatment of aortic valve IE patients need to be clarified.

In this study, we have retrospectively assessed the results of the surgical treatment of patients with aortic valve endocarditis over a period of 26 years in an attempt to address these issues.

The study was approved by the local hospital ethics committee. The patient data were collected from the hospital records retrospectively. From June 1985 to January 2011, 174 consecutive patients with aortic valve endocarditis underwent surgery at our institution. For the definitions of active, healed, native, and prosthetic and culture negative endocarditis, modified Aranki criteria have been used [4]. The presence of acute or chronic inflammatory changes at microscopy confirmed the diagnosis of endocarditis.

There were 138 (79.3%) male and 36 (20.7%) female patients aged 39.3±14.4 (9-77) years in average. One hundred and forty-seven (84.5%) patients were presented with native valve endocarditis (NVE) and 27 (15.5%) with prosthetic valve endocarditis (PVE). Vegetations on the mitral valve were detected in 38 (21.8%) cases and peri-prosthetic leakage (PPL) was present in 13 patients. Thirty-two (18.4%) patients had a history of previous cardiac surgery and four of them had two cardiac operations previously. Coronary angiography was rarely performed in order to avoid any embolic complications. Of the 27 patients with septic emboli, one of them had both peripheral and central emboli preoperatively. The preoperative characteristics are summarized in Table 1. Culture-negative endocarditis was present when no microorganism could be identified either on serial blood cultures or on cultures from the explanted valvular tissue in patients presenting with the clinical picture of endocarditis. The results of the microbiologic studies can be seen in Table 2. 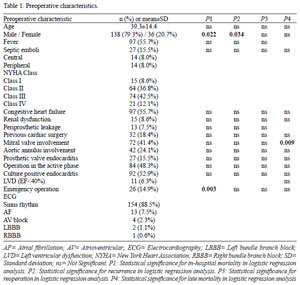 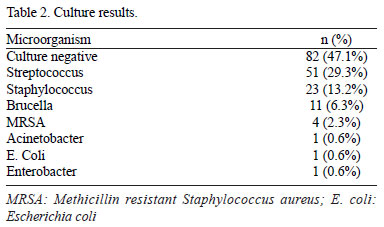 The diagnosis of IE was performed according to the Duke criteria [5]. All patients were examined by transthoracic or transesophageal echocardiography. Valvular destruction was evident in 120 (69.0%) cases and aortic annular involvement was present in 42 (24.1%) cases. Gross vegetations on aortic valves were detected in 25 (14.4%) patients and vegetations on mitral valve in 38 (21.8%) cases preoperatively. Operations were performed during the active phase of infection in 84 (48.3%) patients. The indications for emergency surgery were high as well as mobile vegetations on the aortic valve, acute leaflet rupture and cardiac decompensation, periannular extensive abscess with intracardiac fistula and prosthetic valve dysfunction.

All patients underwent moderate (28ºC) hypothermic cardiopulmonary bypass by means of bicaval cannulation with cannulation of either the ascending aorta (169 patients) or the femoral artery (5 patients). The left ventricle was vented through the right superior pulmonary vein. Isothermic blood cardioplegic solution was administered via antegrade and retrograde route during aortic cross-clamping.

For eradication of the aortic valve endocarditis, radical debridement of all the necrotic and infected tissues was performed. In cases with annular involvement, aortic annulus was skeletonized. All infected and necrotic tissue around the annulus and when present, within the abscess and fistula between the ventriculoarterial junction and the sinotubular junction were resected. All vegetations were removed. When the aortic valve was not extensively damaged, vegetectomy and reconstruction either primary or by using pericardial patch was preferred as described before [6]. Before cardiopulmonary bypass, a patch was harvested from the pericardium, stabilized with 0.62% glutaraldehyde solution for 5 minutes, and rinsed thoroughly with 0.9% saline solution. When necessary, the pericardial strip trimmed to an appropriate length and was sutured continuously with 5-0 polypropylene according to the area to be patched. The completely resected annular area was covered with the glutaraldehyde-treated autologous pericardial patch sutured to firm, fibrous tissue for a secure anastomosis or valve implantation [6,7].

Mitral valve involvement was present in 72 (41.4%) cases. Two hundred and eighty-two procedures were performed on 174 patients. The list of procedures can be seen in Table 3. In the cases with aortic PPL, all prostheses were replaced except for four patients that had a primary repair of the periprosthetic leak. Primary repair of the mitral PPL was preferred in two cases. 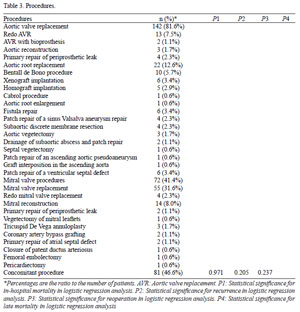 All patients received at least four weeks of antibiotherapy postoperatively. Broad range antibiotics (vancomycin and aminoglycosides) were preferred in culture-negative cases. Antibiotics were arranged according to the antibiograms results in culture-positive patients. After the patients were discharged from the hospital, they were involved in a follow-up program in the outpatient clinic. Follow-up was complete in 95.2% of the patients. Seven patients were lost to follow-up. The mean duration of follow-up was 7.3±4.2 years (0.1-18.2) adding up to a total of 1030.8 patient/years.

The statistical analyses were performed using Statistical Package for the Social Sciences (SPSS) 16.0 statistical software package. All continuous variables were expressed as mean ± standard deviation with the ranges and discrete variables as frequencies and percentages. Comparisons of the discrete variables were made by chi-square test or Fisher's Exact test where appropriate. The survival, freedom from recurrence and reoperation analyses was made with Kaplan Meier analysis. Logistic regression analyses were performed for the factors affecting early and late mortality, recurrence and reoperation. 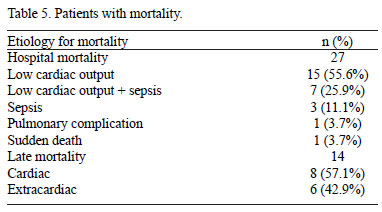 Follow-up was complete in 140 (95.2%) cases. Seven patients were lost to follow-up. Fourteen (8%) patients had mortality after discharge. Three of them were female. The data of the patients with early and late mortality have been summarized in Table 5. 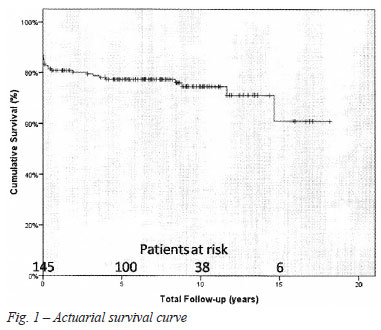 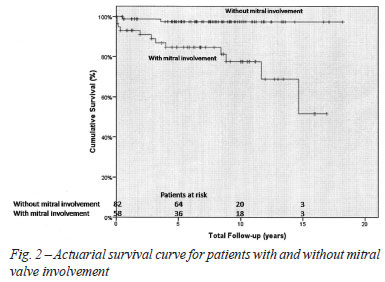 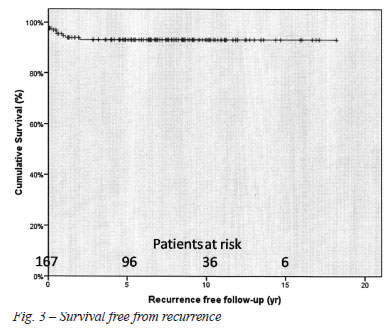 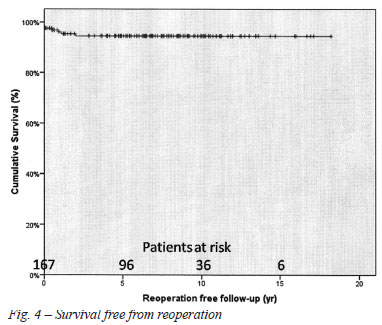 Despite the advances in the operative and postoperative techniques, surgery is still associated with a significant mortality rate. The latest study about the results of surgery for IE in America reports 17% overall mortality [9]. There is a wide range of variation in mortality rates ranging from 6% to 33% [2,10-14]. We have previously reported 12% mortality for active IE [15]. The slight increase (15.5%) was mainly because of the patient profile. In our previous report, congestive heart failure was present in less than 40% of the cases, however, in this group, more than 55% of the cases had congestive heart failure. Another striking difference is the lack of PVE cases in the previous report. In fact, regression analysis did not give PVE as a risk factor for in-hospital mortality. Delay et al. [16] did not observe significant differences as well. A recent study from Sweden reported 30-days mortality for surgically treated native and PVE as 5.2% and 14.7% respectively, but did not mention PVE as a risk factor [13].

However, it may affect the overall mortality in many different ways. Especially the preoperative status is an important factor. Another important determinant was emergency operation. The significant association of emergency operation and in-hospital mortality was not unexpected. Kirali et al. [15] reported significant association of urgent operations in NVE before. The indications for emergency operation in IE were documented with high level of evidence [17]. The poor outcomes were also reported by Revilla et al. [18]. They found that the poor outcomes were associated with persistent infection and renal failure but not with heart failure. More recently, Koeda et al. [12] reported even mild renal dysfunction at the time of admission as an important predictor of early mortality. However, we did not detect any association of renal failure and mortality. Female gender was significantly associated with in-hospital mortality in our analysis like others [19,20].

LCO and postoperative renal dysfunction were found to be associated with in-hospital mortality which suggests that cardiorenal interaction may play an important role in the deterioration of IE. Their associations with postoperative mortality were similar to a recent reports [9,10,21]. Operation in the active phase was not a significant factor for any dependent variable in our analyses (Table 1). Although the relation is not so obvious, it may still be a risk factor for in-hospital mortality. The high rate of active phase operations (almost 50%) in this cohort could be understood this way.

The primary aim of surgery is the eradication of infective tissue and the reconstruction of cardiac morphology. Mode of surgery (replacement/repair) or the type of prosthesis (mechanical/ biologic) was reported to have no influence on mortality [19,22]. Although biological solution is recommended especially for aortic root involvement [23], biological prostheses, especially allografts were reported to have a significant reoperation rate which increases with time [24]. We used mechanical prosthesis in the majority of the patients. The low recurrence and reoperation rates in this study confirm our preference for the valve substitute.

The long-term survival given in this report is compatible with recent reports [9,11]. One of the most interesting results of our analysis was the significant lower survival in patients with mitral valve involvement. The regression analysis revealed that presence of mitral valve involvement was significantly associated with long-term mortality (Table 1) and this association was confirmed by the Kaplan Meier analysis results (Figure 2). Multivalve involvement association with higher mortality was reported before [10], but the lower survival was not mentioned. The most possible explanation may be the extent of the destruction by the infectious process. In the analysis of patients with double valve endocarditis, Gillinov et al. [25] report that increasing age was significantly associated with lower long term survival. Age was not a significant predictor in our analysis.

One of the most important aspects of surgery for IE is the recurrence. The recurrence was 5.7% in our patient group (Table 4). The rate of recurrence is similar to others [26] and the recurrence-free survival is very satisfactory (Figure 3). The only significant association with recurrence was male gender (Table 1). The reoperation-free survival rates were also satisfactory. These satisfactory results were due to the high rate of mechanical valve utilization according to our point of view. This fact was also discussed by others [19,24]. Fedoruk and colleagues reported that type of prosthesis did not affect survival and recurrence rates were primarily associated with human immunodeficiency virus infection and intravenous drug usage [27]. None of the patients in our cohort had such history. Most important feature in preventing recurrence is complete debridement [28]. The low rates of recurrence and reoperation confirm the completeness of the debridement.

The most important drawback of our study is the high rate of culture negative cases. Although no associations with mortality and morbidity were revealed (Table 1), this high negative culture results necessitates further attention. The most frequently growing bacteria was streptococcus (Table 2) in this group, however, we could not reach to further conclusions due to the high rate of negative cultures. In the literature, 20% to 60% incidence of negative culture results have been reported [14,29]. Even United States reported 69.4% positive culture rates using Nationwide Inpatent Sample. High rate of unknown cultures (30.6%) was explained by coding error [30]. Several factors may cause the lack of isolation of microorganisms from the blood like healed endocarditis, broad range antibiotic therapy, low-virulence germs and poor blood sampling [8]. Also, we did not make serological testing for some rare bacteria which could further lower the culture negative rates. Another important limitation is the retrospective nature of the study. We tried to neutralize this fact by detailed multivariable analyses.

In conclusion, surgery for aortic valve endocarditis was associated with significant mortality. Emergency operation, female gender, postoperative renal failure and LCO are significant risk factors for in-hospital mortality. Operation in the active phase of infection was a risk factor for in-hospital mortality as it constitutes a significant risk factor for postoperative LCO. Male gender was a predictor for recurrence but no risk factors were found to be significant for reoperation. In the surviving patients, risk for recurrence and need for reoperation was low. Long term survival was lower in patients who had mitral valve involvement.

13. Ternhag A, Cederström A, Törner A, Westling K. A nationwide cohort study of mortality risk and long-term prognosis in infective endocarditis in Sweden. PLoS One. 2013;8(7):e67519. [MedLine]

AT: Final control of the study