Type A aortic dissection is a cardiovascular event with the highest acute mortality rate when not treated in time [1]. In natural evolution in its acute phase, patients progress to sudden death in 3% of cases and in the absence of immediate appropriate care, the mortality rate can increase by 1% per hour for the first 24 hours, and 80% die within the first two weeks and 95% in one year [2].

Chronic hypertensive patients, 74 years old in irregular treatment for hypertension, with several passages in units of emergencies due to hypertensive crisis. The patient looked for elective care due to pain in the lumbar region. It was also reported that about three years ago, the patient sought immediate medical treatment due to chest pain during an important hypertensive crisis. The individual was hospitalized for blood pressure control, obtaining remission of pain after blood pressure control.

A physical examination was carried out; the patient had a large pulsatile abdominal mass, approximately 7 cm. Chest and abdominal computed tomography revealed a large abdominal aortic aneurysm, 65 mm (Figure 1) and a thrombosed false lumen in ascending and descending aorta (Figure 2). 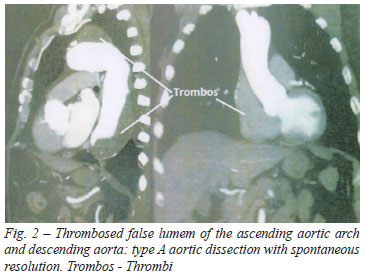 The diagnosis of acute aortic dissection in approximately 38% of cases is not achieved at the first evaluation, and in 28% of cases the diagnosis is made during necropsy [3].

According to the International Registry of Acute Aortic Dissection (IRAD) [4], patients with type A aortic dissection who underwent medical treatment have a mortality rate of 58%, twice as those treated surgically, which was 26%. Also according to the IRAD, mortality was higher in the first seven days, and the most common cause of death was aortic rupture and cardiac tamponade (41.6%). Despite the high hospital mortality of medical treatment in acute aortic dissection, a third of patients who can be discharged are alive after a 3-day follow-up period [5]. Late complications in aortic dissection refer to distal branches obstruction, aneurysms formation and pseudoaneurysms. The abdominal aortic aneurysms are responsible for approximately 12,000 to 15,000 deaths per year in the United States and are a major cause of death in men over 65 years [6].

The DREAM [7], a Dutch multicenter study, showed lower surgical mortality (30 days) with the endovascular procedure, when compared to open surgery; however this lower surgical mortality is lost over the years. The segments 2 and 4 years show that late mortality is similar in both groups, and the most of the deaths in the medium term are not related to aneurysm rupture but the degenerative diseases correlated with atherosclerosis, such as myocardial infarction and cerebrovascular accident, besides cancer.

According to current indications for surgical treatment of aortic diseases, the indication of surgery for abdominal aortic aneurysm is done for symptomatic cases and for those asymptomatic low-risk surgery cases, with a diameter greater than 5.5 cm or greater than 6.0 cm for high-risk patients [8]. Since they have favorable anatomy, endovascular treatment has recommendation grade "A" in these cases. In our environment, Saadi et al. [9] reported a series of 25 patients undergoing endovascular repair of abdominal aortic aneurysm with 96% of patients alive and free of further intervention, up to a 27-month follow-up period.

This case demonstrates a rare event, which is the spontaneous resolution of a type A aortic dissection with progression throughout the descending and abdominal aorta, and also shows the importance of monitoring the anatomic aortic changes with imaging tests, since this disease the distal vessel involvement is very common and often requires additional invasive procedure that can save a patient's life.