InCor-HCFMUSP: Heart Institute of the Clinical Hospital of the School of Medicine, University of São Paulo

Coronary artery bypass grafting (CABG) remains the most cardiovascular procedure performed worldwide [1], therefore the most studied. Over the years, cardiopulmonary bypass (CPB) has allowed to establish CABG as a safe and effective treatment. However, there has always been concern about the influence of CPB in increased morbidity [2,3]. The pioneering spirit made from the 1980s, some groups began to perform Off-Pump Coronary Artery Bypass Grafting (OPCAB) in selected patients [4,5]. Then came controversy regarding the indication of CPB in CABG.

In literature, retrospective studies on large populatipump?ons [6,7] reported a decrease in mortality when CABG was performed without CPB. However, in randomized studies with small populations, the difference in favor of OPCAB was not significant [8,9]. Thus, although there are well-defined criteria for the CABG indication in the treatment of obstructive coronary artery disease, the choice of CPB remains based on the clinical profile of the patient and the surgeon's experience.

Moreover, the risk scores are the best way to transfer scientific knowledge into clinical practice and its applicability in CABG is already certified as a recommendation IIA with level of evidence C [10]. Among these scores, the 2000 Bernstein Parsonnet (2000BP) [11] was adequate in patients undergoing CABG with and without CPB [12], similar to the EuroSCORE (EU) [13], which was also validated for both techniques [14,15]. In Brazil, both scores were also accurate for predicting mortality in CABG, including groups with and without cardiopulmonary bypass [16]. However, other scores, such as the Society of Thoracic Surgeons (STSscore), and more recently, the EuroSCORE II, were not used in this study because they have not yet been validated in our reality.

In theory, scores that predict mortality for both techniques used to treat the same disease can compare and choose preoperatively the best strategy to be applied in specific patients. The objective of the study was to evaluate the impact of EU and 2000BP choice for CPB in CABG.

This prospective, observational study was conducted at the Division of Cardiovascular Surgery, Department of Cardiology, Heart Institute of the Clinical Hospital of the School of Medicine, University of São Paulo (Incor-HCFMUSP). In the sample, 1551 patients underwent CABG sequentially in both modality elective, urgent and emergency care, from May 2008 to July 2010.

We excluded from the study: reoperations associated surgeries (including valve, and other thoracic aorta) and coronary insufficiency alternative procedures (laser, injection of stem cells and other).

Gathering, defining and organizing the data

Data were collected preoperatively and clinical evaluation system for electronic medical records InCor-HCFMUSP (SI3) and stored in a single spreadsheet. This worksheet was adapted to include all the variables described by the model 2000BP and the EU for each patient. Patients were sorted according to risk groups established by the scores and placed in the database made on Excel for this purpose. All patients were followed until hospital discharge. No patient was excluded from analysis due to missing data.

The outcome of interest was in-hospital mortality, defined as death occurring in the time interval between surgery and discharge.

After median sternotomy, the patients were operated with or without the use of CPB, this option by the surgeon in charge of the case. When operated using CPB, this was performed at normothermia or mild hypothermia and arterial cannulation had made in the ascending aorta and the right atrium vein. Cardiac arrest was induced by blood cardioplegia or crystalloid, always using the anterograde. Off-pump patients needed the Octopus device (Medtronic).

For plausibility of the study was initially assessed the applicability of scores (2000BP and EU) in patients with and without CPB sample studied by testing calibration and discrimination. The correlation between both scores in patients with and without CPB was analyzed by the Spearman test and the presence of outliers via box plots. From the directly proportional relationship between the score and the presence of in-hospital death (P <0.001) and there is more on-pump CABG group died (P <0.05) was built a logistic regression model with two variables (score value + presence / absence of CPB) for each risk score. The purpose of the study was to examine whether the same score value (total value represented by the sum of the weights assigned to each variable) the presence of CPB would alter the estimated probability of death.

To better prognostic accuracy cutoff points were obtained by means of receiver operating characteristic curve (ROC). Statistical analysis was performed using the Statistical Package for the Social Sciences (SPSS) version 16.0 for Windows (IBM Corporation Armonk, New York). Abnormal distribution of continuous variables were described as medians. The standard deviation and categorical variables were described by absolute number and percentage. The comparison of categorical variables was performed by chi-square test. The value of P <0.05 was considered significant.

This study was approved by the Ethics Committee for Analysis of Research Projects (CAPPesq), Hospital das Clinicas, School of Medicine, University of São Paulo with the number 1575, which exempted the need for informed consent and informed by the type of design applied. 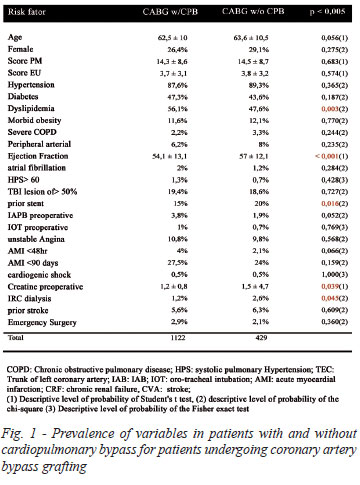 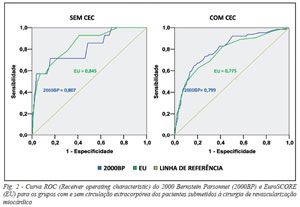 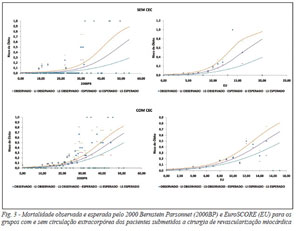 The Spearman correlation between 2000BP and EU was good in both groups, showing a coefficient of 0.657 (P <0.001) in the on-pump group and 0.620 (P <0.001) in the group without CPB. However, the presence of outliers was observed in the group with and without cardiopulmonary bypass when estimated values for both risk scores were very high (Figure 4). 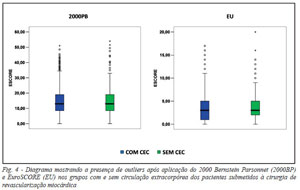 Thus, through these logistic models, made using 2000BP (Figure 5) and EU (Figure 6), one can calculate the probability of death for an overall score value, and for each of the situations with and without cardiopulmonary bypass. 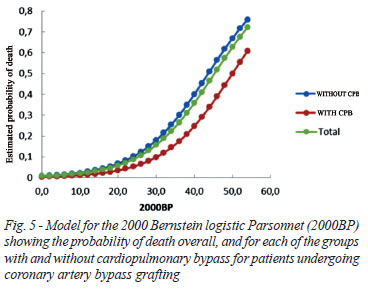 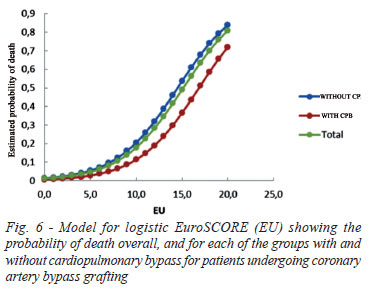 The results of observational studies based on well-structured database (real world) do not overestimate the magnitude of treatment effects compared with randomized trials in the same clinical setting [17,18]. In CABG, retrospective analyzes in large populations describe a significant reduction in morbidity and mortality, especially in-hospital, when performed without CPB [6,7]. In this approach, a multicenter study of the four major EU centers showed benefit in the immediate postoperative period with OPCAB, especially in patients considered at high risk [12]. Furthermore, the use of CPB was an independent predictor of mortality in centers with significant experience in OPCAB. As in this study, without the artifice of randomization, found higher chance of death when patients underwent surgery with CPB compared to surgery without CPB, especially in considered high risk by the scores used. Similarly, a study odd authored by Buffolo et al. [19], revealing the experience of 30 years of OPCAB, demonstrated a significant reduction in hospital mortality outcomes, stroke, severe postoperative complications, length of hospital stay and decreased costs. Also, was described biggest difference in mortality among high-risk patients when operated with or without CPB. This corroborates our analysis, where as the score values increase (worsening of the risk profile of the patient), also increases the risk of death among patients who underwent surgery with or without CPB (Figures 5 and 6).

A demonstration that this technique is reproducible was published by Lima et al. [20], in which 95% of patients undergoing CABG surgery without CPB were. Thus, it is revealed that virtually all patients with indication for CABG are potential candidates for OPCAB. In the study, the authors demonstrate that low-risk patients and patients without comorbidities also benefit from OPCAB, which was confirmed in our analysis, although to a lesser extent (Figure 5 and 6).

On the international scene, recent randomized studies that found differences in favor of OPCAB with regard to in-hospital mortality did not show statistical significance [21,22]. Unfortunately, randomized trials are composed of stable patients at low risk and do not reflect the reality of the current profile of patients referred for CABG. In this sense, the last work of the greatest impact was published by Lamy et al. [23], in which 4752 patients from 79 centers in 19 countries were randomized. In the results, no significant difference, up to 30 days between CABG with and without CPB, on death, myocardial infarction, stroke and renal dysfunction requiring dialysis. However, OPCAB resulted in lower rates of transfusion, reoperation for bleeding, respiratory complications and acute renal failure, although the increased risk of early revascularization. Nationally, a randomized, multicenter published by Gerola et al. [24] almost a decade ago, had no significant difference was found within 30 days, between CABG with and without CPB in morbidity and mortality in low-risk patients.

As we can see, these studies were not considered high-risk patients with significant comorbidities and, unlike the patients included in our sample (the real world).

Recently, in non-randomized study, Cantero et al. [25] reported a hospital mortality of 4.3% and 4.7%, respectively, in the group without CPB and CPB (P = 0.92). However, the off-pump patients had fewer complications compared to perioperative infarction (P = 0.02) and the use of intra-aortic balloon (P = 0.01).

Moreover, the risk scores are predictive tools that can help patients and health professionals in decision making by informing about the likely risk of complications or death. In this setting, two of the most commonly performed procedures in the interventional cardiology world are influenced by risk scores. The Syntax score was developed from database to examine how best revascularization (CABG or PCI), based on the angiographic characteristics [26]. Moreover, the score Wilkins was created to orient the cases of mitral stenosis which would be better handled by conventional surgery as compared to balloon valvuloplasty [27].

Thus, in InCor-HCFMUSP, held after the statistical validation of models 2000BP and EU [28], even in patients with acute myocardial infarction [29], was of clinical interest and practical know the score (cutoff) that would have better prognostic accuracy to define which patients would benefit most from OPCAB those who could be safely treated using CPB.

To do so, he had to be confirmed the good performance of risk scores for both patients with and without CPB (Figure 2), and good correlation between both models for each patient sample. However, as is expected for samples in the real world, outliers are described for scores 2000BP and EU in our study, confirming a truth about the stability of risk scores: the loss of calibration in the evaluation of high-risk patients (Figure 4).

Importantly, even though the subjective choice of the current CPB in CABG, it is supported in patients with low ejection fraction and should be avoided in patients with severe renal impairment. These data are consistent with that observed in our study (Figure 1).

Surely, this analysis is more objective evidence and practice, from the look of the risk scores, which justifies the preference for not using CPB in CABG in patients considered high risk by the scores 2000BP and EU.

In summary, randomized controlled trials have found in the short term, statistically significant reductions in morbidity and mortality demonstrated in observational studies. These discrepancies may be due to differences in patient selection and study methodology. Future studies should focus on improving research methodology, recruiting high-risk patients and data collection in the long term.

Finally, it is important to reiterate that the current medical treatment must be integrated into individual clinical experience and the best available external evidence, therefore, risk scores cannot continue to be neglected [31].

The scores 2000BP and EU showed good performance in the evaluation of patients undergoing CABG with and without CPB. In the real world, patients with 2000BP> 17.75 and EU > 4.5 show, respectively, 7.4 and 5.4 times greater chance of death when operated with CPB regarding OPCAB.