JACC: Journal of the American College of Cardiology

In the last Brazilian Congress of Cardiology, there was a round table dedicated to the Brazilian Archives of Cardiology (BAC). The interesting initiative of the Editor, Professor. Luiz Felipe Pinho Moreira, was addressing the varied lines of articles published in the triennium 2010-2013 in its co-editors' view. The idea was that the presentations gave rise to editorials that, in analytical style, provide the reader with a sectoral analysis of co-auditorships. In the case of our presentation, we adopted a strategy based on three topics: 1) Establishing a parallel between the BAC editorial and two journals devoted to cardiology clinics, 2) assessing the content based on published articles, and 3) searching possible evidence of impact of the creation of the Brazilian Journal of Cardiovascular Surgery (BJCVS) on the publication of articles in cardiac surgery at the Brazilian Archives of Cardiology. 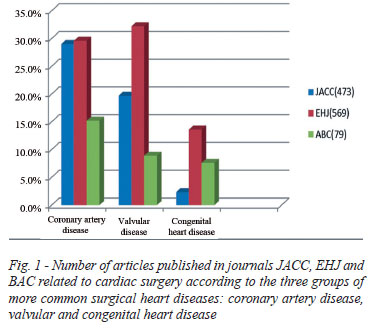 For this assessment we adopted a systematic similarly based on the three most common cardiac surgery and heart transplantation. But regardless of any editorial strategy, with large margin of certainty, the publication of greatest impact was the publication of analytical evolution of cardiovascular surgery at the Heart Institute based on impressive institutional experience and 71,305 surgeries between 1984 and 2007, considering the trend of the main procedures and mortality rates. The study shows the following results: 1) The number of CABG surgeries, which in the 1980s had an average of 856/year increased to about 1.106/year, 2) heart valve procedures increased from 400 to 597 operations/year, an increase of 36.7% compared to the 1990s, and 3) the correction of congenital heart disease also had a significant increase of 50.8% over the last decade. The average overall mortality, which at the beginning was 7.5%, decreased to 7%, and 4.9% among elective procedures [1]. This article deserved a brilliant editorial, which highlights the numbers presented, but above all draws a parallel with the historical evolution of Brazilian heart surgery. The title of the editorial speaks for itself: "Evolution of Cardiovascular Surgery. The Brazilian Saga. A History of Work, Success and Pioneering"[2].

In relation to coronary artery bypass grafting, two aspects were addressed: surgery in octogenarians and prospecting results between surgery with and without cardiopulmonary bypass (CPB).

We studied 140 consecutive cases between January 2002 and December 2007. Patients were on average 82.5 ± 2.2 years (80-89), and 55.7% were male. In the sample, 72.9% were hypertensive, 26.4% had diabetes, 65.7% had severe lesions in three or more vessels and 28.6% in the left main coronary artery. Associated surgery was present in 35.7% of patients, and aortic valve in 26.4% and mitral in 5.6%. These results led to the conclusion that bypass surgery in octogenarians is associated with greater morbidity and mortality than in younger patients, which, however, does not preclude intervention if indicated by the clinical condition [3].

A meta-analysis of available randomized trials demonstrated that off-pump CABG is associated with lower mortality rates and lower risk of cerebrovascular accident (CVA). However, this apparent clinical superiority compared to CPB in CABG surgery still needs to be demonstrated in particular clinical contexts. Both techniques are evolving and have advantages and disadvantages in certain subgroups of patients in whom the risks and benefits of both approaches need to be considered, so that the choice of strategy to allow the patient to maximize the long-term benefit and minimize risks in the short-term [4].

Since the review published in BAC was quite cautious, we opted for the inclusion of the concepts derived from recent meta-analysis published by the Cochrane Database Systematic Review. This systematic review did not observe any significant benefit of OPCAB surgery compared to surgery with CPB, considering the operative mortality. In contrast, we observed better survival in the group undergoing surgery with CPB. Based on this evidence, the CABG with CPB should be the standard procedure. The surgery without CPB should be used when there is contraindication to aortic cannulation [5].

A text of my own illustrates a view of the carcinoid valvulopathy as a puzzle and a challenge of modern cardiology. Why puzzle and challenge? Some data would be still enigmatic: 1) the unknown role of serotonin in valvular disease, 2) against the hypothesis of the presence of IAC, as a condition for left valvulopathies, there are cases approaching left valvulopathy without the presence of such communication, 3) the natural history of the disease is still unclear and the disease could be underestimated. Some highlights "challenges" would be: 1) early diagnosis based on imaging examination and more accurate biomarkers, 2) what is the optimal surgical timing? 3) although there is a preference for bioprostheses, would possible treatments that reversed the binomial term graft/patient survival arise? 4) does the association between repair and valve exchanges make sense? It is noteworthy that the increasing number of publications on carcinoid heart disease can provide it characteristic of emerging disease, deserving more attention to basic researchers, clinicians and surgeons [6].

A study aimed to assess the feasibility and effects of anatomic repair of Ebstein's anomaly with the cone technique in the clinical evolution of patients, the function of the tricuspid valve and right ventricular morphology. This is an original surgical technique, proposed by the authors in 1989, called cone reconstruction of the tricuspid valve, aimed at rebuilding valve like normal. We compared the clinical, radiological and echocardiographic data obtained in the preoperative, immediate postoperative and long-term of 52 consecutive patients with a mean age of 18.5 ± 13.8 years, who underwent cone technique. The cone technique showed low hospital mortality, correcting tricuspid insufficiency effectively and in a lasting way, with the restoration of the right ventricle functional area, allowing the heart reverse remodeling and clinical improvement in most patients in the long-term [7]. The relevance of this issue prompted an editorial which highlights three important points: 1) the introduction of the cone technique, as it is called, immediately becomes an important technical advance of considerable magnitude and breath in the general management of Ebstein's anomaly, 2) the difficulty with this cone technique is still expressed in its non-reproducibility and use in other medical centers, thus it is believed that hereafter it may be performed more, stimulated by the good results demonstrated already in sufficient period of long-term outcome, and 3) one aspect that should be further emphasized is that the technique could be performed on younger patients than that currently performed (18.5 ± 13.8 years), in order to prevent unfavorable evolutionary adverse aspects, as the marked right ventricular dilatation and subsequent ventricular dysfunction [8].

It is worth mentioning a study proposed to identify the risk factors associated with dysfunction and pulmonary homograft failure in children undergoing expansion of the right ventricular outflow tract. The final sample of 75 patients with a median age at surgery of 22 months, ranging from 1 to 157 months, showed 13 (17%) patients who developed homograft dysfunction, characterized by severe pulmonary stenosis or insufficiency. The authors concluded that the pulmonary homograft of size smaller than 21 mm and the pulmonary valve inadequate for the patient's age and weight are factors for graft dysfunction [9].

Still in the field of congenital heart disease, deserves special mention the growing individualized interest in adult congenital heart disease, and who should be responsible for operating them: the pediatric surgeon or adults' surgeon? Two articles were published on the subject. One aimed to describe the profile of patients who had undergone surgery over the age of 16 years and assessing the risk factors predictive of hospital mortality. One thousand five hundred and twenty patients (mean age 27 ± 13 years) underwent surgery between January 1986 and December 2010. We performed descriptive analysis of the epidemiological profile of the population studied and analysis of risk factors for hospital mortality, considering the complexity score, the year in which the surgery was performed, a procedure performed by pediatric surgeon or not and the presence of reoperation. It was also observed an increasing number of patients aged over 16 years and that, despite the large number of simple cases, the most complex were referred to pediatric surgeons, who had lower mortality, especially in recent years [10].

The other study aimed to describe the basic clinical profile of adults with congenital heart disease receiving care at a tertiary center. In the study, the most patients were treated invasively, residents in the region and most aged below 40 years. Defects such as atrial septal defect (ASD), ventricular septal defect (VSD) and pulmonary stenosis predominated in the untreated group, while in the treated, most had undergone surgical correction of ASD, tetralogy of Fallot, aortic coarctation and VSD. Hypertension and arrhythmias were significant in both groups, and large variety of other comorbidities was also recorded [11].

A study aimed to compare the effects of sildenafil and sodium nitroprusside on hemodynamic, echocardiographic, and neurohormonal variables during lung reactivity test. Sildenafil and nitroprusside are vasodilators that reduce, significantly, pulmonary hypertension and cardiac geometry, besides improving biventricular function. Nitroprusside, unlike sildenafil, was associated with systemic hypotension and worsening of venous oxygen saturation [12].

A well-designed meta-analysis concludes that the bicaval and total orthotopic heart transplants are better in terms of prognosis than the biatrial. Therefore, the indication of biatrial technique for transplantation should be the exception and not the rule [13].

After the arbitrary evidence above described emerged the curiosity if the publication of BJCVS caused some impact on the profile of publications with respect to cardiac surgery issues in BAC. Querying MEDLINE in the triennium 1983-1985 (before BJCVS), the following numbers were calculated: a total of 615 studies, 58 (9.43%) were about the heart surgery. 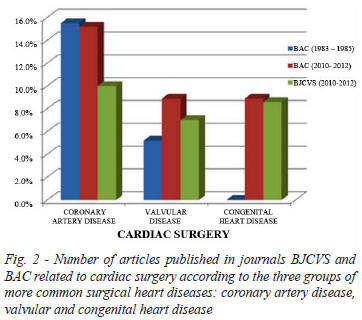 As a final comment, the studies published in BAC may be considered compatible with the orientation of disseminating information that are of mutual interest among clinicians and surgeons.