Aortic pseudoaneurysm as cause of superior vena cava syndrome: a case report

The superior vena cava syndrome represents the set of signs and symptoms resulting from obstruction of superior vena cava. The syndrome has as main causes malignant tumors such as bronchogenic carcinoma, lymphoma and mediastinal metastases. Lung cancer accounts for 80% of cases, mediastinal lymphomas by 15% and 5% correspond to other causes. This case report aims to present an unusual case of this syndrome, which occurred in a male patient after penetrating wound in the chest, which developed a pseudoaneurysm of the aortic arch and superior vena cava syndrome.

The superior vena cava syndrome (SVCS) is characterized by a set of clinical signs and symptoms resulting from obstruction of that vessel. This syndrome is presented in various ways, according to the severity of the obstruction and its cause. In general, a complete obstruction caused by neoplastic disease evolves rapidly to death, while that resulting from benign pathologies can even be asymptomatic [1].

The SVCS presents various clinical signs and symptoms, such as headache, facial flushing, edema and the development of chest collateral circulation. Other commonly reported symptoms are dyspnea on exertion, orthopnea, dizziness and visual disturbances [1-3].

The superior vena cava (SVC) obstruction is mainly related to malignant tumor processes such as bronchogenic carcinoma, lymphoma and mediastinal metastasis. As nonmalignant causes, we can mention tumor diseases as teratoma and thymoma, radiation, mediastinal fibrosis, pneumothorax and thoracic aortic aneurysm, especially in the aortic arch and ascending portion. Several other conditions are related to SVCS, since any factor that causes a compression of the SVC is a possible etiology, including transvenous pacing and aortic pseudoaneurysm [1-5].

This case report aims to describe an unusual presentation of SVCS, occurred in a male patient after penetrating chest injury resulting in pseudoaneurysm of the aortic arch and SVCS.

A 25-year-old male patientpatient was assisted at Gaspar Vianna Foundation Clinical Hospital (FHCGV), complaining of "chest pain". Victim of stab wound (SW) with more than 48 hours of evolution, presenting cutting-perforating injuries sutured in the sternal region and right subclavian, with local pain and bruising. The patient also complained of pain during inspiration.

The patient was in good general condition according to a physical examination, conscious and oriented in time and space, normal coloured, hydrated, eupneic, anicteric, presenting cyanosis, tachycardia, blood pressure within normal limits, jugular stasis with bruising in the right subclavian region and swelling in the upper limbs, chest and face.

The patient underwent cardiac monitoring, oxygen delivery via nasal catheter and chest radiograph was performed. After radiological analysis, which showed widening of the mediastinum, Doppler echocardiography was requested for better diagnosis.

The echocardiogram reported technical difficulties due to local edema, yet revealing mild diastolic restriction, with an ejection fraction of 73%, normal vessel diameter and cardiac chambers, as well as the aortic arch and descending aorta without changes.

Because of this result and no availability at the FHCGV of a functioning CT scanner, an arteriography and a venography were requested.

On an arteriography (Figure 1A) and venography (Figure 1B), a pseudoaneurysm was visualized in the anterior and lateral aortic arch near the origin of the brachiocephalic trunk, compressing the SVC, confirming the diagnosis of posttraumatic SVCS. 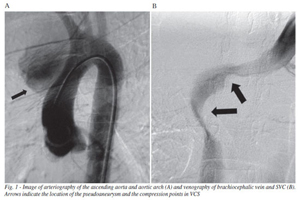 With the confirmation of diagnosis and because of the high likelihood of rupture of the pseudoaneurysm at the opening, the patient was referred for surgical treatment, where we performed a partial sternal thoracotomy for cardiopulmonary bypass (CPB), opting for right atrium and right femoral artery cannulation. After performing the installation of CPB, thoracotomy was completed, which caused the rupture of the pseudoaneurysm which was quickly controlled the bleeding (Figure 2). 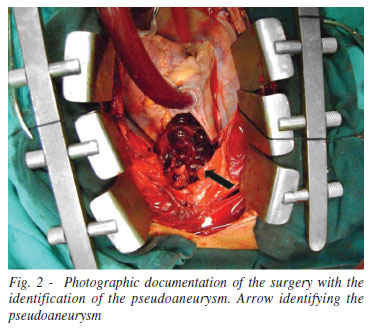 With the identification of the orifice of approximately two inches, located in the aortic arch, close to the innominate artery, suture was performed with simple reinforcement of bovine pericardium with no need of circulatory arrest. Later, usual procedures were performed for the weaning from CPB and closure of the patient. With the confirmation of the diagnosis, there was no need for histopathology.

After surgery, the patient progressed satisfactorily and was discharged on the ninth postoperative day.

The majority of patients with SVCS presents aged 50 to 70 years. Age is related to the primary cause of the syndrome, which are the malignant tumor processes. Children can also be affected, being caused mainly by non-Hodgkins lymphoma or benign causes [3].

As already reported, the symptoms of SVCS can include a feeling of heaviness in the head, cough and dyspnea. Clinical findings may include facial and neck edema, presence of collateral circulation on the trunk, upper extremities and neck, facial flushing, cyanosis, stridor, anxiety and neurological signs may be present [1,3]. On physical examination, the patient had presented jugular stasis and swelling of arms, chest and face, signs that corroborate the suspicion of this syndrome, but as noted, the patient had a history of SW for more than 48 hours, this time was not enough so that the patient could present collateral circulation, since collateral vessels takes several weeks to accommodate blood flow diverted from the VCS. Thus, the presence of collateral circulation is not common in cases of SVCS with rapid evolution [6].

After completion of the examination which showed widening of the mediastinum on chest radiographs and noncompletion of diagnosis by echocardiography, there would be the need to perform a chest CT angiography whose advantage would include a shorter time to image acquisition when compared to magnetic resonance angiography (MRA). The CTA is essential for assessment of SVCS, by clearly identifying the cause of the syndrome, the extent of disease, place and degree of venous obstruction [2]. Such resources were unavailable in the service in question, so we opted for realization of venography and arteriography, which revealed the injury (pseudoaneurysm) located in the aorta close to the innominate artery and the consequent compression of the SVC.

In SVCS, the recognition of the risk of life and symptoms suggestive of airway involvement or cerebral edema is essential to reduce the risks of complications. If there is evidence of airway compromise, as stridor, associated with findings such as laryngeal edema or tracheal obstruction tomography abnormalities, the patient should be treated as a medical emergency, requiring interventions for airway protection, such as, for example, the endotracheal tube [1].

Treatment of SVCS is based on etiology. The patient had an aortic pseudoaneurysm, requiring immediate treatment, since traumatic rupture of the thoracic aorta is a surgical emergency, often fatal in the first few hours after injury [7].

The use of an endovascular stent constitutes one option of treatment for less invasive aortic diseases and may be considered an alternative to conventional surgical treatment. The advantages of endovascular treatment compared to surgical correction of aortic diseases include: avoiding thoracotomy, cardiopulmonary bypass and minimizing the complications of an open procedure [7].

In the treatment of SVCS, angioplasty with placement of stent is currently the method that provides faster relief of SVC obstruction. After stent placement, the headache is immediately relieved, facial edema in 24 hours, while the swelling of the upper limbs and trunk is resolved within 72 hours, on average. To avoid thrombogenic complications, most patients perform prophylaxis with anticoagulants and antiplatelet agents [3, 8].