Coronary artery bypass graft (CABG) without the use of extracorporeal circulation (EC) has been used in order to reduce complications related to the inflammatory response to EC, but the literature has shown controversial results regarding the superiority of this technique [1-9].

In 2009, ROOBY TRIAL [10] compared the clinical and angiographic outcomes of CABG with and without EC and concluded that only the anastomoses of the left internal thoracic artery (LITA) made in the anterior wall of the heart had similar patency rates after one-year follow-up period, while the saphenous vein grafts to other walls had lower results in off-pump technique.

The Transit-time flowmetry (TTF) is the most common technique used for immediate intraoperative assessment of graft patency. The TTF measures the average flow in the graft (MGF), and provides a flow curve and derived variables such as the pulsatility index (PI) and the percentage of diastolic filling (DF). This technology allows quantification of the flow regardless of the size and shape of the vessel or use of the angle sensor [11-13]. However, there are few studies comparing the fluxometric data in the literature when performing on-pump or off-pump CABG.

The objective of this study was to compare the fluxometric variables of internal thoracic artery grafts to left anterior descending artery (LADA) in patients undergoing CABG with and without EC.

This study was conducted at Bahia Foundation of Cardiology (FBC) by only one surgical team. After the study was approved by the Ethics Committee of the FBC, between March and September 2010, 35 consecutive patients were retrospectively analyzed, not randomized, patients with coronary artery disease who underwent CABG.

We excluded patients undergoing previous heart surgery that required associated intraoperative procedures, emergency surgery or those who required use of intra-aortic balloon. 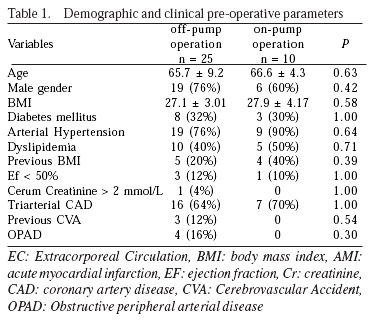 All patients underwent CABG through median sternotomy. The LITA was dissected with preservation of vascular pedicle and wrapped with gauze soaked in papaverine.

In the group undergoing CABG with EC, patients were heparinized with 400 IU / kg to maintain an ACT (activated clotting time) > 480 seconds. The installation of EC was performed in standard mode. The patients were operated on with hypothermia at 32ºC, and anoxic arrest was performed by infusion of cold blood cardioplegia which was injected into the aortic root. The anastomosis of the LITA in the ADA was the last to be performed. For other coronary branches, when indicated, saphenous vein grafts were prepared. The proximal anastomoses were performed with side clamping of the aorta. Finally, the heparin was reversed with the infusion of 1mg protamine sulfate per 100 IU heparin.

In the group undergoing off-pump CABG, patients were heparinized with 300 IU / kg to maintain an ACT> 400s. Exposure of coronary arteries was obtained with use of the technique described by Lee et al. [14]. The segmental stabilization myocardium was obtained with Octopus 3 tissue stabilizer (Medtronic Inc., Minneapolis, MN). The visualization was facilitated by the use of CO2 jet. Coronary flow was maintained through the use of intracoronary shunts (Medtronic Inc., Minneapolis, MN, USA), compatible with the size of the vessel diameter. The anastomosis of the LITA in ADA was always the first one to be performed. The proximal anastomoses, when used saphenous vein grafts to other coronary branches, were performed by aortic-side clamping. In the end, heparin was reversed with the infusion of 1mg protamine sulfate per 100 IU of heparin.

The use of this technique was described by D'FMTT AOI et al. [13]. Transducers from Medi Stim brand were used (Oslo, Norway) and sterilized with ethylene oxide. A segment measuring approximately 2 cm of the LITA was skeletonized in its middle third to facilitate coupling with the transducer. Ultrasound gel was applied in the lumen of the probe, prior to its placement in the graft to optimize data collection. The electrocardiographic and flow curves were displayed in real time, on the Medi Stim BF 2004 display console (Figure 1). 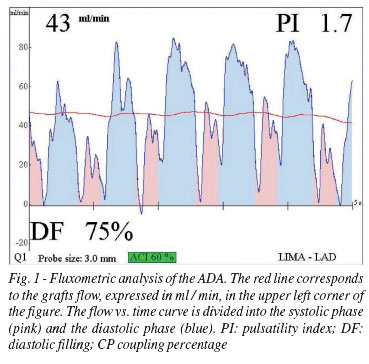 The median graft flow (MGF), pulsatility index (PI) and the percentage of diastolic filling (DF) were obtained simultaneously, immediately before closing the chest, maintaining the mean arterial pressure between 70 mmHg and 100 mmHg with the use of vasoactive drugs.

The median, maximum and minimum graft flows were measured in milliliters per minute. The PI was obtained by dividing the difference between the minimum and maximum by the median graft flow.

Diastolic filling was defined as the percentage of the total graft flow occurred during diastole, achieved through real-time correlation with electrocardiographic curve and expressed as a percentage.

The groups studied were similar regarding demographic and clinical characteristics (Table 1). In 35 operated patients, 80 grafts were used, and among them, 35 LITA. Out of the 80 grafts used, 39 were intended to the revascularization of the anterior wall, 21 for the side wall and 20 for the inferior wall. There were no deaths, myocardial infarction or need for percutaneous interventions during a 30-day postoperative period. The average number of distal anastomoses was 2.3 ± 0, 8 per patient in the group without EC and 2.2 ± 0.6 in the group with EC, showing no significant difference (P = 0.10). The off-pump group showed a smaller proportion of patients with triple vessel pattern, but without any statistically significant difference. There was no need to redo the anastomosis in this series. 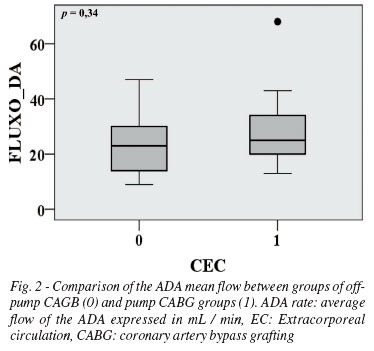 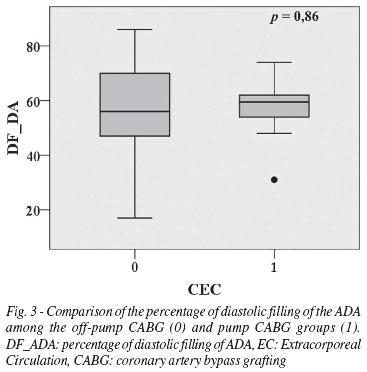 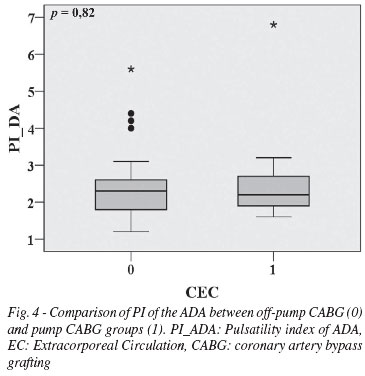 The use of EC produces a static and bloodless surgical field, allowing a safe anastomonic confection. However, this feature is identified as a major determinant of perioperative morbidity, length of stay and hospital costs [10,15]. As a result, off-pump CABG was reintroduced in surgical practice and its use encouraged by the availability of efficient epicardial stabilizers [16,17]. In Brazil, Lima et al. [14] reported the experience of over three thousand patients operated without EC, showing low morbimortality rates during hospitalization.

In recent studies comparing the two methods in the treatment of patients with multivessel disease, patients operated without EC tended to receive fewer grafts than planned, and the rates of postoperative patency of saphenous vein grafts made in the lateral and inferior walls of the heart were significantly lower. In 2009, Shroyer et al. [10] demonstrated patency rates of 95% of the anastomosis of the LITA-ADA, with no statistically significant difference between patients operated with and without EC. Similar results were obtained in 2004 by Widimisky et al. [16], who reported patency rates of 91% in both groups, and by Puskas et al. [18], who reported a 94.1% patency in the off-pump group, and 98.1% in the on-pump group.

The gold standard for evaluating the patency of anastomoses is the coronary angiography, which can also obtain other variables such as coronary flow using intracoronary ultrasound, but the need for hybrid operating rooms, familiarity with the method, use of nephrotoxic contrast agents and increased surgical time allow the application of this method for the postoperative period [19]. In the intraoperative period, methods such as thermal angiography and Doppler measurements are technically difficult and present a significant variation of results. In clinical practice, two methods remain as the most widely used nowadays in the intraoperative verification of anastomotic patency: an intraoperative fluorescence and transit-time flowmetry (TTF) [11].

The present study was designed to compare intraoperative fluxometric values of LITA-ADA grafts by TTF in a homogeneous population of consecutive patients operated on with or without EC by a single surgical team.

This method proves to be quite sensitive in detecting early anastomoses with moderate degree of stenosis, and its sensitivity is increased when the data are analyzed individually, taking into account the coronary arteries patterns [13].

Flow values measured by TTF in groups of patients operated with and without EC were reported in previous studies. Schmitz et al. [20] reported graft flow values of LITA-ADA in the off-pump group, with an average of 27.92 ml / min, values which are smaller than those observed in the on-pump group, in which the average value was 40.25 ± 22.92 ml / min. This difference was attributed to secondary coronary vasodilation to acidosis during EC and less need for use of noradrenaline in this group. In this study, no difference was observed between the groups, similar to findings reported by Hassanein et al. [21] and Leong et al. [12]. The median graft flow of the LITA-ADA recorded by these authors was 42.9 ± 26.0 ml / min and 35.0 ± 24.4 ml / min in the on-pump group and 41.6 ± 25.3 ml / min and 39.6 ± 21.9 ml / min in the off-pump group, respectively. In 2004, Kjaergard et al. [15] found flow values lower than those found in the studies cited above, without any statistically significant difference between groups, values that were similar to those found in our study. These findings may be related to the measurement variability inherent in the method.

The PI is a dynamic parameter [13] that estimates the vascular resistance to the graft flow. In general, values above five are considered unsatisfactory and may be related to technical problems for anastomosis [11]. In the present study, we found PI mean values of 2.68 ± 1.52 in the onpump group and 2.48 ± 1.05 in the off-pump group, without any statistically significant difference between them. In two cases, PI values> 5.0 were found, and due to the characteristic flow curve and the quality of the distal coronary bed, anastomosis was not redone. The PI is influenced by any factor that increases the flow resistance in patients with bad distal bed or with coronary microvascular disease [11]. Hassanein et al. [21] found values of PI of 1.98 ± 1.08 in the on-pump group and 2.06 ± 1.26 in the off-pump group, with no difference between groups, values similar to the findings in this study.

In Brazil, there are no publications related to the use of TTF for evaluation of coronary grafts. Castro Neto et al. [19] evaluated blood flow in composite grafts of the LITA with radial artery using intracoronary ultrasound in the postoperative period, showing no statistical difference of the total flow offered to the territory of the left coronary artery revascularized with these grafts, when compared to single grafts. In 2004, Lobo Filho et al. [22] evaluated Y-composite LITA grafts with saphenous vein, using transthoracic echocardiography with Doppler, placing the transducer in the left supraclavicular fossa demonstrating an increased flow of the LITA graft compound, which may represent a positive remodeling during the postoperative period.

The flow values obtained using the TTF are influenced by several factors such as blood pressure, hematocrit and graft diameter. Two factors are particularly relevant: the native coronary artery flow, related to your degree of stenosis, and the resistance of the distal vascular bed [11]. Moreover, the PI is a good indicator of the flow pattern and, consequently, the anastomosis quality, and the possible presence of this technical problem during its making increases in the presence of PI values above 5. It is relevant to emphasize that, the assessment of this variable should be individualized, taking into consideration the quality of the distal vascular bed, and the presence of electrocardiographic changes and hemodynamic instability in the decision to redo the anastomosis [21].

The present study demonstrated through fluxometric data that there was no difference in the quality of the anastomosis between the LITA-ADA groups. This finding may be related to a greater accessibility of ADA compared to the sidewall and inferior heart arteries, regardless of the technique used, thereby reproducing the results of an onpump surgery. We believe that cases of isolated intervention in ADA are in the best indication for off-pump CABG.

This is an observational study with a small number of patients in the group with EC. Moreover, considering that the two groups were not randomized, it may have been a selection bias affecting the results. This study describes only graft flows in the operating room, thus the results may not necessarily reflect the flow rates in the long term, in both groups. Nevertheless, it is a pioneer study in Brazil, with fluxometric comparative data analysis in patients undergoing both on-pump and off-pump CABG.

There was no difference in the fluxometric parameters (FME, and IP ED) found at the anastomosis between the left internal thoracic artery and left anterior descending artery in patients undergoing CABG with and without CPB.