Currently, a total of 275.000 cardiac valve replacement surgeries are carried out worldwide [1], with operative mortality ranging from 1 to 15% [2,3]. The reported mortality in Brazil is 8.9% for heart valve surgeries, according to administrative register from DATASUS [4].

Guaragna et al. [5] recently proposed a Brazilian risk score for prediction of surgical risk after heart valve surgery - we baptized the model as GuaragnaSCORE. However, several studies show that risk prediction scores tend to have inferior performance when applied to different groups of patients which have been used to development of the original model [6]. So the external assessment in population of patients with new data from other institutions is always important for the score has wide clinical application [7-9]. Previously, we tested EuroSCORE in coronary artery bypass graft (CABG) surgery at our institution, and this proved to be a simple and objective index, revealing a discriminating satisfactory postoperative outcome, so we showed the importance of validating risk prediction models in local institutions in order to verify its applicability [8].

The objective of this study is to evaluate the ability of the score of Guaragna et al. [5] in predicting surgical risk in our institution, specifically in the group undergoing heart valve surgery.

After approval by the ethics committee, in accordance with Resolution 196/96 (National Board of Health - Ministry of Health - Brazil) [10,11], we reviewed the records of patients undergoing consecutive isolated heart valve surgery (replacement or repair) or combined with CABG surgery at the Division of Cardiovascular Surgery of Pronto Socorro Cardiológico de Pernambuco (PROCAPE), Recife, PE, Brazil, from May 2007 to December 2010. We excluded the following: patients whose records did not contain the necessary data concerning the variables to be studied; patients undergoing surgery for tricuspid and/or pulmonary valves (when isolated, due to small number of patients undergoing these procedures); age < 18 years.

It was a retrospective study of exposed and nonexposed to certain factors (independent variables) with outcome (dependent variable) followed by assessment of a model (the score of Guaragna et al. [5]).

The dependent variable was perioperative death (considered in the transoperative period and throughout the entire hospitalization period).

Each patient was evaluated for the presence or absence of the nine risk factors established by Guaragna et al. [5], respecting the definition of each of them and giving them the correct score (Table 1). Depending on the final score, each patient was placed in one of the five risk groups (Table 2). 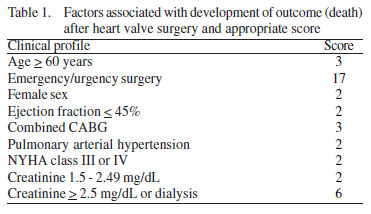 Data were analyzed using percentage and descriptive statistics measures. The following tests were used: chisquare test or Fisher's exact test (as appropriate, for nonparametric variables). In the study of univariate association between categorical variables, the values of the odds ratio (OR) and a confidence interval (CI) for this parameter with a reliability of 95% were obtained.

Multivariate analysis was adjusted to a logistic regression model to explain the proportion of patients who died that were significantly associated to the level of 5% (P <0.05) by a backward elimination procedure. The calibration of multivariate model was evaluated by the Hosmer-Lemeshow goodness-of-fit test.

The level of significance in the decision of the statistical tests was 5%. The program used for data entry and retrieval of statistical calculations was SPSS (Statistical Package for Social Sciences) version 15.0.

Incidence of death and population characteristics

Taking into account the inclusion and exclusion criteria, we analyzed 491 patients undergoing heart valve surgery with a mean age of 44.6 ± 17.9 years, being 51.5% female. In-hospital death occurred in 15.1% (n=74) patients.

Analyzing the variables proposed in the score with the occurrence of death, we observed that all of them were significantly associated with this complication (Figure 1). 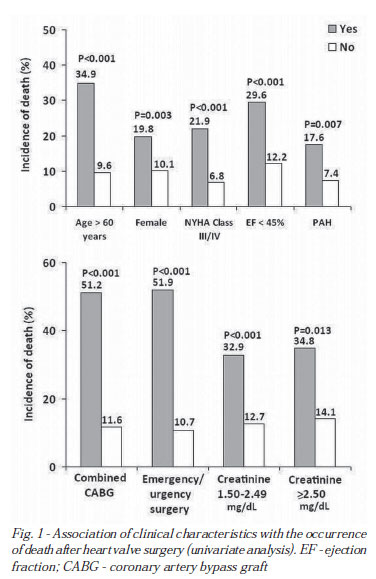 Applying a multivariate logistic regression model, associations of clinical variables of the score remained strongly associated with death (Table 3). The model was well accepted (P<0.001) and showed a degree of explanation of 88.4%. The Hosmer-Lemeshow goodness-of-fit was also well accepted (P=0.811), indicating a good model calibration.

Analysis of the score and prediction of death 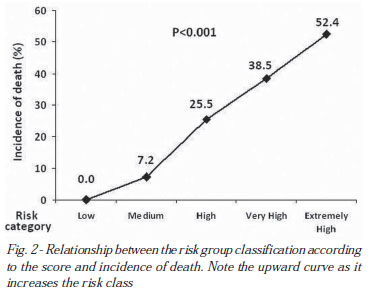 Accuracy of the proposed risk score

According to the results presented in the area under the ROC curve (overall capacity of the measure used to discriminate individuals who died or survived), measured by 78.1%, the score shown a good measure to identify patients with risk of death (Figure 3). 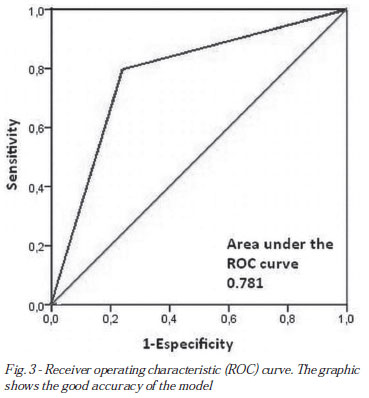 We also observed that combined CABG is an independent predictor of death in patients undergoing heart valve surgery. We think it happens for two reasons. First, many studies show that combination of two or more concomitant cardiac surgeries increases the risk of death [5,8,9]. Second, the combination with CABG increases time of cardiopulmonary bypass (CPB). Many studies showed the impact of CPB in increased rates of morbidity and mortality in various situations related to cardiac surgery [15,16].

We also observed that pulmonary arterial hypertension is an independent predictor of death in patients undergoing heart valve surgery. Roques el al. [17] demonstrated the importance of pulmonary hypertension on outcomes during the development of EuroSCORE.

We also observed that NYHA class III/IV is an independent predictor of death in patients undergoing heart valve surgery. Despite this evidence, we must remember that it is precisely these patients (patients more symptomatic) who benefit from more aggressive strategies (surgical treatment) compared with medical therapy [18].

We also observed that high levels of creatinine is an independent predictor of death in patients undergoing heart valve surgery. Volkmann et al. [19] showed that, beyond patients with overt renal insufficiency, patients with hidden renal dysfunction (normal creatinine, but with decreased glomerular filtration rate) had a higher incidence of death after cardiac surgery, demonstrating the impact of renal disease in outcomes.

It is worth mentioning that other scores have been tested in cardiac surgery, although not specifically in heart valve surgery. Recently, Mejía et al. [9] tested the EuroSCORE and 2000 Parsonnet-Bernstein in Heart Institute of the University of São Paulo Clinics Hospital (InCor-USP). They showed that the similarity between both observed and expected mortality by the scores allows them to confirm that the values given by the scores to the various risk factors could be applied to their patients. Therefore, they concluded that both models were similar and adequate in predicting the mortality of patients undergoing CABG, heart valve, and associated surgeries at their institution. The GuaragnaSCORE stands out in the sense of having been created specifically for heart valve surgery.

The GuaragnaSCORE presented a good accuracy, since the discrimination power of the model in this study according to the ROC curve was 78.1%.

The risk score proposed by Guaragna et al. [5] seems to be a good model for prediction of death in patients undergoing heart valve surgery.