Objective: To demonstrate the experience with the reconstruction of the chest wall utilizing metal brace to reduce the tension in the suture lines of myocutaneous flap in cases of mediastinitis. Methods: From July 2001 to February 2006, 1389 heart surgeries were performed in our institution of which eight (0.6%) developed mediastinitis. Seven were male and the mean age was 56.7 years. The risk factors for infection were diabetes and obesity in seven and malnutrition in one case. Seven patients had been undergone CABG and one repair of a congenital heart disease. The chest wall reconstruction consisted of percutaneous insertion of Kirshner wires parallel to the edges of the wound for anchoring of sutures to the muscular plane in order to allow the reduction of tension in the free edges of the wound and subsequent closure of the subcutaneous tissue and skin. Results: There was one death in the immediate postoperative due to arrhythmia and one late death secondary to sepsis. The remaining patients presented satisfactory postoperative course with good healing of the wound after the removal of the metal braces on the 21th postoperative day and in the follow-up of 6 to 54 months. Conclusion: The reconstruction of the chest wall utilizing temporary metal braces showed to be a safe and effective procedure with good aesthetic and functional outcomes in this group of patients.

Mediastinitis is defined as the deep sternal wound infection associated with sternum osteomyelitis, and may also involve the retrosternal space [1].

Its incidence varies from 1% to 4% after heart surgery with sternotomy. However, it is a serious complication and causes mortality rates that range from 14% to 47%. It requires early and aggressive intervention, and often requires extensive debridement of the soft tissues, sternum and costal cartilages [2-4].

Surgical repair with omental or myocutaneous flap rotation can sometimes result in retraction, ischemia and tissue necrosis due to the large areas that must be covered [1,2].

In plastic surgery, myocutaneous the defects have been treated by using metallic shafts to reduce the tension of the wound's edges in order to allow for conventional suturing, as shown in Figures 1A and 1B [5]. 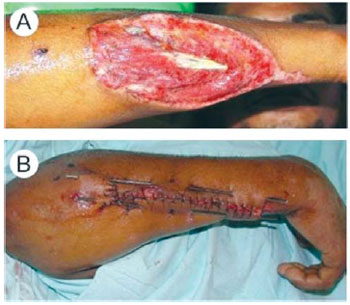 The aim of this study is to show the results of an alternative technique for the reconstruction of the chest wall in cases of severe myocutaneous defects from mediastinitis, using metallic shafts (Kirschner's wires) parallel to the wound's edges in order to increase the patch's mobility and reduce the tension on the suture line.

From July 2001 to February 2006, 1389 heart surgeries were performed at our institution. Eight patients (0.6%) had mediastinitis (seven were males). Seven patients had undergone coronary artery bypass grafting and one patient underwent correction for congenital heart disease. The mean age was 56.7 years. The mean time elapsed between the sternotomy and presentation of mediastinitis was 12.8 days (10-18 days). The associated co-morbidities were diabetes and obesity in seven patients, and malnutrition in one patient. In this study, mediastinitis was defined as the presence of a deep wound infection associated with sternal osteomyelitis with or without infection of the retrosternal space. Superficial infections without compromising the sternum - for which there was no need for extensive debridement and drainage [1] - were excluded. Obesity was defined by a body mass index greater than 30 kg/m2 registered in the perfusion records, and malnutrition was observed in pediatric patients, whose weights/ages were 90% lower than the 50th percentile. After obtaining the written informed consent, the patients underwent a two-phase treatment for mediastinitis.

1. Debridement of all devitalized tissue (soft, bone and cartilaginous parts), exposing the wound in order to perform chemical and/or activated charcoal debridement curative (papain 2%), until we could observe good granulation and negativity tissue formation of the local cultures, which took on average 20 days (Figure 2). 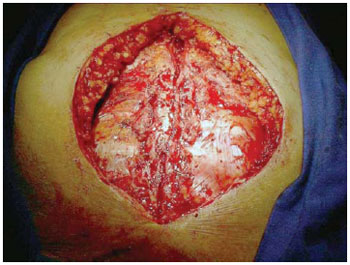 The cultures were performed through a weekly collection of tissue fragments during the curative process. In cultures the following germs were isolated: S. aureus (5 cases), E coli (1 case), S epidermidis (1 case) and P aeruginosa (1 case). Empirical broad spectrum antibiotic treatment was initiated with vancomycin and cefepime in all patients until we started antibioticotherapy (by specific-arteriogram).

Papain was used in curatives for the removal of fibrin from the wound bed and activated charcoal (Actisorb, Johnson & Johnson, São José dos Campos, Brazil) was used as an adsorbent and odor reducer when there was a large amount of exudate.

2. Mobilization of pectoralis myocutaneous flap from its wide dissection up to the anterior axillary line followed by placement of metal shafts of 3mm in diameter by 30cm in length (Kirschner's wire, MDT, São Paulo, Brazil) placed symmetrically and in parallel along the wound's edges, 5cm away from each skin edge, using an electric drill (Black & Decker, Uberaba, Brazil) (Figure 3); 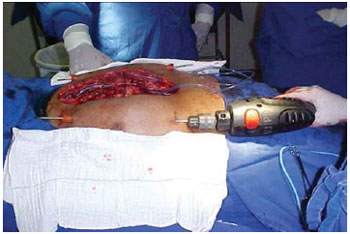 3. Approximation of the metal shafts with 3 total sutures of No. 5 braided polyester with 48-a mm semicircular needle (Ethibond Excel, Ethicon, São José dos Campos, Brazil) placed equidistant at the upper, middle and bottom thirds of the surgical wound (Figure 4); 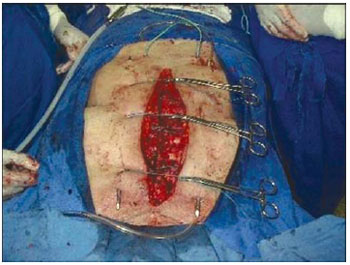 4. Vacuum suction drainage with drains of 3-4.8mm (Simon, P. Simon S/A, São Paulo, Brazil) placed as follows: one in the mediastinum and the other below each musculocutaneous flap. The postoperative treatment consisted of only wound cleaning with saline solution at 0.9% and protecting the edges of metal shafts with gauze and plastic drip to prevent injuries of cervical and submandibular regions due to the proximity of the wound;

5. Removal of suction drains when they became unproductive; that is, with a complete absence of suction flow over 12 consecutive hours (mean at 5th postoperative day);

6. Removal of the metal shafts on the 21th postoperative day is performed by cutting the total sutures, and tractioning of the shafts downward after the sterilization of their upper edges with chlorhexidine (Figure 5A and 5B).

During outpatient follow-up (minimum period of 6 months and maximum of 54 months), the patients presented uneventfully from surgery without fistulas, retractions and/or herniations, and with good stability of the chest wall.

Many factors have been associated with the development of mediastinitis after heart surgery; however, obesity, diabetes mellitus and chronic obstructive pulmonary disease have been presented as independent predictors of higher risk for the development of postoperative mediastinal infection [2.6].

Obesity and diabetes were present in seven of the patients in our group. Such a factor would classify them as individuals with mediastinitis type IIIB - according to the El Oakley et al. classification [1] - that is, infection arising 2 to 6 weeks after sternotomy and associated with one or more risk factors. Among the mechanisms that predispose the obese to infection, three of them can be emphasized: the improper tissue levels of prophylactic antibiotics used preoperatively in relation to the area of distribution; a large amount of fat tissue that can serve as a substrate for surgical wound infections, and the difficulty in preparing the patient's skin [6].

Diabetes, in turn, reduces resistance to infection because it has been shown that periods of hyperglycemia are associated with accelerated glycosylation and deactivation of immunoglobulins and C3 component of complement. Hyperglycemia also results in the glycosylation of newly synthesized collagen, the activation of collagenase and the reduction in collagen proportion in the surgical wound. Moreover, the white blood cells of diabetics show reduced bactericidal capacity and disturbances in adhesion, chemotaxis and phagocytosis [7].

Although the incidence of wound mediastinal infection in patients who have undergone median sternotomy for heart surgery is low, as shown in the literature and in our study, it is associated with high morbidity/mortality and high costs. There is no consensus about the best surgical treatment for median sternotomy impaired by infection. However, the wound debridement and removal of foreign materials seem to be essential steps for whatever the procedure used [8-13].

Diez et al. [14] showed that early aggressive debridement followed by late closure may reduce the surgical mortality rate to below 20%. These data do not differ much from those observed herein, in which the mortality was 25% (two cases).

Kirschner's wires are commonly used to repair bone fractures. They present different diameters and thicknesses (dependent on their flexibility); thus, in elliptical wounds, when the wire is passed through its edges, it takes a semicircular path, and, during correction, it transforms an elliptical wound into straight wound by approximating the edges in the middle of the wound with minimal tension. It makes the simple suture of these edges possible [5].

In a recent study, Omay et al. [15] showed the use of Kirschner's wires fixed in bilateral supraesternal position as an alternative in strengthening the closure of the sternum in cases of dehiscence after heart surgery. The authors obtained a good chest stabilization at the 24-month follow-up; however, this technique was used only in cases of aseptic dehiscence in which there was sufficient bone remaining to direct sternal suture.

In this study, the authors present an alternative technique for treatment of mediastinitis. It has been proven to be safe, effective, and a low-cost procedure for the reconstruction of major peripheral musculocutaneous lesions [5]. Similar results were observed in this study; however, the increase in casuistic and the long-term follow-up will allow for more evaluation of the effectiveness of this technique for mediastinal wound reconstruction.

In this group of patients, the chest wall reconstruction with the temporary use of metal shafts proved to be a safe procedure; it was effective and had good functional and aesthetic results.