We present a case of a 15-year-old white female teenage weighing 47.3 kg, born in Anhumas, São Paulo State. A year ago started a weariness and tachypnea picture to mild efforts followed by cyanosed lips and extremities. When at rest she felt better. She was referred to her cardiologist at her home town, and she was diagnosed with a mass in the right ventricle. The use of aspirin was suggested. In our pediatric service, she appears to be in a good general health, eupneic and acyanotic at rest, hydrated, and rosy. Cardiac and pulmonary auscultations were normal, abdomen with no changes. Pulse was palpable and symmetrical in both upper and lower members.

An electrocardiogram showed a sinus rhythm with a rate of 88 bpm; SÂP at +60º, ÂQRS + 90º, and QTc of 0.42 sec. PR interval and the other segments were within normal limits; Anomalous conduction through the right branch was highlighted by RSR' pattern in V1.

Visceral situs solitus in levocardia. The cardiac area was found to be within the normal limits; the transparency of pleuro-pulmonary fields was normal and the diaphragmatic cupulae were loose.

High-resolution computed tomography, after a contrast medium infusion, showed a hypodense image in the right ventricle (RV), and hilar and mediastinal lymphonodomegaly (Figure 1).

Nuclear magnetic resonance showed a roughly oval lesion with a signal similar to the cardiac muscle on T2-weighted image, localized deep into the RV, and measuring 50 x 40 mm at its greatest diameter (Figure 2).

Fig. 2 - Nuclear magnetic resonance - T2-weighted sequence - Image with intensity of signal similar to that of the cardiac muscle in the right ventricle

Echocardiogram showed a situs solitus in levocardia. Venoarterial, atrioventricular, and ventricle-arterial connections were concordant. The following were also observed: presence of a somewhat movable pediculated mass into the right ventricle overlapping the septal cusp of tricuspid valve, measuring approximately 30 x 10 mm, without ventricular-filling restriction and with a discrete valvular regurgitation.

Among all cardiac tumors, myxomas represent half of all primary cardiac tumors. Generally, myxomas occur singly but may be associated to familial autosomal dominant syndromes. The great majority of myxomas occurs in the left atrium, however, they can be present elsewhere [1]. The differential diagnosis is mainly performed with rhabdomyoma.

Echocardiography has been the gold standard for diagnosis, however due to the unusual tumor location other complement tests were performed aiming at to gather the most amount of information as possible as a support to surgical treatment. The eventual diagnosis only could be confirmed postoperatively through an anatomicopathologic test (Figure 3). 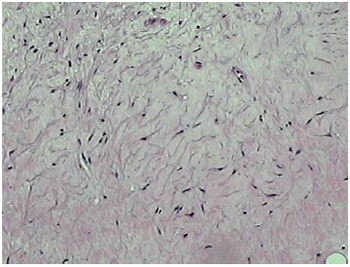 A median transsternal thoracotomy was performed with the establishment of a conventional cardiopulmonary bypass support with cannulation of venae cavae and aorta. Intermittent anterograde sanguineous cardioplegia at 32ºC was utilized. After the right atrium was opened, it was found a great mass with a fibrous gross aspect partially involving both septal and anterior cusps. The adherence of the tumor to the posterior cusp was complete (Figure 4). 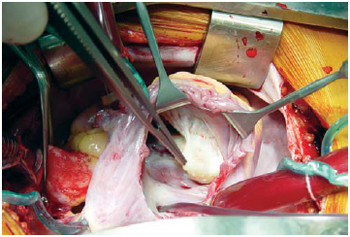 Although a comprehensive resection was performed, the right ventricle free wall and the papillary muscles were preserved. The tricuspid valve required surgical repair for correction and adequate functioning. The perfusion and ischemia time was 83 and 67 minutes, respectively.

Patient was discharged from hospital on the postoperative day 6. She was using furosemide and captopril due to a mild arterial hypertension which was found postoperatively. Three years after the surgery, the echocardiogram shows absence of the mass in the right ventricle and subtle valvular tricuspid regurgitation. The patient is asymptomatic and she is not currently under medication.