Five-month-old male infant, 3.1kg, white. Born by c-section with approximate somatic Capurro of 29 weeks which developed infant respiratory distress syndrome (IRDS), requiring treatment with exogenous surfactant and prolonged intubation. On that occasion, it was diagnosed as patent ductus arteriosus (PDA) with hemodynamic repercussion, which was treated with Indomethacin in the local hospital. The patient developed necrotizing enterocolitis and congestive heart failure, which was uncontrollable by medication.

The patient was transfered to our Service for surgical ligature for PDA, which presented a diameter similar to aortic isthimus. In the 32nd postoperative day, during a routine echocardiogram, a mass adhered to the heart was observed and, in that moment, it presented in good general condition (coloring, hydrated, eupneic and acyanotic). Physical exam and cardiac and pulmonary auscultation were regular.

Visceral situs solitus with levocardia. Cardiac area enlarged with CSA 0.62. Diffuse hyperlucency in pulmonary fields, more significantly in the left in perihilar region, suggesting interstitial-alveolar process (level of bronchopulmonary dysplasia). Image of metallic clips in a pulmonary artery viewing. In that viewing, it was possible to identify image of hyperlucency with irregular outlines in a postero-inferior plane of the cardiac profile, suggesting the presence of mass close to the ventricle (Figure 1). 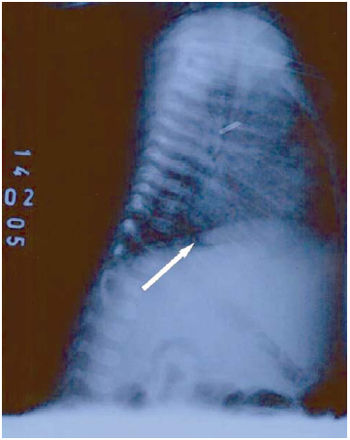 Fig. 1 - Chest radiography with presence of mass in the inferoposterior region

The solitary fibrous tumor is a generally benign mesenchymal neoplasia, originated in submesothelial cells. This tumor rarely has malign behavior, especially when it is possible to perform the complete exeresis of the lesion. It more frequently involves the pleura, but the appearance of this lesion in several organs and structures, such as bladder and eyeball, has already been reported and its presence in the heart is very rare, evident by the fact that we found only six adult cases in the literature.

In the diagnostic process, the echocardiogram showed the presence of mass, and a nuclear magnetic resonance was performed in order to provide more details. The resonance demonstrated a solid and uptake mass, closely contacted to the posterior wall of the atrioventricular transition. Obviously, the final diagnosis is histological, in which one can observe the fusocellular neoplasia with patternless aspect, confirmed by immunohistochemical positivity for CD34.

Median transsternal thoracotomy was performed and a conventional cardiopulmonary bypass circuit was established. Hypothermia at 32ºC was observed without cardiac arrest. The time of perfusion was 34 minutes. A hardened mass was found, extremely vascularized and pedunculated to the left atrium (Figures 2 and 3). The resection of the mass was performed with electric scalpel, avoiding lesion of the left atrium and the coronary arteries. The mass was hard and it was not adhered to the pericardium. The material was sent to a laboratory of Pathology for a microscopic examination, which showed diagnosis of solitary fibrous tumor. 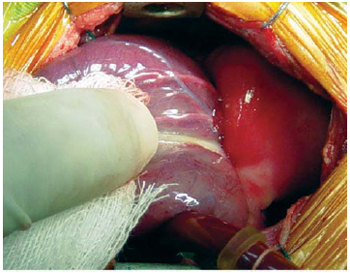 Fig. 2 - Mass aspect pediculated to the posterior atrioventricular sulcus and non-adhered to the pericardium 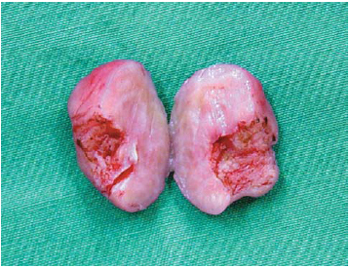 Fig. 3 - Macroscopy analysis of the hardened mass and homogeny after pediculated region ressection

The patient was discharged from hospital on 11th day of hospital stay with slight dilatation of the coronary arteries and some coronary-cavitary fistulas which were shown through an echocardiogram. The patient also presented regular cardiac function without medications.

After six months, the child was admitted to a local hospital presenting bronchiolitis, which developed into pneumonia and sepsis. The patient died four days after and there was no necropsy.

There are no reports, as we know, concerning to solitary fibrous tumor in children. However, the diagnosis was confirmed by immunohistochemical positivity for CD34 (Figures 4 and 5), and by the patternless aspect of the lesion when viewed in the hematoxilym-eosin (HE). The histological characteristics also suggested a benign lesion, although the growth of the tumor had occurred very fast [1,3]. 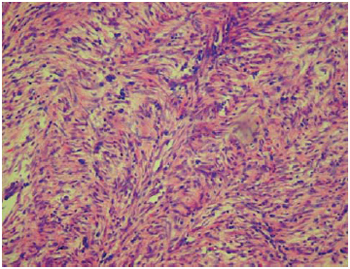 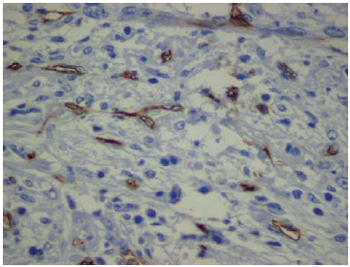 Fig 5 -Immunohistochemical marking for CD34, showing positivity in endothelial and in some tumoral cells (200X)