The intrapericardic cardiac tumors are infrequent; however, the clinical manifestations can be serious, even with symptoms of low cardiac output or cardiogenic shock, depending on the localization of the tumor. We report the case of a 3-month-old infant who progressed to cardiogenic shock due to an intrapericardic tumor compressing the right atrium and the vena cava superior. Emergent surgery for resection of the tumor mass was recommended. The patient had a 6-month uneventful postoperative course.

Among the tumors that involve the heart and the mediastinum in newborns and infants, those with intrapericardial location are infrequent and, among them, the most common are pericardial cysts and teratomas. The pericardial cyst is rare, generally asymptomatic and without evidences in the clinical examination, and it can be suspected by chest radiography that shows cardiac area or mediastinum enlargement. In most patients, the intrapericardial teratoma is symptomatic during the early childhood. The most prominent symptom is severe respiratory insufficiency secondary to pulmonary compression, and it is caused by the pericardium, which is entirely distended due to the tumor and the effusion. In the case of symptoms induced by tumors, they are due to the compression of vascular structures, such as superior and inferior vena cava, pulmonary veins or pulmonary trunk. The aim of this study is to report the case of a child with cardiogenic shock presentation who needed urgent surgical treatment.

Three-month-old infant presenting dyspnea since birth and low ponderal gain. Due to worsening of respiratory pattern, the patient arrived in the emergency room in serious condition, 10th percentile, presenting tachydyspnea and tachycardia. The patient was admitted to the hospital, and the physical examination evidenced normal arterial pressure, good peripheral perfusion and palpable pulses. A pulmonary auscultation showed sparse subcrepitant rales, and the cardiac auscultation showed muffled cardiac sound. The examination evidenced also hepatomegaly and palpable liver positioned to 3 or 4cm from the right costal margin. The chest radiography evidenced severe cardiac area enlargement (Figure 1). The electrocardiography showed decrease of the QRS complex voltage, and the echocardiography showed great intrapericardial mass on the right atrium and severe pericardial effusion, with signs of restriction, beyond pericardial effusion (Figure 2). 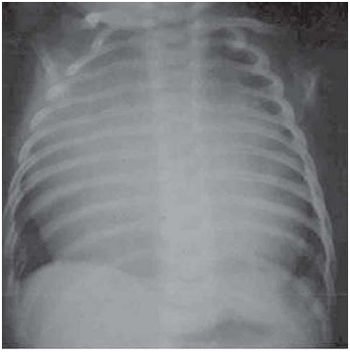 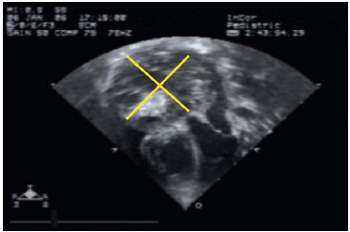 The patient received puncture guided by echocardiography, which removed 30ml of serousanguineous liquid without complications. Control echocardiography was performed 12 hours after puncture, which showed moderate volume of pericardial effusion with signs of systolic restriction. The patient had rapid clinical worsening and presented cardiogenic shock, and was sent to operating room, in which, after monitoring, median sternotomy and immediate improvement of the hemodynamic parameters were performed. A median pericardiotomy was also performed, in which a well shaped, whitish tumoral mass compressing the right atrium and the superior vena cava was identified, with moderate quantity of pericardial liquid with serosanguineous aspect. The mass was adhered by slim pedicle to the anterior face of the ascending aorta (Figure 3). A resection of this mass was performed. There was good immediate postoperative evolution. The tumoral mass presented approximate diameter of 4 to 4.5cm, and was sent to anatomicopathological study, which revealed that it was intrapericardial teratoma.

The child presented good evolution and was discharged from hospital without cardiac medications. Currently, six months after operation, the patient has been presenting good weight and height development without symptoms of cardiac origin. 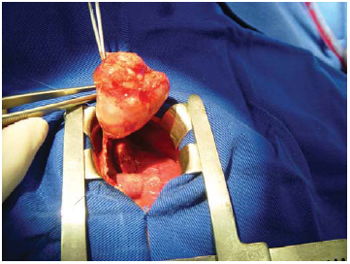 Teratomas are neoplasms that originate from pluripotent cells with uncertain incidence and without gender predominance, being more frequent in newborns and young infants [2]. When they are diagnosed in the neonatal period, the therapeutic option is the surgical excision. The complete resection of the teratomas provides good diagnostic, representing the only curative treatment. The surgical procedure is needed because the compression can affect the adjacent tissues. Additionally, the mediastinal tumors may present malignant transformation [3]. According to Miana et. al. [4], primary cardiac tumors are rare, and the great majority are benign and easily diagnosed; however, a yearly echocardiographic follow-up is recommended in order to potentially detect rare cases of recurrence. Authors, such as Cangemi et. al. [5], Heirigs and Mooss [6], suggested that the conservative treatment must be adopted in cases of asymptomatic patients with frequent clinical follow-up with the use of routine complementary examinations.

In this present study, the treatment sequence was similar; however, after pericardium opening, hemorrhagic fluid was not identified, suggesting a rapid progression of effusion, probably related to the compression of cardiac structures, or even improper effusion drainage after puncture. Patel et. al. [7] considered that the best noninvasive diagnostic method is the echocardiogram, because it distinguishes the lesion from vascular structures, shows the relation among structures, and follows the cyst's growth. Every diagnosis performed in our case was shown through echocardiography, which plays an important role in the cardiac tumor evaluation and its intracardiac relations [8]. This procedure could also show signs of systolic restriction. The immediate surgical procedure was a significant factor in the tumor resection and complete relief of symptoms.

We can conclude that the puncture guided by echocardiography can relieve a cardiogenic shock presentation caused by an intrapericardial tumor, although the surgical procedure is an effective way in the definitive cure in such cases.