Some challenges have to be faced. The major ones were as follows: to improve the quality of the journal, which had already an excellent level, thanks to the devoted work accomplished by the former editors, Prof. Dr. Adib Jatene and Prof. Dr. Fabio Jatene; to provide a SciELO online English edition; to provide online submission and review of the manuscripts; and most importantly, to achieve the inclusion of BJCVS/RBCCV in PubMed/Medline, a dream by itself.

In order to carry out the changes with a greater efficacy, the editorial staff was transferred to São José do Rio Preto, SP, where the Editor routinely works. Afterwards, a journalist, Ricardo Brandau, was hired as Executive Editor; the printing and publishing remained up to Heber Janes Ferreira, a skilful, seasoned professional with a solid experience. The Editorial Assistant, Dra. Rosangela Monteiro, biologist, holding the position as far back as 1998 was kept in her position due to her experience in the production process and her scientific knowledge. 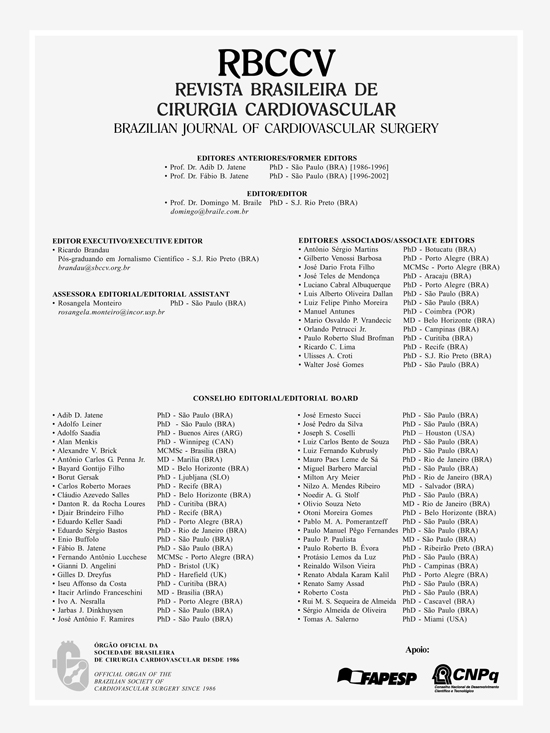 Fig. 1 - Reproduction of the Brazilian Journal of Cardiovascular Surgery/Revista Brasileira de Cirurgia Cardiovascular office hours with the Editorial Board and Associate Editors.

Thus, we had a motivated, results-oriented team with a highly effective capacity to perform the tasks required to succeed the goals established.

The next step was to change the graphic design, including the cover and the interior with a modern layout. Over these six years, other changes were made, in order to provide an easy and pleasant reading (Figure 2). New sections and classes of articles were created as follows: clinical-surgical correlation, "how-I-do", Practice experience, etc., affording a greater participation of our associates, thus turning the journal into a forum favorable to change experiences. 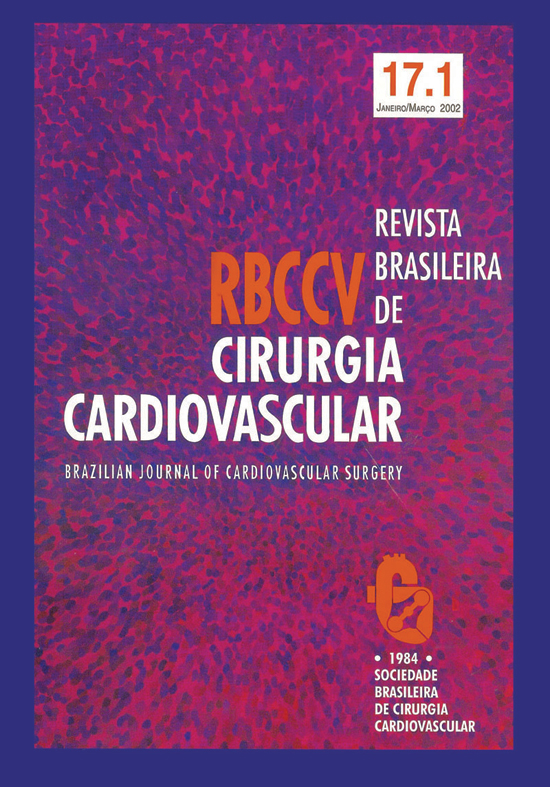 Fig. 2A - Reproduction of the front cover of volume 17.1, the last one to be printed ptior to the current administration. 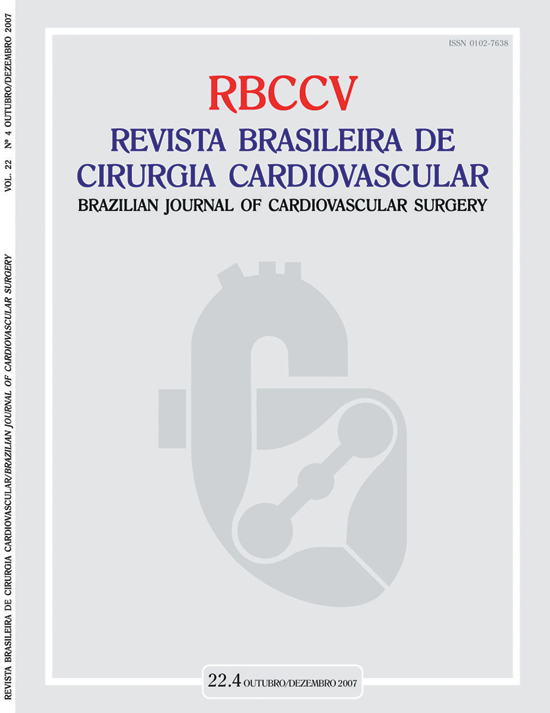 Also, limits for each article class were established (number of characters in the title, words, images, and references, always seeking for a better pattern. This procedure is being adopted in the major international scientific publications.

Concurrently, aiming at to give a greater thrust to the computerization of BJCVS/RBCCV an evaluation form was adopted and delivered by e-mail to reviewers along with the manuscript. Comments and notes regarding several work-related issues were required from the reviewers in order to accelerate their work as well as the authors'. Reviewers and authors had a script to be followed regarding all important matters. Thus, the flow time of a job could be reduced. In order to provide a better guidance of how to fulfil the form, instructions were attached to the form.

The following step would be to make BJCVS an international journal. The first measure taken was to make all the online articles available in SciELO translated into English. Thus, the BJCVS/RBCCV would have its visibility increased and by doing so it could start receiving manuscripts from other countries, which did happen. From Volume 17.4 (Oct-Dec 2002) to Volume 18.4 (Oct-Dec 2003), all the articles were available in English.

From Volume 19 (Jan-Mar 2004), with the adoption by SciELO of a new interface which allowed the online bilingual availability of the articles, the BJCVS/RBCCV started to dispose, on an online version, both idioms Portuguese and English as well. This method and process of disposing the articles in both languages is currently used up to now.

Also, aiming at increasing the international visibility of BJCVS/RBCCV, it inclusion in CTSnet portal website (www.ctsnet.org) was required, where since 2002, there is a link to BJCVS/RBCCV web page that along with some other important international publications is inserted as part of "Other Cardiovascular Journals" section as a research option.

Information to the authors

Considering our role in the scientific education of BSCVS/SBCCV, particularly of the younger members, we have published a series of articles comprising important aspects of scientific methodology, such as General guidance to writing scientific Works; Statistical Methods; The ways of searching/mining scientific information; the importance of the correct use of the descriptors in scientific articles; Medical Expressions: shortcomings and suitability; Authorship Criteria regarding Scientific Paper: a sensitive and controversial issue.

We believe that these articles were useful to assist the authors in preparing and elaborating their manuscripts because, increasingly, the articles are being presented with a more suitable adequacy to the norms of BJCVS/RBCCV and to the international scientific patterns.

Finally, in 2005, after many tenures and relying on the essential support of BSCVS/SBCCV in the process feasibility, BSCVS/SBCCV achieved to have its own website (www.rbccv.org.br), which would be used to submit and review of the manuscripts, besides free access to all BJCVS/ RBCCV content as far back as 1997. The software was developed by GN1 and has many useful tools for authors and reviewers allowing them to follow the current papers being peered reviewed.

The website is bilingual (Portuguese-English). At the first webpage, it is possible to submit manuscripts, just entering your login and password filling in the respective blanks. There is also a link with instructions concerning its functioning (Figure 3). 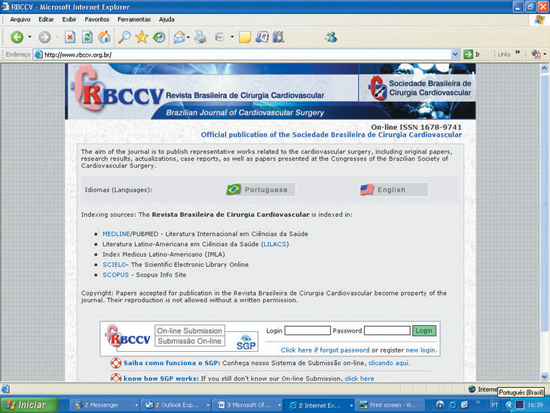 Among the available resources are the following: previous editions since 1997 with full text content and links such as "Advanced Search" which allows searching items like articles, authors, keywords; norms of RBCCV; norms of Vancouver; and "Hearing report", which enables to verify which articles are the most visited ones. In order to provide an easier submission and review process, there are links to "DeCS" and "MeSH" which allow crossing references and "Mail" to send messages.

The website is continually being improved over the years in order to become more complete and easier to navigate. Its success can be evaluated by the high visit index numbers, including visits from abroad, from where BJCVS/RBCCV has received a significant number of submissions. The average reaches more than 2000 daily visits. Figures in which the visits to RBCCV and SciELO are added according to the charts below (Figure 4). 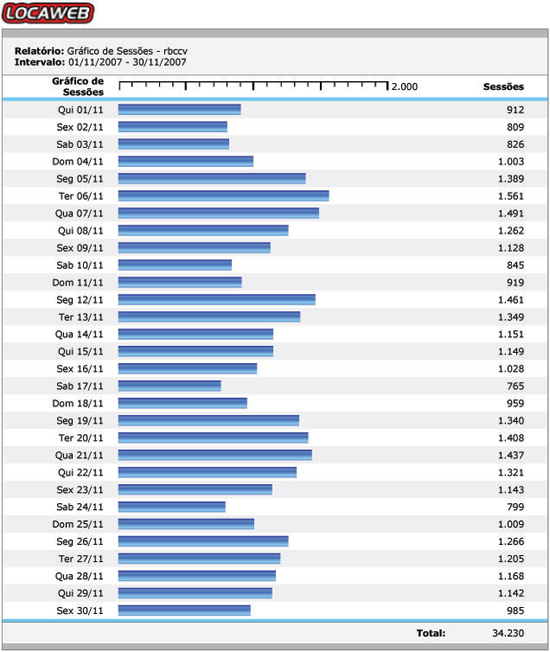 In 2005, always seeking more international insertion, we managed to index BJCVS/RBCCV in an important European database, the Index Copernicus (www.cisi.org), which gather the most prestigious worldwide scientific publications.

Afterwards, in 2006, we were accepted to be indexed in SCOPUS, one of the most comprehensive scientific databases currently available. It is sponsored by Elsevier which indexes more than 15,000 journals, nearly 265 millions WebPages from the Internet, 18 million patents, besides other documents.

The major accomplishment of the current administration was the achievement of BJCVS/RBCCV indexing in PubMed/ Medline, the most important online database concerning the international medical field designed to biomedical scientific journals sponsored by the USA National Library of Medicine (NLM).

BJCVS/RBCCV had already tried to be admitted in two previous occasions: 1998 and 2004. The last refusal has broken Dr. Braile's heart, which with persistence managed to schedule a meeting with Medline Administrator, Dr. Sheldon Kotzin, in May 4 2007. In this historical meeting, BJCVS/RBCCV was presented by Dr. Braile to Dr. Kotzin which praised the journal. Dr. Kotzin also provided useful information to achieve a successful submission.

The BJCVS/RBCCV editorial board, with full support of Bireme and SciELo teams to fulfil the form correctly according to Medline patterns, has devoted enthusiastically to develop the changes, refinement and format of the journal. In October 31 2007, we received a letter officially communicating that we have, at last, been accepted (Figure 5). 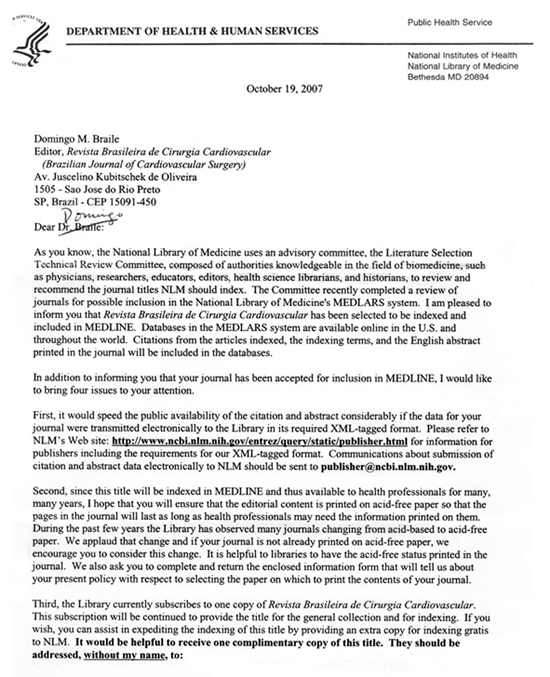 Fig.5 - Facsimile of the original communication from Medline.

The abstracts, in English, of RBCCV/BJCVS articles are already available in PubMed/Medline, starting with Volume 1 2007. To be indexed does not mean "Period!" or na "end stop", but the beginning of a new phase, meaning "cautions considerably increased" in order to keep the editorial highstandards required as in the scientific content as in the layout, because the journal will be periodically evaluated.

Over these six years, we have sought to assist both authors and reviewers at the best of our efforts - personally, by telephone, or e-mail - in order to clarify the doubts regarding both manuscript submission and review, and from 2005 on, regarding the website functioning. In mid-2006, with the purpose of assisting in research to write scientific papers to be submitted to the journal, BJCVS/RBCCV started sending to those who required, PDF copy of the full text of the articles published in the best international scientific journals regarding the specific field.

In the first year, 278 articles were required. In 2007, this figure reached 338 requests, proving the hit of the decision, which benefits everyone, because it allows the access to the latest productions in worldwide international literature, providing better articles to be written.

The figures show that the work developed by the Editorial Board which tirelessly and unremittingly has sought to correct the failures and to improve BJCVS/RBCCV - relying always on the priceless support of Editors, Associates, Editorial Board, Board of Directors, and Reviewers - yielded impressive outcomes. Over this period, 24 editions were issued rigorously up-to-date, totalizing 2,669 pages. RBCCV/BJCVS has an increasingly growing yearly insertion, which is reflected upon the amount of paper published (Table 1). 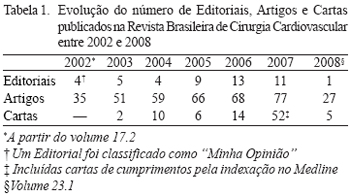 We cannot forget to highlight the trust of sponsors and advertisers in our work as well as the financial support of CNPq and Capes, which were critical to RBCCV/BJCVS to keep its quality patter throughout this period.

The pathway is open to new accomplishments. The next step will be to get indexed in ISI. The forms are being fulfilled and in this same very year we will submit the request to become formally accepted. We are aware that it will not be easy to maintain the excellence level achieved, but we will keep going with the same effort and dedication, hoping that the next six years will be so advantageous for RBCCV/BJCVS as well as for the Brazilian Cardiovascular Surgery as it was before.