A male, negro child of 3 years and four months weighing 13.5 kg was admitted to hospital. The infant had been premature; born at 32 weeks with congenital club foot, bilateral inguinal and umbilical hernias as well as significant bulging of the left hemithorax. At 10 months of age, adoption of the squatting position was observed as was a cardiac murmur and so the baby was referred to a cardiologist when congenital heart disease requiring surgical treatment was diagnosed. At admittance he was in a good general state, ruddy, hydrated, dyspneic at slight effort and cyanotic +/6. The thorax was asymmetrical with bulging to the left, ictus cordis was palpable at the 4th intercostal space with a regular heart rhythm with two normal clicks and with a systolic ejective murmur +/6 at the high middle left sternal border. Pulmonary auscultation was normal. The liver was positioned at the right costal margin and there was bilateral scarring due to the repair of the hernias. The blood pressures and pulses of his four limbs were normal with a peripheral saturation of 89%. There was scarring on the feet.

The electrocardiogram showed sinus rhythm and a heart beat of 125 bpm. Additionally the ÂP was 0, the ÂQRS was + 60º, the PR interval was 0.16 seconds, QTc interval 0.52 seconds and QRS interval 0.08 seconds. There were no direct signs of atrial or ventricular overload.

The radiogram showed visceral situs solitus. The rib cage was deformed with 11 costal arches on the right and 8 on the left with no fusion of the 1st and 3rd left costal arches. The curvature of the thoracic axis was to the right and the lumbar axis to the left. The cardiothoracic index was 0.64 with prominence of the right chambers. There were signs of the aortic arch positioned to the right with a small dislocation of the trachea to the left. There was also a slight reduction in the pulmonary vascular network best seen at the edges. The middle arch was bulged. The mediastinum was widened and adapted to the left. Hilar opacity was seen to the right above the silhouette of the heart (Figure 1).

The echocardiogram diagnosed tetralogy of Fallot clarifying anatomical aspects and showing the need for surgical intervention, but did not demonstrate the juxtaposition of the atrial appendages to the right which is suggested by the radiological image. This is a rare and extremely complicated diagnosis for physicians without experienced of congenital heart diseases.

Median transsternal thoracotomy was performed and a cardiopulmonary bypass was established with one arterial and three venous (two superior and one inferior vena cava) cannulae. Hypothermia at 28 ºC and intermittent hypothermic anterograde sanguineous cardioplegia at 4 ºC were used. After opening the pericardium, the presence of a left atrial appendage juxtaposed to the right atrial appendage and the right atrium was noted (Figure 2) giving juxtaposition of the atrial appendages to the right. The pulmonary arterial trunk was opened showing the pulmonary valve with normal characteristics and stenosis of the right ventricle outflow tract which was resectioned. The interventricular shunt was corrected by the normal method through the right atrium with single sutures and a bovine pericardial patch. The perfusion and myocardial ischemia times were 134 and 111 minutes, respectively. In the immediate postoperative period, the patient presented with a slight effusion on the right and Functional Class I (NYHA) heart failure and was hence treated with 3 mg/kg/day furosemid. The infant was released on the 6th postoperative day. A follow-up echocardiogram after one week demonstrated good ventricular functioning; there were no pericardial or pleural effusions or residual injuries. It was clear that the presence of juxtaposition of the appendages to the right is difficult to diagnose prior to surgery, however it did not create technical difficulties as its correction through the right atrium and the pulmonary trunk are routinely performed with Tetralogy of Fallot [1]. 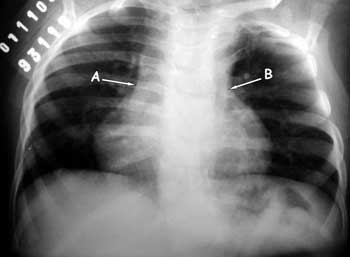 Fig. 1 - Chest radiogram: A - Hilar opacity above the right heart silhouette suggestive of left atrial appendage juxtaposed to the right. B - Widening with adjustment of the mediastinum to the left probably due to the persistent left superior vena cava 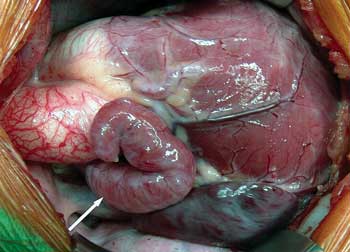